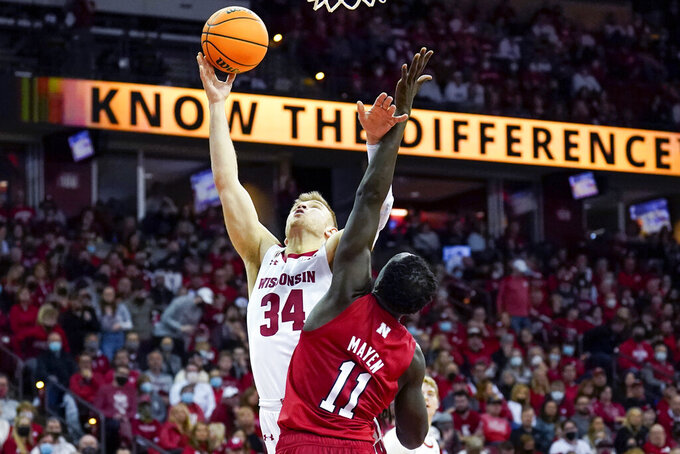 MADISON, Wis. (AP) — Tenth-ranked Wisconsin lost leading scorer Johnny Davis when he was injured on a flagrant foul early in the second half, and the Badgers missed a chance to clinch the Big Ten title outright by falling to Nebraska 74-73 Sunday.

Davis was hurt when he was fouled on a layup try by Trey McGowens with 17:32 left. Davis went to the locker room and didn’t return to the bench, and the Badgers said he was out with a lower body injury.

Davis averages 20.3 points and 8.3 rebounds. He scored 10 before being injured by McGowens, who was ejected.

“The officials knew my thoughts, and knew them actually before it happened on some other things that I saw. I’ll leave it at that and I’ll watch the replay and I’ll make the necessary phone calls," Gard said.

Wisconsin (24-6, 15-5) now must settle for sharing the title with No. 20 Illinois, which beat No. 24 Iowa 74-72 on Sunday night. Illinois will be the top seed in the Big Ten Tournament that begins Wednesday at Indianapolis.

Chucky Hepburn hit two of three free throws for Wisconsin with 19.8 remaining, cutting the deficit to 74-73 as Verge fouled out.

CJ. Wilcher missed the front end of the bonus for Nebraska, but Hepburn — who beat No. 8 Purdue on Tuesday with a last-second 3-pointer — missed a 3-point try from the top right and the Huskers secured the rebound

“He hits one Tuesday night that’s highly contested off the glass and he has one wide open, he hasn’t had one that wide open in practice for a long time, so that’s part of it,” Gard said. “We got a clean look at the rim, but there was a lot of other things that went into us not having success today.”

Nebraska played with leading scorer Bryce McGowens — Trey’s brother — who averages 17 points per game and injured his hand in a victory over Ohio State on Tuesday.

Brad Davison scored 20 points for Wisconsin, which had won five in a row. Tyler Wahl and Chris Vogt added 13 apiece.

“This stings, and this wasn’t us in a lot of different of ways, but let’s not lose sight … the day wasn’t good, but the season has been fantastic,” Gard said.

“We’ve got obviously more to play. We’ll see where we’re going to be on Friday in terms of game time and those type of things, but everybody’s 0-0 and you move on to the next one and get ready to go," he said.

Wisconsin trailed by 12 midway through the first half. The Badgers rallied with a 12-2 run, going in front 49-47 on two free throws by Davison and were in the bonus for the final 16:18.

Verge tied it with a lay-in, but was called for a technical, sending him to the bench with his fourth foul. Davison hit both free throws to start a string of eight consecutive points from the line to give Wisconsin a 57-49 lead with 13:40 left.

Wisconsin had been averaging only 8.6 turnovers per game, fewest in Division I. But the Badgers committed seven in the first 10 minutes as Nebraska surged to a 30-18 lead, hitting 12 of 21 shots.

Nebraska: The Cornhuskers finish the regular season on a three-game winning streak and have beaten Top 25 opponents away from home in each of their last two games. Nebraska won 78-70 at No. 23 Ohio State on Tuesday.

Wisconsin: The Badgers squandered a chance to win the Big Ten title outright for the first time since 2015 and now will be the No. 2 seed in the conference tournament. Their chances of making a deep postseason run could depend on Davis' health. ... Wisconsin had won each of the last 15 times it had played a game decided by six points or fewer.

Although the Badgers topped No. 8 Purdue 70-67 on Tuesday, the loss to Nebraska could drop them in the poll.

Nebraska is the No. 13 seed in the Big Ten Tournament and faces Northwestern in a first-round game Wednesday.

Wisconsin plays Friday against Michigan State or Maryland in the quarterfinals of the Big Ten tournament.