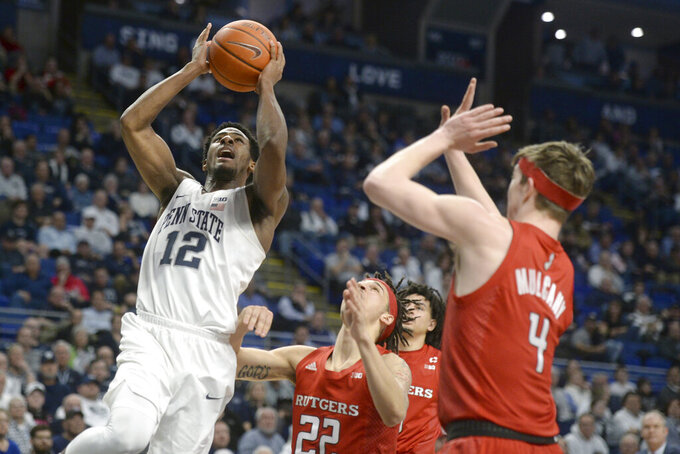 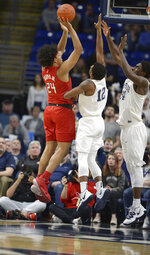 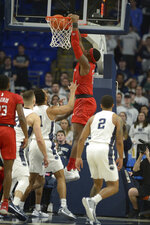 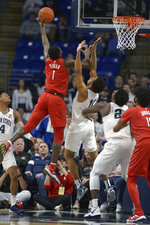 He may want to show his Nittany Lions replays of Myles Dread’s effort from Wednesday night.

Dread hit a go-ahead 3-pointer with 28 seconds left to lift Penn State over Rutgers 65-64 after the Nittany Lions blew a 21-point lead. Akwasi Yeboah missed a 3-pointer the other way and Dread was swarmed by his teammates who snapped a two-game losing streak.

But coming out of the huddle with his team suddenly trailing after a Geo Baker jumper, Dread didn’t know he would get the ball.

The play was designed to go to Penn State’s leading scorer Lamar Stevens for an inside shot that Penn State hoped would send the game to overtime.

When Dread was left alone behind the arc, however, Izaiah Brockington found him.

“When the play’s designed for Lamar, and I come off and knock it down, that just goes to show how much my teammates believe in me,” Dread said. “If I don’t shoot, I don’t play.”

“That game could’ve got ugly and it didn’t,” Rutgers coach Steve Pikiell said. “Our guys battled and stayed the course.”

Trailing 40-19 late in the first half, the Scarlet Knights tied the game at 62 with 1:32 left on Geo Baker’s layup. His jumper gave Rutgers a two-point lead with 42 seconds remaining before Dread’s big shot handed Rutgers (18-11, 9-9) its third-straight loss.

Jacob Young scored 13 points for the Scarlet Knights who rallied after Penn State led by double digits well into the second half.

They cut it to 51-50 with a 15-2 run that began as Young found ways to penetrate Penn State’s defense.

Young, who entered the night averaging eight points per game, hit a layup with 14:45 left and added two more along with a dunk from Ron Harper Jr. and a layup from Myles Johnson to pull the Scarlet Knights within a point with 10:03 left.

Stevens scored the next two baskets and Penn State got some more offense to go back up by 10.

Both teams played sturdy defense early before the Nittany Lions edged ahead 13-10 eight minutes in. Stevens increased his team’s lead with a 3-pointer from the corner two minutes later. Stevens’ first make of the game sparked a 27-9 run to make it a 21-point lead.

But he appears to be nearing a return.

Jones, who was averaging 14.1 points per game before going out of the lineup, warmed up with the team in shorts and a tank top and appeared to work up a bit of a sweat. He was 2-for-3 on 3-pointers over the final two minutes of the team’s shootaround. Chambers would only say Jones would play once team doctors clear him to do so.

The Nittany Lions turned a bizarre sequence into quick points late in the first. With just over four minutes to play, John Harrar rainbowed an inbounds pass over a Rutgers defender toward Jamari Wheeler. But before it reached him, the ball bounced awkwardly off Penn State’s glass and Wheeler had to scramble to prevent it from careening out of bounds.

The speedy Wheeler calmly corralled it, fired it down the court to Stevens who made an easy layup.

Rutgers: The Scarlet Knights have had a season to remember, but most of the highlights came in the first half when they went 12-3 up until Jan. 7. Since then they’re 6-8.

Penn State: The Nittany Lions have been coughing up big leads in the second half of the season. They needed to halt their skid and were able to do so, though coach Patrick Chambers still wants his team to develop a killer instinct to put teams away.

Rutgers: Hosts No. 9 Maryland on Tuesday.