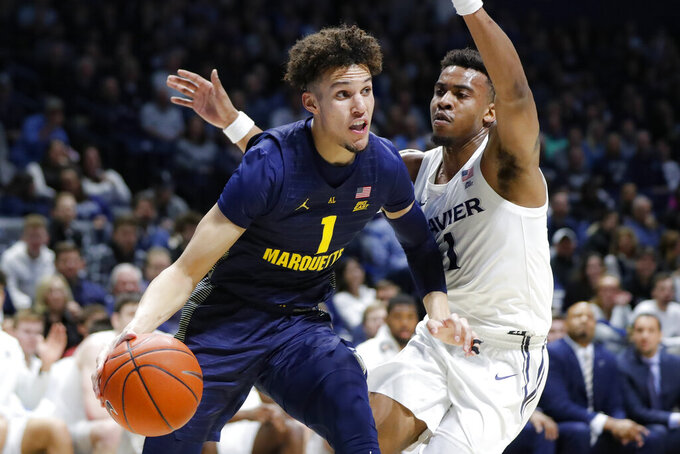 FILE - In this Wednesday, Jan. 29, 2020, file photo, Marquette's Brendan Bailey, left, drives against Xavier's Paul Scruggs (1) during the first half of an NCAA college basketball game in Cincinnati. Bailey is bypassing his final two seasons of eligibility to pursue a pro career. (AP Photo/John Minchillo, File)

Bailey had entered his name into consideration for the NBA draft in April but still had the option of returning to school. Bailey and Marquette coach Steve Wojciechowski announced Friday that Bailey was indeed moving forward with his pro career.

“This has always been a dream of mine, and Marquette has helped prepare me to make this dream a reality,” Bailey said in a statement issued by the university.

Bailey, the son of former Utah Jazz and Minnesota Timberwolves forward Thurl Bailey, will turn 23 on June 9. He spent two years on a mission with the Church of Jesus Christ of Latter-day Saints between the end of his high school career and the start of his Marquette career.

“We are thankful for his contributions to our program the last two seasons and will do all we can to assist him with the process,” Wojciechowski said in a statement. “His best basketball is ahead of him and we can’t wait to see where his journey takes him next.”