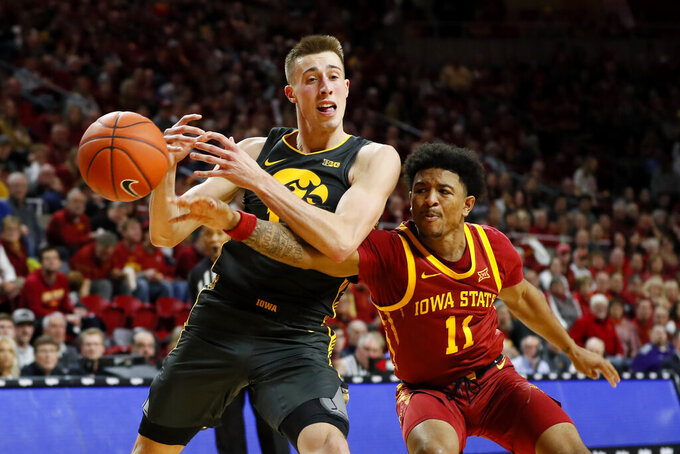 That’s how long it had been since the Hawkeyes won on the road against in-state rival Iowa State.

That changed on Thursday night.

Iowa (8-3) snapped an eight-game losing streak at Hilton Coliseum. The Hawkeyes hadn’t won in the Cyclones’ home since a victory in the 2003 NIT.

“It’s huge,” Wieskamp said. “This is probably the one game on the schedule I look at the most.”

The Hawkeyes struck early and held off two bursts from the Cyclones in the second half.

“I think the important thing, when you’re playing on the road against a good team, a well-coached team, it’s important to get off to a good start,” Iowa coach Fran McCaffery said. “And we did.”

“We got embarrassed,” Iowa State coach Steve Prohm said. “We've got to live with it.”

The Hawkeyes had an answer. Connor McCaffery hit a 3-pointer, then Wieskamp scored on a fastbreak and was fouled. His free throw gave Iowa a 50-37 lead.

“They wanted it more than us,” Haliburton said. “They played harder than us.”

Iowa: The Hawkeyes have gone 4-2 in a stretch of games that included two neutral-court games and three road games.

Iowa State: The Cyclones were coming off a 76-66 home win over a ranked Seton Hall team and appeared to have bounced back after losing two of three games in the Battle 4 Atlantis tournament.

Bohannon, coming back from offseason hip surgery, played his 10th game of the season. That is the limit if he wants to apply for a medical redshirt season and get a full season of eligibility next year.

Bohannon said he still hadn’t made up his mind whether to try to finish the season.

“If I come out Wednesday or Thursday after finals, and I feel great, there’s still a chance I’m going to play,” Bohannon said. “We’re going to enjoy this tonight, and worry about it next week.”

Regardless of his decision, Bohannon played his last game at Hilton Coliseum. He left his shoes on the court, with the message, “To ISU, thanks for the mems.”

“There wasn’t a lot of space on the shoes,” Bohannon said.

Iowa: The Hawkeyes are off until a Dec. 21 game against Cincinnati in Chicago.