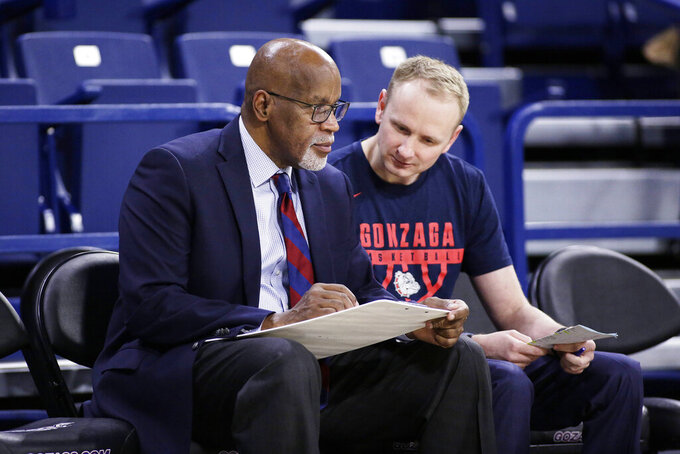 FILE - Gonzaga assistant coach Donny Daniels, left, and director of basketball operations Stephen Gentry speak before an NCAA college basketball game against Texas-Arlington in Spokane, Wash., in this Tuesday, Dec. 18, 2018, file photo. Former Gonzaga player and former Gonzaga director of operations Stephen Gentry was hired Monday, May 24, 2021, as an assistant basketball coach to replace Tommy Lloyd, who left the Bulldogs to become the head coach at Arizona. Gentry was most recently an assistant coach at Illinois. (AP Photo/Young Kwak, File)

Gentry was most recently an assistant coach at Illinois.

“It is great to have Stephen back in the program,” Gonzaga coach Mark Few said. “He knows the program, having played and coached here previously, but has also garnered some other tremendous coaching experiences, most recently doing a great job helping Illinois back to national prominence.”

Gentry said he is honored to return to Gonzaga “and serve a program that has meant so much to me.”

Gentry oversaw schematic changes on offense and defense at Illinois during the past two seasons. The Illini posted back-to-back 20-win seasons for the first time since 2013-14 and earned two straight NCAA Tournament berths during his time there.

Illinois was a top seed in this year's tournament. Gonzaga was the top overall seed this year and advanced to the title game, where the Bulldogs lost to Baylor.

He was Gonzaga’s director of operations in 2017-18 and 2018-19. Before that, Gentry was an assistant at Texas A&M, Stephen F. Austin and Oklahoma State.