Gonzaga relishes presence of other mid-majors in NCAAs 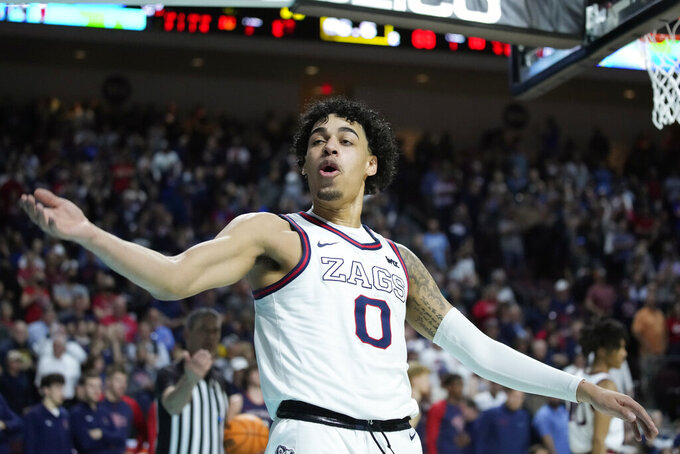 PORTLAND, Ore. (AP) — While Gonzaga is the king of the mid-majors come tournament time, the Bulldogs are happy to spread some of that attention around.

The top-seeded Zags (26-3) are one of three West Coast Conference teams in the NCAA Tournament, along with Saint Mary's, the only team to beat Gonzaga in conference play this season, and upstart San Francisco.

It's just the third time the WCC has sent three teams to the tourney.

The Mountain West has four teams in this year's tournament, most since 2013 and most of any mid-major conference this year. They include Boise State, Colorado State, San Diego State and Wyoming, which lost to Indiana in the First Four on Tuesday night.

“So all this Power Five stuff, you know, it’s getting pretty old now,” Gonzaga's Drew Timme said with a laugh.

Gonzaga has had so much success both in the regular season and the tournament that the Bulldogs long ago graduated from plucky mid-major to established powerhouse — a major-mid-major. Still missing for Gonzaga is that elusive national championship. They lost to Baylor in the title game last season and fell to North Carolina in the 2017 championship game.

Gonzaga's quest to finally add that championship banner opens with the Bulldogs facing No. 16 seed Georgia State on Thursday in Portland. Joining the top-ranked Bulldogs in Portland is No. 8 seed Boise State, which will face ninth-seeded Memphis.

Other West Region games Thursday include fourth-seeded Arkansas against No. 13 Vermont, and fifth-seeded UConn versus No. 12 seed New Mexico State. Both games are in Buffalo, New York.

If Gonzaga and Boise State both win, the two will meet in a second-round game Saturday. If that happens, Gonzaga will push aside its mid-major pride and focus on the game, which would pit Gonzaga coach Mark Few against former longtime assistant Leon Rice.

“You want to root for them every game but at this point, it’s the NCAA Tournament, it’s just about who you’re going to play next and getting the wins,” Few said.

Since the tournament expanded in 1985, UNLV is the only team considered a mid-major to have won an NCAA title, toppling Duke in 1990.

For now, Gonzaga's sole focus is on Georgia State (18-10), a fellow mid-major from the Sun Belt Conference. The Panthers are making their fourth NCAA appearance in eight years.

Georgia State heads into the tournament on a 10-game winning streak, capped by an 80-71 win over Louisiana in the Sun Belt championship.

Only once has a No. 16 seed knocked off a No. 1 seed: UMBC's shocking take down of Virginia in 2018. Virginia was the No. 1 overall seed in the tournament that year, just as the Zags are this year.

The Broncos (27-7 ) won their first Mountain West regular-season title then claimed the team's first conference tournament title with a victory over San Diego State. Along the way, Boise State ran up a 14-game winning streak and collected the most wins in program history.

“We have confidence in ourselves. We made history but there’s still more we want to accomplish,” guard Emmanuel Akot said. “We’re going in and taking it moment by moment.”

They'll face Memphis (21-10), which is back in the tournament for the first time since 2014. Jalen Duren was the American freshman of the year, but the Tigers have been without Emoni Bates since late January due to a back injury. Bates did travel with the team to Portland but coach Penny Hardaway was noncommittal about whether he'd play.

UConn (23-9) is coming off a loss to Villanova in the Big East tournament. But the Huskies may have gotten lucky by landing in Buffalo — that's where they played first- and second-round games before winning national championships in 2004 and 2014. Overall, UConn has four national championships.

The Huskies face New Mexico State (26-6), which beat Abilene Christian for the WAC tournament title and the automatic berth — marking the team's 23rd overall appearance in the Big Dance. New Mexico State went to the Final Four in 1970 but lost to UCLA.

“Teddy plays with a lot of pop and a lot of personality and intensity. I don’t know if there’s anyone in the Big East that we’ve played against that has that type of release, and you just have to stay down and be disciplined against him because he has so much stuff off the dribble. And he is so good with head fakes and shoulder fakes and you just got to stay down and be the second guy to leave the floor and not be overly aggressive against him because he is an unbelievable counter-puncher,” Hurley said.

“He just blowing that pregame smoke,” Allen said. “You know how that goes. I ain’t listening to that.”

He added, laughing, “Dan Hurley is the best coach ever.”

Coach Eric Musselman is making his fifth NCAA Tournament appearance and second in three years at Arkansas. Last year, the Razorbacks made a run to the Elite Eight.

Vermont (28-5) rolled to its eighth NCAA Tournament appearance with an 82-43 win over UMBC in the American East title game. Coach John Becker was asked about how blowing through the conference tournament might be less-than-ideal preparation.

“We put the tape on of Arkansas and it recalibrated our guys pretty quickly,” Becker said.