Hardaway brings Memphis back to NCAAs after long absence 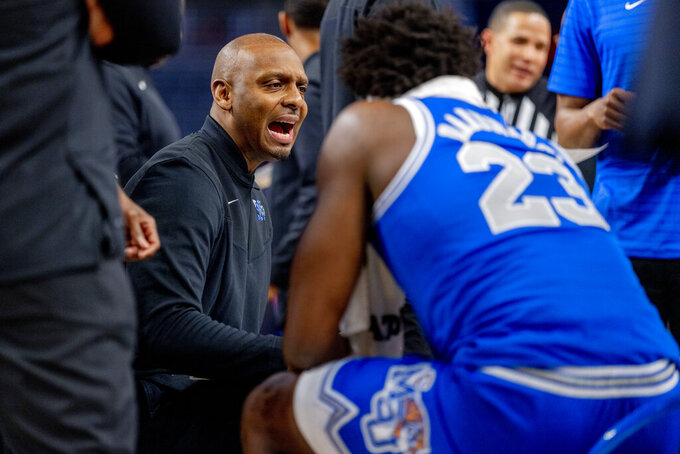 Memphis head coach Penny Hardaway instructs his team during a timeout the first half of an NCAA college basketball game against SMU in the semifinals of the American Athletic Conference tournament in Fort Worth, Texas, Saturday, March 12, 2022. (AP Photo/Gareth Patterson) 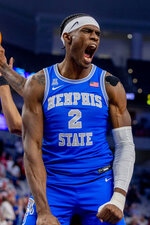 PORTLAND, Ore. (AP) — Alex Lomax remembers watching as a kid as Memphis made a run to the national title game in 2008, just as Penny Hardaway remembers watching great Tigers teams from when he was a kid on a TV that had been rolled into his classroom.

Their combined memories are an indication of Memphis basketball's connection to the community and what it means for the Tigers to be back in the NCAA Tournament.

“The more the Tigers win, the happier the city is. That’s just a feeling that I can remember back when my family, my uncles and my aunties just being very excited every time the Tigers was playing, and every time they got a win in March Madness, the city would just go crazy,” said Lomax, the Tigers' starting guard. "Everybody would tune in, and the energy would just be ecstatic. A couple years later, here I am.”

Memphis’ first game in the tournament since 2014 is Thursday when the ninth-seeded Tigers face No. 8 seed Boise State in the West Region first round.

The No. 9 seed for the Tigers (21-10) could be seen by some as an underachievement considering the expectations that accompanied Memphis to begin the season. The Tigers began the season ranked No. 12 in the preseason AP Top 25. They were coming off an NIT championship and had the No. 1 recruiting class in the country led by Emoni Bates and Jalen Duren.

Regardless, the Tigers are here, ending the longest NCAA drought for the school since a five-year stretch from 1997 to 2002, and they're talented enough to be a threat to any opponent.

“I remember when I was in elementary school, the teacher just wheeling in the TV and turning the tube on and us watching the NCAA Tournament,” Hardaway said. “To be able to give that to the kids back home and to the city back home is a dream come true, to be honest, because I know how big it is when the Tigers are playing in the NCAA Tournament and how the city is all tuned in."

Getting to this point hasn’t been smooth for Hardaway, now in his fourth season at his alma mater.

Duren lived up to his billing, being named the American freshman of the year and looking the part of a future NBA lottery pick. But the Tigers started the season 9-8 and struggled through a three-game losing streak in January. Hardaway snapped at a reporter who questioned whether he was the right coach for the Tigers.

They found their footing, however, and closed the season winning 12 of 14, including a pair of regular season wins over Houston. The Cougars got the better of the Tigers in the American championship game, but Memphis rescued its NCAA hopes.

“I feel like the turning point was just getting closer off the court for us, becoming more of a brotherhood, learning each other’s stories a lot more,” Lomax said.

For Hardaway, this NCAA experience is far different than the one he had as a player. The Tigers reached the Elite Eight in 1992 during Hardaway’s sophomore season, knocking off Pepperdine, Arkansas and Georgia Tech before falling to Cincinnati.

A year later as a No. 4 seed, the Tigers were upset by Western Kentucky in the first round. As a player, it was easy — just go play. As a coach, it’s far more involved.

“That’s your job to get the team to the NCAA Tournament as a coach. As a player you’re just playing, fighting hard for every game, every win, and when you get there you’re like, ‘OK, let’s go out here and win as a team,’” Hardaway said. “As a coach you’re building your entire team around getting here.”

The Tigers' first-round opponent isn’t an easy one. Boise State (27-7) won the Mountain West regular season and tournament titles, and while the Broncos might lack the NBA prospects that Memphis has, they have an experienced group that’s played together for several seasons.

"There’s not much that a lot of us haven’t seen in college basketball,” Boise State’s Emmanuel Akot said. “I think just understanding that we can beat any team in the country, but they’re a very good team, too, so we just have to come ready to play.”