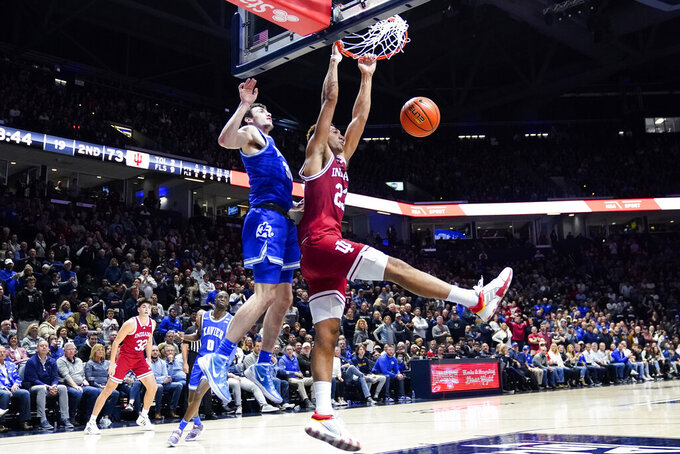 Indiana forward Trayce Jackson-Davis (23) dunks in front of Xavier forward Zach Freemantle (32) during the second half of an NCAA college basketball game Friday, Nov. 18, 2022, in Cincinnati. (AP Photo/Joshua A. Bickel)

The Hoosiers (3-0) led 78-70 with 2:25 left, but Xavier rallied within a point in the final minute. Adam Kunkel missed a potential go-ahead layup with 2 seconds left.

“I was concerned coming in,” Hoosiers coach Mike Woodson said. “(Xavier) is good. They're big, physical, they can hit shots. We made winning plays down the stretch.”

“There aren't many college basketball games this good before Thanksgiving,” Musketeers coach Sean Miller said. “I'm happy with our effort. It came down to the end. Our offense was certainly good enough to win. Our defense wasn't good enough.”

The Musketeers (3-1) got a boost from the return of Colby Jones, who missed one game and was limited in practice this week with a right ankle injury. He was cleared to play before warmups and had 13 points and six assists.

“This is a guy who didn’t do anything for seven days,” Miller said. “I really respect him for what he did for us in this game. He played 36 minutes. A lot of kids wouldn’t have done that.”

Playing their first road game of the season, the Hoosiers started 0-for-5 from 3-point range before making two straight. The Musketeers made four of their first seven shots from deep.

The inside duo of Nunge and Freemantle combined for 17 points and ten rebounds in the first half as the Musketeers led by as many as nine points before taking a 40-38 lead into halftime.

Jackson-Davis already had 17 points for Indiana at the break.

“I took the load tonight,” Jackson-Davis said. “That's what I want to do moving forward. We couldn't assume we were just going to put this game away. We knew they were going to fight. We have big expectations this season. This was a big test.”

Foul trouble became an issue for Xavier in the second half.

Boum picked up his fourth foul with 17:18 remaining and was rotated in and out with freshman Desmond Claude. Jones and Freemantle each had four fouls by the five-minute mark.

“A lot of our fouls were from not being set,” Miller said. “It changed the game.”

“There are a lot of lessons you can take from this game,” Miller said. “If Adam Kunkel hits that shot, it would be like a parade here. But we’d still have the same issues. We lost to a good basketball team.”

Both Malik Reneau and Johnson were whistled for technical fouls for taunting after made baskets.

Reneau had 12 points off the bench for Indiana.

“It's an emotional game,” he said.

Indiana: Any road win is big for the Hoosiers, who had lost nine straight nonconference games as visitors. IU went 3-8 on the road last season and is 15-40 in away games over the past five seasons. “It's hard to win on the road,” Woodson said. “You have to do a lot right. Back in the day, we used to win on the road. We held fast tonight.”

Xavier: The Musketeers still have work to do on defense. After allowing 70 points per game last season, they gave up 44 first-half points in an exhibition against Division II Kentucky Wesleyan. Xavier allowed 50 points in the paint on Friday. “Our defense wasn't good enough,” Miller said. “We couldn't handle Indiana in the paint.”

Indiana hosts Miami (Ohio) on Sunday in the Hoosier Classic.