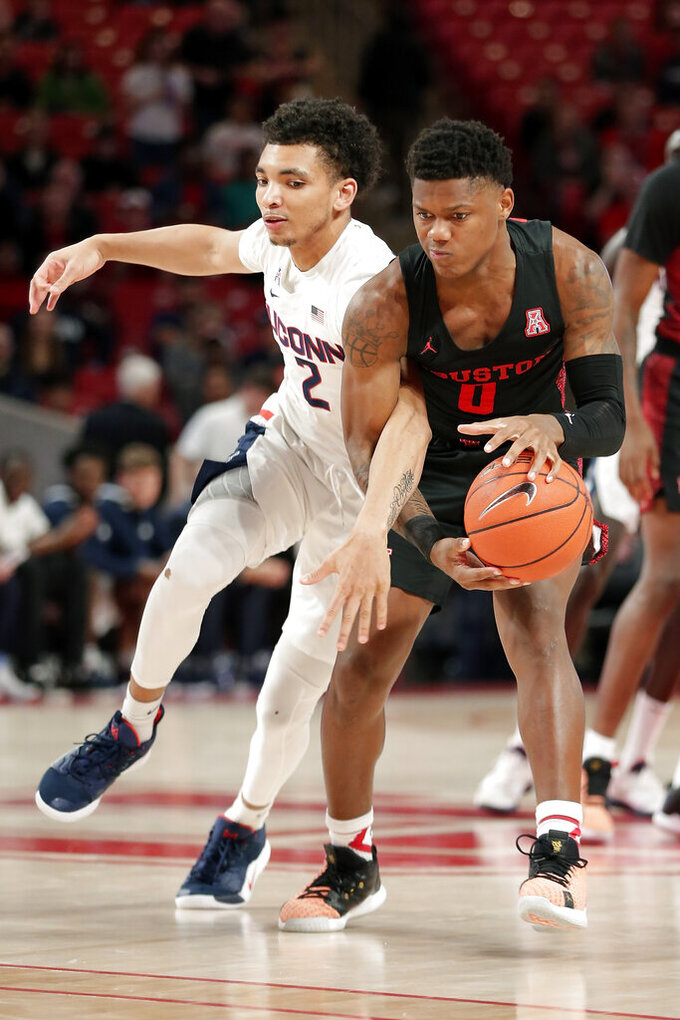 Connecticut guard James Bouknight (2) and Houston guard Marcus Sasser (0) tangle up as they battle for the ball on the tipoff during the first half of an NCAA college basketball game Thursday, Jan. 23, 2020, in Houston. (AP Photo/Michael Wyke) 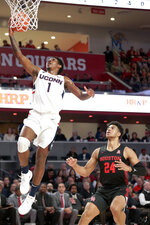 HOUSTON (AP) — Houston found a way to win, even without its best stuff.

“Sometimes when you don’t have your best stuff, and you’re in a fight like that, you have to find a way to win,” Houston coach Kelvin Sampson said. “That’s where your culture comes, where how you practice every day comes in. Your preparation.”

Jarreau and Mills combined for the final 19 points, including 12 free throws, as Houston overcame a six-point deficit in the final 5:15. The duo combined to score the last 28 points for Houston over the final 11:41.

“I wanted to make a shot, but I knew if I didn’t, we would get the rebound,” Mills said. “It wasn’t a lot of pressure on my side.”

Houston (15-4, 5-1 American Athletic Conference) won its third straight despite shooting 36% from the floor. Houston was 25 of 34 from the free throw line in a foul-filled game.

“You’re going to have games like this if you play 30-something games,” Sampson said. “We had a game like this early in the year against BYU and found a way to lose it. This one tonight, we found a way to win it.”

UConn coach Dan Hurley said it was a tough loss.

“We played so hard,” Hurley said. “We are developing an identity of grittiness and resilience and defensive mentality. A team toughness that right now is the one thing we can control.

“Offensively, we struggled at the foul line a little bit, costly late game turnovers where we just put ourselves in bad spots. Then a couple of those finishes at the rim late, they made extraordinary blocks on. They just made some great plays.”

Jalen Gaffney made a layup and two free throws after Jarreau was whistled for a technical, closing within 61-59 with seven seconds left. Temi Aiyegbusi missed a jumper with five seconds remaining, and Mills grabbed the rebound and sealed the win with two free throws with two seconds left.

“We were trying to get Temi into that opposite corner and just hope that they would take that fourth defender and occupy him, but they did a great job of using those four guys to take away the three guys we had in action,” Hurley said. “They’re smart. They didn’t play Temi and funneled the ball his way.”

UConn: The Huskies fell to 1-4 against ranked teams, including losses in their last three games.

Houston: The Cougars had their third-lowest scoring half of the season with 25 first-half points. Houston won the rebounding battle 42-33 and had just one second-chance point.

“You can’t get personal as easy as it is to react,” Sampson said of Jarreau’s technical foul. “We didn’t curse back, but he didn’t see the initiator, he saw the second guy. In defense of the refs, that’s a hard game for the referees, as is most of our games.”