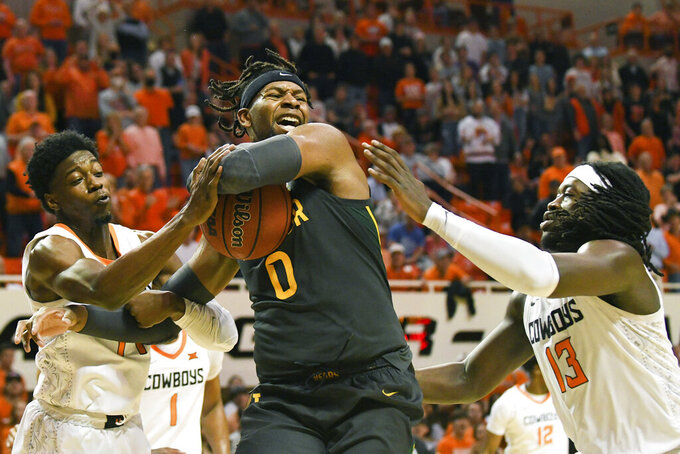 The Big 12's best team this season meets the league's best — and the nation's best, for that matter — from last season when No. 5 Kansas heads to No. 10 Baylor on Saturday night. The Jayhawks (23-4, 12-2) can essentially put away the Bears (23-5, 11-4) in the race for the regular-season title with a season sweep of the defending national champions.

Kansas has won four straight following a nip-and-tuck loss to Texas, while the Bears have won four of their past five since their loss in Lawrence with the only blemish against No. 11 Texas Tech.

“You know, every test is opportunity for us; we are getting better. We’ve progressed throughout the year,” Jayhawks forward Jalen Wilson said,. "We continue to get better, so I think there’s a whole lot of opportunity.”

Speaking of the Red Raiders (22-6, 11-4), they have a tough game against TCU on Saturday night as they try to keep their hopes alive of landing the No. 1 seed for the Big 12 Tournament. Texas Tech also has won four straight games, including wins over Baylor and No. 20 Texas, and none of its final three games are against a ranked opponent.

The Longhorns (20-8, 9-6) head to West Virginia on Saturday, while Iowa State tries to improve its NCAA tourney hopes at Kansas State, and Oklahoma State heads to Oklahoma for the latest edition of Bedlam.

Texas forward Andrew Jones was nothing if not consistent: He scored 20 points in a win over Oklahoma, 20 in a loss to Texas Tech, then exploded for ... 21 in a win over TCU. The 24-year-old sixth-year senior was held to just four points by the Red Raiders on Feb. 1, but he's averaging 16 points over the six games since that night. He also played 43 minutes while pulling down seven rebounds in that overtime win over the Sooners.

Texas Tech swept former coach Chris Beard and the Longhorns for the second straight year, improving to 9-2 in their last 11 games and winning its fourth straight in Austin. ... Kansas beat Kansas State for the seventh straight time in Allen Fieldhouse this week. ... Jayhawks guard Ochai Agbaji had 23 points against the Wildcats to move past Wilt Chamberlain and into 26th on the school's career list with 1,444 points. ... Oklahoma State's Bryce Thompson scored 15 of his career-best 23 points in the second half of an 82-79 win over Kansas State. ... The Wildcats' Nijel Pack has scored at least 10 points in 17 straight games and 23 of his first 24 this season. ... Texas has won seven straight against TCU. ... Iowa State guard Izaiah Brockington scored a career-high 35 points and had a critical steal and lay-up with 22 seconds left in an 84-81 win over West Virginia this week.

Fifth-ranked Baylor (22-5, 12-3) plays Kansas and No. 9 Iowa State (23-4, 12-3) plays Texas Tech on Saturday as the two teams compete for the No. 1 spot in the Big 12. ... Texas Tech’s Vivian Gray averaged 29 points, five rebounds and three assists last week. She is the only Division I player averaging at least 20 points, two assists, two steals and a block this season. ... TCU's Lauren Heard can break the Big 12 record for career games played with her 150th on Saturday against Texas. ... Baylor's Jordan Lewis can break the NCAA record for games played regardless of the school with her 158th against the Jayhawks. ... Iowa State's Ashley Joens became her school's career scoring leader last week. She is also the Big 12's active leader with 2,206 points. ... Kansas (19-6, 10-5) has won at least 10 league games for the first time since 2000. The Jayhawks have won seven of their past eight overall.