Krzyzewski: 'No knowledge' of alleged assault by ex-player 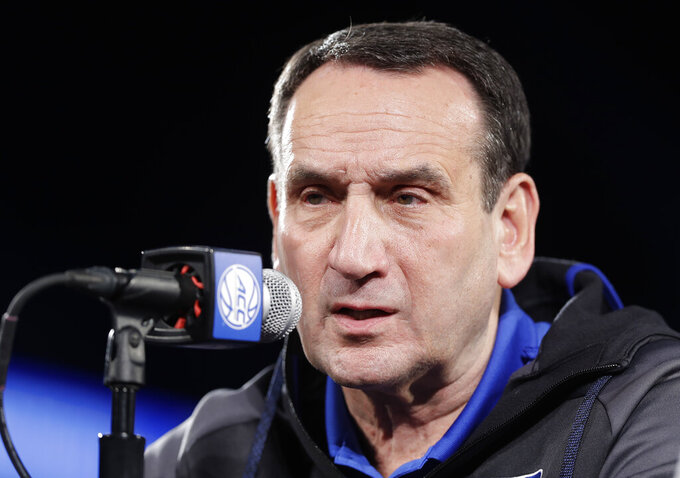 FILE - In this Oct. 24, 2018, file photo, Duke head coach Mike Krzyzewski speaks to the media during a news conference in Charlotte, N.C. Krzyzewski says he has "no knowledge" of a woman's allegation that she was sexually assaulted by a former Blue Devils basketball player and said he believes the school should and will investigate. (AP Photo/Chuck Burton, File) 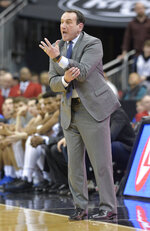 LOUISVILLE, Ky. (AP) — Duke coach Mike Krzyzewski says he has "no knowledge" of a woman's allegation that she was sexually assaulted by a former Blue Devils basketball player and he believes the school should and will investigate.

Lawyer Nancy Erika Smith has said her client, Meredith Watson, was raped by a basketball player while she was a student at Duke. The New York Times and other publications have identified the player as Corey Maggette, who has denied the allegation. The reports cited a friend of Watson, R. Stanton Jones, who said she told him about the alleged assault at the time.

Watson has also said Virginia Lt. Gov. Justin Fairfax sexually assaulted her while they were students at Duke in 2000. Smith said Watson told a high-ranking administrator about the assault by a basketball player but was dissuaded from filing a complaint or notifying police. Maggette played at Duke in the 1998-99 season and then left for the NBA.

Krzyzewski was asked about the allegation after Duke's 71-69 victory over Louisville on Tuesday night. He said he wasn't aware of the details.

"At that level for that serious an accusation, it's always university level. Our university, they'll handle everything and that's what should happen," Krzyzewski said.