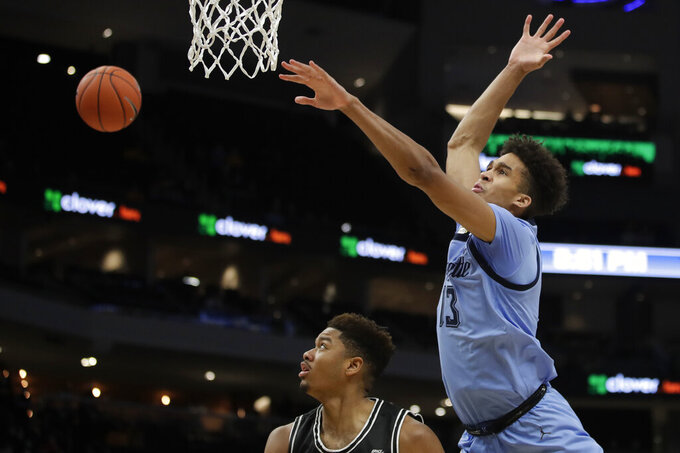 Marquette's Oso Ighodaro (13) loses control of the ball as he's fouled by Providence's Ed Croswell during the first half of an NCAA college basketball game Tuesday, Jan. 4, 2022, in Milwaukee. (AP Photo/Aaron Gash)

MILWAUKEE (AP) — Marquette emphatically ended its slump and produced the kind of decisive victory that could rejuvenate its hopes of competing in the Big East race.

Justin Lewis had a career-high 23 points and 11 rebounds as Marquette trounced No. 16 Providence 88-56 Tuesday night to snap the Friars’ eight-game winning streak.

The Golden Eagles (9-6, 1-3 Big East) broke out of their four-game skid by scoring 20 straight points late in the first half. Marquette poured it on from there and set a school record for margin of victory against a Top 25 team.

“It’s been a rough start in the conference for us, but it always starts with one win at a time,” said Marquette’s Kur Kuath, who had seven blocks to go along with nine points. “I feel like with this win, we’re finally getting our rhythm and motion and finally finding ourselves again.”

Marquette's lead never dropped below 20 throughout the second half. That represented a major reversal of fortune for the Golden Eagles, who faced double-digit deficits in the second half of each of their first three Big East games.

Providence (13-2, 3-1) didn’t have A.J. Reeves, who had played just nine minutes Saturday in a victory at DePaul and had his left pinky and ring finger taped together during that game. Reeves entered Tuesday ranked third on the team with 10.7 points per game.

The Friars fell for the first time since a 58-40 setback against Virginia on Nov. 23 at Newark, New Jersey.

“I don’t think you overreact,” said Providence’s Ed Cooley, who was seeking his 300th career head coaching victory. “You’ve got to give credit to Marquette. They played great. I was actually jealous of the way they played because that’s the way we’d been playing.”

Marquette bounced back from a 75-69 double-overtime home loss to Creighton in which the Golden Eagles allowed a buzzer-beating 3-pointer at the end of the first extra session.

“The last couple of days have been pretty tough from the standpoint of just trying to process that last game, but I thought our guys took an unbelievable approach,” Marquette coach Shaka Smart said. “Our guys understand that we have to lead with defense and we have to play and pull for one another, and there's no other way. When we understand that, then we can be really good.”

Oso Ighodaro had 16 points, Kam Jones 14 and Olivier Maxence-Prosper 11 for Marquette, which shot 52.5% from the floor. Al Durham scored 16 and Ed Croswell added 11 for Providence.

Marquette went on a 14-1 run early in the game to take a 20-6 lead. Providence outscored Marquette 12-2 over the next five minutes to get within four.

“We kind of started to lose our way a little bit in terms of where our minds needed to be,” Smart said. “A couple of guys got wrapped up in some calls, some plays that didn’t go our way. In the timeout, it was, ’Hey, let’s refocus on where we need to be, where we need to put out focus. Stops. Deflections. Helping each other. Multiple efforts. And then I thought our guys did that.”

Marquette responded to that 12-2 Providence run by getting the next 20 points. Jones scored six points during that stretch and provided the biggest highlight with a step-back move that left him with a wide-open 3-pointer.

Providence trailed by 24 before scoring the last four points of the half. The Friars went 7 minutes, 48 seconds without a basket before Brycen Goodine finally ended the drought with one second left in the half.

Providence: A lack of offense has cost the Friars in each of their losses. They shot 23.5% and made just 12 baskets against Virginia. Their inability to make baskets in the first half pretty much sealed their fate Tuesday. Providence shot 7 of 25 in the first half.

Marquette: This was a win the Golden Eagles desperately needed. They couldn't afford to dig themselves into an 0-4 hole in the Big East to have any realistic hope of reaching the NCAA Tournament.

This blowout figures to drop Providence at least to the 20s, though the Friars likely will stay in the poll next week if they don't suffer a second straight loss.

Marquette: At Georgetown on Friday.