Mask Up! Robinson-Earl shines with broken nose for Villanova 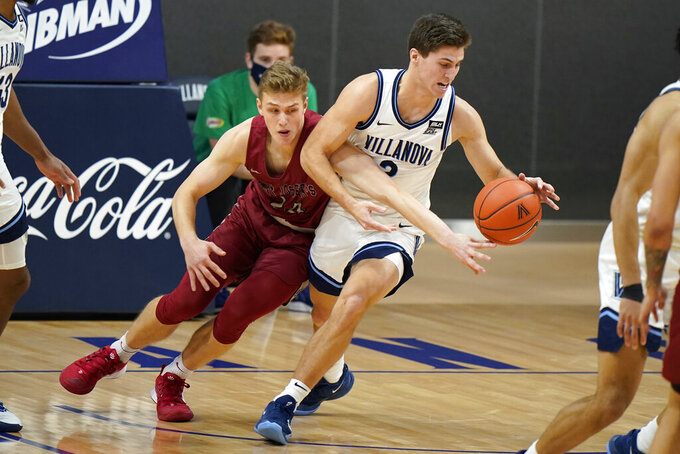 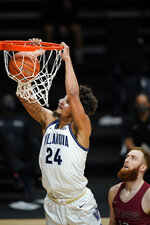 VILLANOVA, Pa. (AP) — Jeremiah Robinson-Earl got a fitting reminder from mom to pick up an accessory for his 2020 breakout game: Don’t forget your mask.

Robinson-Earl suffered a broken nose a game earlier for Villanova and didn’t need the team’s medical staff to fit him for his protective shield. His mom lives in the area and dropped off the same mask Robinson-Earl wore for games when he broke his nose in the eighth grade.

“She went right into the closet,” Robinson-Earl said with a laugh.

Robinson-Earl scored 25 points with a broken nose, Caleb Daniels had 19 points and No. 7 Villanova beat Saint Joseph’s 88-68 in a hastily-scheduled game Saturday night.

He took an elbow to the face in Wednesday’s win against Butler and played with cotton stuffed inside his nose to get through the game. Mom pitched in, and Robinson-Earl was in good shape to rough up the Hawks.

“I was so concentrated on the task at hand that it doesn’t really bother you as much as it looked,” he said.

It looked bad for the winless Hawks.

The 6-foot-9 forward had tested the NBA waters before deciding to return for a sophomore season at Villanova (7-1). He showed flashes of a stout all-around game with baskets from the baseline, right wing, left wing, and need only two 3s as he piled up the points. Robinson-Earl helped the Wildcats turn this one into a rout in the second half with 8-of-14 shooting overall, and he made seven of Villanova’s 15 free throws, added eight rebounds and never seemed bothered by his injury.

“He played fearless so I wasn’t worried about a mask,” coach Jay Wright said.

The Wildcats have been able to avoid the COVID-19 bug once the regular season started and even added games to the schedule when others dropped off.

This mismatch was a late addition for both teams after Villanova’s scheduled game against Virginia at Madison Square Garden was scratched this week. The Wildcats vs. Cavaliers was one of the more anticipated games on the college basketball schedule: Villanova, the 2016 and 2018 national champions against the 2019 champs Virginia. But Virginia paused activity because of COVID-19 issues within its program and the game will not be rescheduled.

With the holidays on the horizon, Wright even got St. John’s to postpone a Big East matchup scheduled for Dec. 30.

“We were going to play if St. John’s wanted to play. They said no,” Wright said.

The Hawks only wish they had that option.

Saint Joseph’s (0-4) made it a game for a while and trailed by eight at halftime, the latest team to force somewhat of a competitive score against the Wildcats until they pulled away

Villanova got a 3-pointer from Robinson-Earl and Justin Moore’s fastbreak dunk off a turnover made it 58-43. Daniels, fitting right in after transferring from Tulsa, buried a 3 for a 25-point lead, and there was no slowing down the Wildcats.

Saint Joseph’s-Villanova is usually the must-watch game on the Philadelphia hoops scene, even as the Wildcats have become the class of the city and lead the series 52-25. The scheduled matchup was delayed 20 days because Saint Joseph’s had its own COVD-19 issues.

Spot the Hawks and coach Billy Lange another 20 days and they still wouldn’t have had a chance against Villanova.

Lange noted there were “moments of immaturity” that doomed the Hawks.

The Hawks looked worn down, and star guard Ryan Daly, who averaged 20.7 points, was held to just 11 and failed to hit a 3-pointer in his stiffest test of the season. Taylor Funk and Jordan Hall each scored 17 points for the Hawks.

Saint Joseph’s plays No. 10 Tennessee on Monday to complete its first set of back-to-back games against top-10 teams since 2006 when it lost to No. 4 Villanova and No. 8 George Washington. Saint Joseph’s last win at Villanova came on Feb 2, 2004 and the Hawks are now 2-14 in games played at Villanova.

The Wildcats keep rolling and gave Wright his 601st career victory. The Wildcats are now 311-63 lifetime in the Pavilion.

Villanova invited family members to meet with the team at a socially-distanced gathering at the Pavilion during the holiday hiatus.

“I think it’s good to get a little break from basketball,” Moore said.

Saint Joseph’s continues its rugged schedule Monday with a game at No. 10 Tennessee.