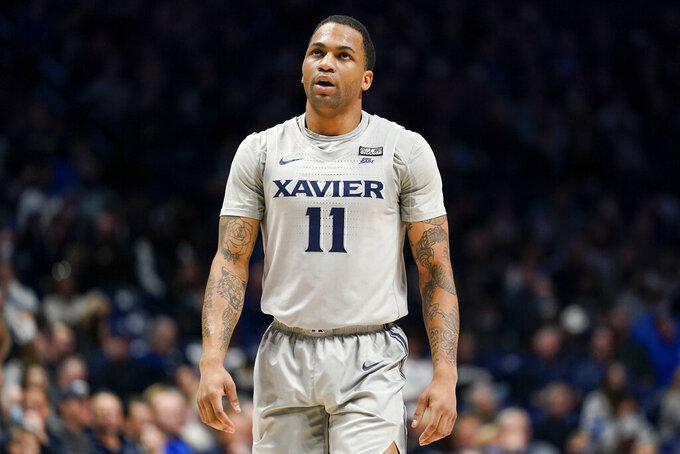 Xavier guard Dwon Odom (11) reacts after missing a shot during the first half of an NCAA college basketball game against DePaul, Saturday, Feb. 5, 2022, in Cincinnati. (AP Photo/Jeff Dean)

“We had some adversity in that game. The guys we have are pretty resilient," DePaul coach Tony Stubblefield said. “I'm proud of our group.”

Paul Scruggs led the Musketeers (16-6, 6-5) with 21 points. Jack Nunge made his fourth straight start after coming off the bench in 17 of the first 18 games and scored 12 points.

Colby Jones had 11 points for the Musketeers, who lost to a DePaul team that has won just twice in 11 games.

“I wanted them to be mad," Xavier head coach Travis Steele said of his message to his players. "We have to learn from our mistakes. That's what good teams do, what mature teams do. There’s a lot of season left. I have belief in that locker room over there.”

The Musketeers trailed 34-27 at halftime and did not have a field goal for the first 5:37 of the game, falling behind by as many as 13 points in the opening half.

Zach Freemantle's jumper gave the Musketeers their first lead of the game with 15:47 remaining. Fremantle finished with 10 points.

“We knew Xavier was going to make a run,” Stubblefield said. “But our guys hung in there.”

The Blue Demons trailed by five before going on a 13-0 run to regain control. McCauley's 3-pointer gave them a 49-41 lead.

“Their size and athleticism around the rim caused some problems,” Steele said. "We need to execute better. We need to work for good shots for Xavier, not for individuals.”

The Musketeers got within two points on a pair of free throws by Scruggs with 30 seconds left.

The Blue Demons went 8 of 9 from the free throw line, including two each from Ongenda and Brandon Johnson in the final seconds to help seal the victory.

“We have some injuries, (but) we came here with the group that we had. And there were no excuses. Nobody in this league is going to feel sorry for you.” Stubblefield said.

The Musketeers have led at halftime just once in the past eight games, but they've managed to win four of them. A week ago, Xavier trailed by 17 at halftime at Creighton, then won by 10. But that's no way to live in the Big East Conference. “You can’t win in this league playing 20 minutes of good offense,” Steele said. “We have to continue to figure it out. I don’t know if it’s changing the starting lineup again.”

DePaul: Leading scorer Javon Freeman-Liberty missed his fifth straight game with a groin injury and Javon Johnson was out with a hand injury, leaving the Blue Demons with seven scholarship players for Saturday's game.

Xavier: Saturday's loss was the Musketeers' first this season against an unranked opponent. But losing to an undermanned DePaul team at home is the first real blemish on the Musketeers' NCAA Tournament resume which includes a win over Ohio State. “All losses count the same,” Steele said.