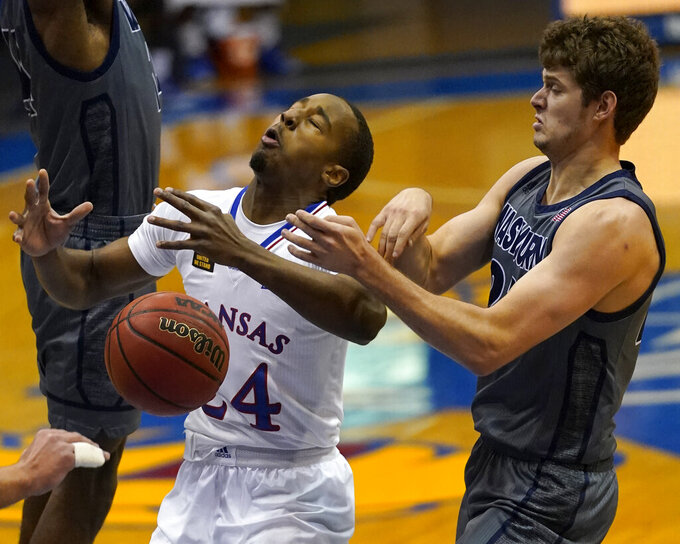 Kansas guard Bryce Thompson (24) is fouled by Washburn forward Will McKee, right, during the first half of an NCAA college basketball game in Lawrence, Kan., Thursday, Dec. 3, 2020. (AP Photo/Orlin Wagner) 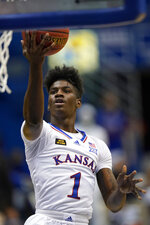 LAWRENCE, Kan. (AP) — Bryce Thompson remembers watching the annual “Late Night” festivities that kick off every basketball season at Kansas, and how the students and fans packed Allen Fieldhouse to the rafters to watch a glorified practice.

He never anticipated his first game in the Phog would be played with a couple hundred people in the stands.

The talented freshman must have found some energy on his own, though. Thompson scored 11 points to complement big nights from David McCormack, Ochai Agbaji and Jalen Wilson, helping the seventh-ranked Jayhawks cruise to an 89-54 victory over lower-division Washburn on Thursday night in their long-awaited home opener.

“It was definitely different. Not what I was used to,” Thompson said. “I came to ‘Late Night’ and saw all the fans, and it was a little different. But I just had to get used to it, catch a rhythm and build some energy from my teammates.”

McCormack scored 17 points, Agbaji added 16 points and Wilson had 12 as the Jayhawks shot 52.5% from the field.

Kansas (3-1) had opened with a pair of games in Florida and beat Kentucky in Indianapolis before returning to the friendly Phog. But their first game played in the old barn since the COVID-19 pandemic started lacked much of the atmosphere that has made the building one of the toughest — and most hallowed — in all of college basketball.

Players sat apart from each other, like they have at other venues, and the recent surge in positive cases forced school officials to limit attendance to a couple hundred staff and family members. Even the pregame montage on the video boards and the haunting chants of “Rock Chalk” that so often disquiet opponents were somewhat muted.

“I don't know if you can say it doesn't feel weird,” McCormack said. “We've definitely accommodated to it, but playing a game your whole life and having fans cheering you to not having them at all, or lessened — it's going to feel weird.”

Jayhawks coach Bill Self was a little more succinct.

“I thought that it was not great, by any stretch,” he said. “But the atmosphere here was 10 times better than what it was in Indy. In Indy, there was none at all. At least we had some cutouts and a few people in here. But it's not the same.”

The practice-like atmosphere might be why Washburn (3-1), coached by former Jayhawks guard and Self assistant Brett Ballard, wasn't rattled in the first half. Levi Braun hit a trio of early 3-points, Jonny Clausing bulled his way to a couple easy baskets, and the Ichabods managed to hang within 27-22 at the under-8 timeout of the first half.

McCormack and Wilson began to be too much, though.

McCormack, a junior forward, was 5 of 6 from the field on his way to 13 first-half points, and Wilson drilled three 3s and had 12 points as Kansas used a late run to stretch its lead to 49-32 heading into the locker room.

Both teams were sloppy to start the second half, each errant pass resulting in coaching from the sideline that seemed to echo off the walls. But the Jayhawks eventually began to pull away with Agbaji starting a big run that pushed the lead to 61-34, allowing Self's bunch to cruise to their 48th consecutive home-opening win.

“I think there's some positives from this. I thought we scrapped and competed in spurts," Ballard said. “As a whole, I wasn't overly satisfied. I thought we could play a little tougher and our compete wasn't where I'd like it.”

Kansas announced before tipoff that fans would return in limited amounts Tuesday night against No. 9 Creighton, continuing through games against Omaha on Dec. 11 and Tarleton State two days later. At that point, a decision will be made on the next batch of home games. “This remains a very fluid situation that changes daily with the rise and fall of COVID-19 infection rates," Jayhawks athletic director Jeff Long said in a statement.

Washburn hung around as long as it hit open 3-pointers, and exceptional ball movement for the Division II powerhouse meant there were plenty of them. The Ichabods finished 9 of 26 from beyond the arc.

Kansas, which prefers to run its offense through its post players, tried to get McCormack involved early. He had averaged just 7.7 points and 4.7 rebounds in wins over Saint Joseph's and Kentucky and a season-opening loss to No. 1 Gonzaga.

Washburn returns to the MIAA play against Newman on Saturday. The Jayhawks play North Dakota State that afternoon.