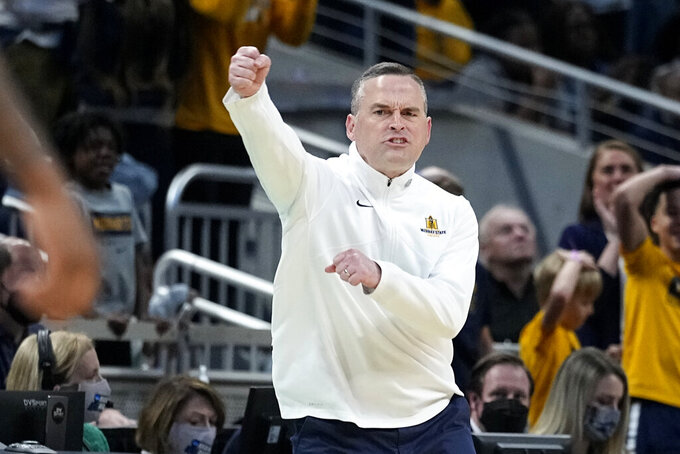 Murray State head coach Matt McMahon reacts during the second half of a college basketball game against San Francisco in the first round of the NCAA tournament, Thursday, March 17, 2022, in Indianapolis. (AP Photo/Darron Cummings)

BATON ROUGE, La. (AP) — New LSU coach Matt McMahon brushed aside the specter of possible NCAA sanctions for the program he agreed to take over this week, or how they might affect his ability to build on his already formidable career coaching record.

“I couldn’t tell you anything about my career record. That’s not why I coach,” McMahon asserted at his formal introduction at LSU on Wednesday. “I coach to make an impact on people ... to be of service to young people. That’s what I’m going to continue to do, and we’ll do a lot of winning along the way.”

McMahon, who went 154-67 during the previous seven seasons at Murray State, said his appreciation for LSU's basketball history and the university's overall high profile in major college sports made the offer to coach the Tigers a “once-in-a-lifetime opportunity for me.”

McMahon, 43, fills the vacancy created by the March 12 firing of Will Wade, who led LSU to the past three NCAA Tournaments, but who is facing allegations of major recruiting violations. Depending on the results of an ongoing NCAA investigation, LSU ultimately could face punishments such as scholarship reductions or even a temporary postseason ban.

That could by why athletic director Scott Woodward and LSU President William F. Tate seized the chance to hire a relatively young, up-and-coming coach from a mid-major conference rather than luring a top, power conference coach to Baton Rouge, as they did with the hiring of football coach Brian Kelly from Notre Dame, women's basketball coach Kim Mulkey from Baylor and baseball coach Jay Johnson from Arizona.

Tate called McMahon a “transformative talent,” noting how he was able to recruit a player such as Ja Morant to Murray State, an Ohio Valley Conference school in Murray, Kentucky, and help prepare them for NBA stardom.

Woodward, who'd previously lamented an “exhausting shroud of negativity” hanging over LSU basketball during Wade's tenure, said he and Tate were set on hiring “a man of character who shared our vision and our values as an institution.”

This season, Murray State went 31-3 and the won its fourth regular-season conference title in five years. It was a No. 7 seed in the East Region in this year’s NCAA Tournament and defeated 10th-seeded San Francisco in overtime in the first round.

Murray State has appeared in three of the past four NCAA Tournaments, in 2018, 2019 and 2022. There was no NCAA Tournament in 2020 because of the coronavirus pandemic.

The Racers also won a first-round game in 2019.

Now McMahon takes over an LSU team that went 22-12 this season, capped by a 59-54 first-round NCAA Tournament loss to Iowa State.

McMahon said he has spoken with some players individually since his hiring but planned to have a full team meeting soon.

“I want people who want to be here,” McMahon said. “We’re going to do things the right way, and we’re going to make sure we’re developing young men, not only on the court.

“I know everyone wants to play in the NBA,” McMahon continued. "But the average career is three-and-a-half years, so it’s going to be an all-encompassing program.”

McMahon also said his scheme is an up-tempo one which “enables elite players to come here and develop into NBA players.”

“I always laugh,” McMahon continued. “Sometimes, people say they want to be a pro and then they’ll go to a school where they walk the ball up the court and try to win games 48-46. That’s not very conducive to the NBA.”

McMahon grew up in Tennessee and played college basketball at Appalachian State. His wife, Mary, played in college for Furman. His two daughters, ages 13 and 9, and 11-year-old son are youth basketball players.

McMahon said he has admired LSU's basketball tradition from afar since his youth and saw them play in person as a child when Mahmoud Abdul-Rauf, then known as Chris Jackson, starred for the Tigers — and scored 49 points — in a victory over Tennessee in Knoxville.

McMahon said he used to have an Abdul-Rauf Denver Nuggets jersey. He also made references to Pete Maravich, the late Hall of Fame player for whom LSU's basketball arena is named, as well as former LSU and NBA star Shaquille O'Neal.

“Every young man who gets here has worked their entire life to have the opportunity to play at LSU, to put on that jersey, to play in Pete Maravich’s house, to walk past Shaq’s statue going into the arena,” McMahon said. “This is an unbelievable place. Why wouldn’t you enjoy it?”