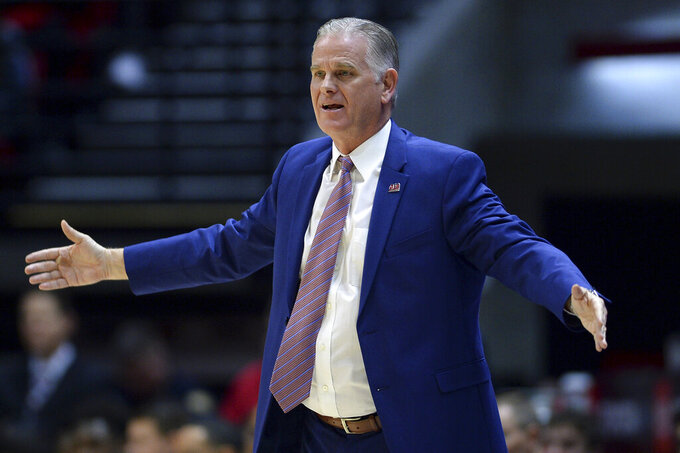 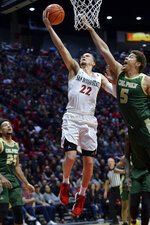 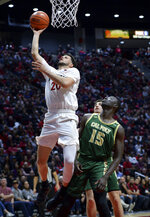 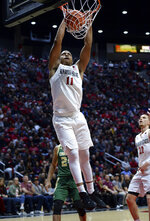 SAN DIEGO (AP) — San Diego State didn't look anything like the nation's 15th-ranked team for a long stretch of the first half against scrappy Cal Poly.

And then the stunner: The Mustangs raced back from a 10-point deficit to take a 23-22 lead to hush the crowd at Viejas Arena.

That's when SDSU finally woke up. Wetzell started a 9-0 run that closed the first half and the Aztecs won 73-57 to continue their best start in nine seasons.

Malachi Flynn scored 14 points and Wetzell and Jordan Schakel added 12 points apiece for the Aztecs (13-0), who are one of three undefeated teams nationally.

“We played a bit lackadaisical," said Wetzell, a graduate transfer from Vanderbilt. “It was a close game with about two minutes to go in the half and then we realized we've really got to step it up a little bit. The energy picked up, the hustle picked up and we went into the half up seven or eight. We had a good halftime chat and came out firing in the second half."

SDSU remains on its hottest start since 2010-11, when it opened 20-0 behind Kawhi Leonard and reached the Sweet 16 for the first time before finishing 34-3. SDSU, Auburn and Liberty are the nation's only undefeated teams.

After leading just 31-23 at halftime, SDSU opened it up early in the first half. Flynn hit two long 3-pointers, including one that banked in, and Feagin also hit a shot from behind the arc. Wetzell, a New Zealander, made three close-in shots to help the Aztecs take a 50-31 lead.

Kyle Colvin scored 13 points and Junior Ballard had 12 for the Mustangs. Alimamy Koroma had 12 rebounds.

The Aztecs frittered away an early 18-8 lead and let the Mustangs go ahead 23-22 on Koroma’s two free throws with 2:41 before halftime. The Mustangs also got 3-pointers by Colvin and Ballard in surprising the Aztecs.

SDSU turned it on in the final 1:40 to take a 31-23 halftime lead. After Matt Mitchell missed a 3-pointer, Koroma rebounded but Wetzell stole the ball and scored. Flynn and Schakel had layups before Mitchell followed Flynn’s missed 3 with a slam dunk, was fouled and made the free throw.

Schakel said Wetzell's steal and basket “gave us a lot of energy. I heard the crowd get back into it. I think Yanni's play was the play for us that really got us going."

SDSU shot just 40 percent in the first half.

“I thought our energy was good, we just couldn't make a shot," coach Brian Dutcher said. “We had some open looks. We shared the ball, and when the ball's not going in all of a sudden it becomes a challenge. Cal Poly played physical. They played a very good first half, had a lead late in the first half and then we made some energy plays. We went on enough runs to build a comfortable lead in the second half and come out with a victory."

Despite the early struggles, Dutcher likes where the Aztecs are.

“I told them our goal was to have an undefeated December," he said. “We did that. So we've got to take great pleasure in that. We're going into the new year as one of two or three undefeated teams left in the country. It can't be all doom and gloom after a game where we don't play great basketball. We played good basketball but not great basketball."

“I thought we got a little bit better, but we have to still understand the importance of taking care of the ball — 23 turnovers," Cal Poly coach John Smith said. “I know they’re a great defensive team, but some of those were unforced. Trying to finish halves stronger; in the first half, we let them go on a 9-0 run and those types of things kill you and kill your momentum. We have to learn how to finish halves better.”

Smith said the Mustangs followed the game and did what they could “to take away their strengths and we did it for about 18 minutes and then it fell apart.”

He called it “an opportunity for us to showcase ourselves and just play basketball. That’s what I talked about to the guys when we got down here. Nine-hour drive; be grateful we have a chance to play the No. 15-ranked team in front of a great crowd and have a chance to shut them up. That’s what it’s all about. Have fun with, learn from it.”

Cal Poly: The Mustangs have lost to two ranked teams this season after not facing a Top 25 team for four years. They lost 79-48 at then-No. 18 Saint Mary’s on Nov. 17. Saint Mary’s has since fallen out of the rankings.

SDSU: The Aztecs completed an undefeated non-conference schedule (11-0) for just the second time in the last 89 seasons. The highlights were wins at BYU, against Creighton and Iowa in a tournament in Las Vegas and against Utah at Staples Center in Los Angeles, which will boost the Aztecs’ resume for an at-large NCAA Tournament berth in case they don’t win the conference tournament and its automatic bid.

SDSU returns to Mountain West action when it hosts Fresno State on Wednesday. SDSU is 2-0 in the MWC, which started play this month because the conference tournament is a week earlier than normal.