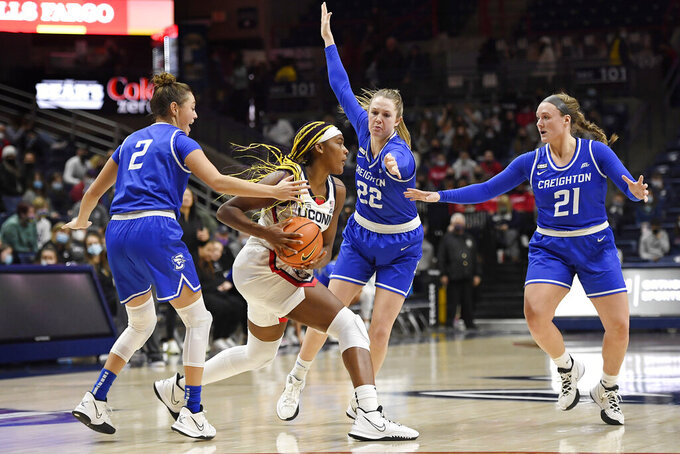 CINCINNATI (AP) — Colby Jones scored 14 of his 16 points in the second half as No. 17 Xavier rallied to defeat Creighton 80-73 on Saturday.

Xavier (13-3, 3-2 Big East) had six players in double figures scoring, helping the Musketeers bounce back from a tough loss on Wednesday to No. 14 Villanova with another big second-half comeback.

“That was an absolute grinder,” Xavier coach Travis Steele said. “I tell our guys every game in this league is going to be a war. I thought we had a great response after Villanova.”

Zach Freemante, who Steele challenged following the loss to Villanova, recorded his first double-double of the season with 13 points and 11 boards. He iced the game with a dunk in the closing seconds.

Freemantle missed the first six games with an ankle injury and is just now regaining his form.

"Tonight was that all-league level Zach (Freemantle) that we've grown accustomed to," Steele said. “I told him to focus on two things — attitude and effort. He was flying around the court.”

Paul Scruggs scored all of his 13 points in the second half and Jerome Hunter finished with 10, including a coupe of big 3-pointers during Xavier's second-half rally.

“Obviously, a disappointing loss,” Creighton coach Greg McDermott said. “I thought we did some really good things against a very talented and experienced team. They don’t get shook. They took advantage of some of our younger guys.”

An early 11-0 run helped Creighton take control, and 7-foot-1 center Ryan Kalkbrenner was disruptive at the rim throughout with eight points and five blocks.

“Kalkbrenner changed the game on that end,” Steele said. “Our guys got tentative. We opened up some driving lanes for Colby and Paul in the second half.”

O'Connell scored 10 points in the first half to help Creighton take a 34-29 lead into halftime.

The Bluejays had 13 turnovers in the first half, but the Musketeers didn't begin to take advantage until the second half.

“The turnovers were a huge factor,” McDermott said. “I thought we had several trying to feed it to the post. We had a couple against their pressure. If there was a type of turnover, we pretty much had it.”

Xavier trailed by eight points early in the second half before rallying behind Scruggs and Jones to take a 50-49 lead with 10:16 remaining. The Musketeers led by as many as 10 points in the half.

“I saw a few gaps in their defense. I always try to have that aggressive mindset,” Jones said. “We struggled with offense early, but it didn’t change things on the defensive end. That really changed the game for us.”

For the second straight game, Xavier got off to a cold-shooting start and had to rally in the second half. In Wednesday’s 64-60 loss to Villanova, the Musketeers trailed by 11 at halftime before roaring back to tie the score with 2 minutes left. “We listen to our leaders, like Paul Scruggs,” said Xavier forward Jack Nunge of the halftime speeches the past two games. “But everybody in the locker room was talking. We just wanted to be unflappable. We had a slow start, but we came out after halftime ready to win the game.”

Creighton: The Bluejays played for the first time since Jan. 5 and have played only three times since Dec. 17 after COVID-19 issues in opponents' programs forced three postponements. Two of the games (Georgetown Feb. 14 and at DePaul Feb. 17) have been rescheduled. The Jan. 11 postponement against Providence is pending a new date.

Xavier: Balance and depth have carried the Musketeers this season. Xavier has had nine different starters and seven different leading scorers. Four Xavier players are averaging in double figures in scoring.

Xavier begins a two-game road swing at DePaul on Wednesday.