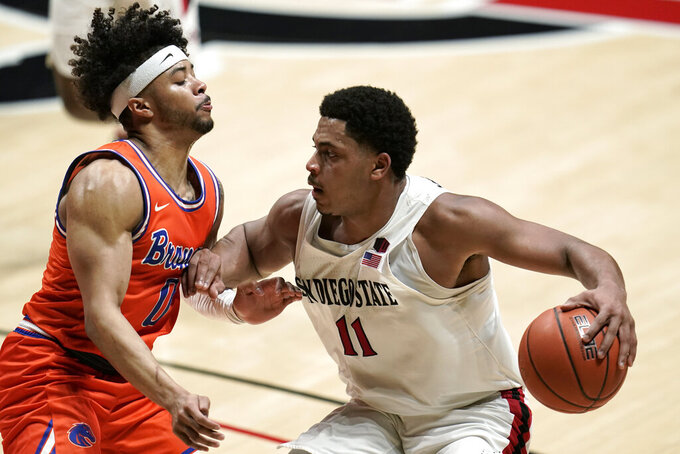 SAN DIEGO (AP) — Six weeks ago, San Diego State was 3-3 in the Mountain West and mired halfway down the standings.

On Wednesday night, Matt Mitchell, Jordan Schakel and the No. 19 Aztecs will play for their 11th straight win and their second straight regular-season conference title when they visit UNLV. It is one of several games the MWC rescheduled to make up for some conference games missed earlier in the season.

As much as coach Brian Dutcher wants to hang another banner in Viejas Arena and get the No. 1 seed for the conference tournament next week, also in Las Vegas, he’s looking ahead to the NCAA Tournament.

At 19-4 overall and with its NCAA Net Ranking at a season-high No. 17, SDSU appears to have done enough to get an at-large berth in the NCAA Tournament if it doesn’t win the conference tourney and secure the MWC’s automatic bid.

More than anything, Dutcher wants his Aztecs to continue to rigorously follow COVID-19 protocols.

“We’re doing a lot from that standpoint,” Dutcher said. “We are going to distance even more than we have, because we know in two weeks, Selection Sunday is here so at this point we’re going to do everything in our power not to risk a pause because the big picture is the NCAA Tournament. We want to do everything we’re capable of doing to keep these kids safe, healthy and ready for the NCAA Tournament.”

Even before the rescheduled game was announced, Dutcher was mindful of being extra careful. SDSU went 30-2 last year and was expecting a No. 2 seed before the NCAA Tournament was canceled due to the coronavirus pandemic.

“I’m not naïve enough to think it couldn’t happen to anybody, anywhere, any time. So, anything we can do to lessen our chances of contracting it is a benefit not only to us but our university.”

At the same time the MWC announced the rescheduled games, it also awarded SDSU a pair of forfeit victories over New Mexico for a series that wasn’t played because the Lobos had injuries but no COVID-19 cases. Those forfeit victories don’t count in SDSU’s overall or formal conference record, but will count for seeding and conference championship implications.

That’s what allowed the Aztecs (13-3 MWC) to control their own destiny, which they did by beating Boise State twice at home last weekend, including in overtime in the opener.

Now they need to beat UNLV (11-12, 8-8). A year ago, SDSU clinched the regular-season title with four games to go and raised the banner into the rafters at Viejas Arena before hosting UNLV. The Runnin’ Rebels won 66-63 to ruin the Aztecs’ perfect season. SDSU’s only other loss last season was to Utah State in the conference tournament championship game.

“I want to win a title,” Dutcher said. “I didn’t have anything to do with any of those decisions, whether those were forfeited, postponed; that happened at a level beyond what I work at. All I’m trying to do is win basketball games. ... I’m controlling what I can control and that’s to get my team ready to play.”

The Aztecs fattened up by sweeping series against four teams in the bottom of the standings before sweeping the Broncos, who came in with a one-half game lead.

“I think momentum’s really important, obviously,” Dutcher said. “If you feel good about yourselves, you’re going to play better. The more you win, the better you feel about yourselves. That being said, we don’t want to lose sight of our shortcomings. We work on those. But I want a team that plays with great swagger and believes in themselves, and winning has a lot to do with that.”

Schakel said the Aztecs have essentially been playing must-win games since they were swept in two games at Utah State in mid-January.

“We had to be aggressive on offense, our mindset more than anything, attacking downhill,” said Schakel, who averages 14.3 points, right behind fellow senior Mitchell at 15.2 points. “A lot of these games have been close, including both the Boise State games. I think that speaks volumes to how far we’ve come.”