No. 23 Illini look to new faces for deeper postseason run 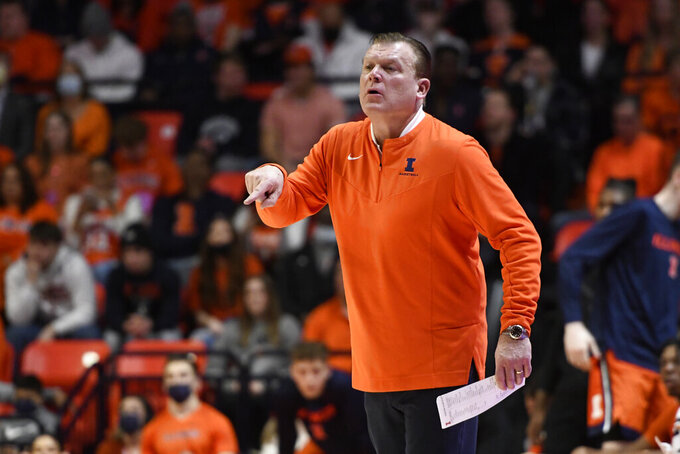 FILE - Illinois coach Brad Underwood gestures during the first half of the team's NCAA college basketball game against Ohio State on Thursday, Feb. 24, 2022, in Champaign, Ill. Underwood has added transfers and freshmen who could make the Illini very dangerous the second half of the season. (AP Photo/Michael Allio, File)

CHAMPAIGN, Ill. (AP) — Illinois coach Brad Underwood believes a new crop of talent can help his team stay near the top of the Big Ten.

“I woke up every night last year knowing I had 20 (points) and 10 (rebounds)," Underwood said. “That’s a pretty good feeling."

Forward Coleman Hawkins returns a sliver of the Illini's overall production after averaging 5.9 points and 4.3 rebounds per game. But Illinois must replace six of its top seven scorers and there are question marks for a program that has risen to the top of the Big Ten in recent years.

The Illini were big winners in the offseason transfer market, though, securing the talents of former Texas Tech wing Terrence Shannon Jr. and Baylor forward Matthew Mayer. Now it's a matter of working together.

The Chicago product is a proven scorer who could also share ball handling duties with a quartet of four-star freshmen guards in Skyy Clark, Ty Rodgers, Jayden Epps and Sencire Harris.

Mayer joins former Baylor teammate and forward Dain Dainja — who sat out last year after transferring in January — after winning a national championship at Baylor in 2021 and averaging a career-best 9.8 points and five rebounds per game last season.

Underwood has measured confidence in his team's many newcomers.

“I love our personnel,” Underwood said. “I think we’re as talented as we have been, it just looks different. We’ve got position-less size. I think that’s one of the things I enjoy, it’s about taking advantage of mismatches.”

He has compiled a 94-66 record in five seasons in Champaign, but sustaining success with a new-look group is an entirely different challenge amid high expectations.

Look for the Illini to resort to more intense, switch-heavy defensive looks Underwood deployed before Cockburn arrived to anchor the middle.

“We’re still young and getting a fresh start, too,” Hawkins said. “I haven’t been part of a team that switches (defensively) so much. I think we’re better because it’s easier to switch. I think the biggest thing to work on is our communication in those switches.”

On offense, Shannon and Hawkins will be expected to be double-figure scorers. Underwood will have to rely on some of his younger talents to emerge at that end.

“We’ve got guys who can break you down off the dribble,” Underwood said. "I think we can be a very good shooting team. So we’ll have to figure all of that out. Instead of just lining up and throwing the ball to Kofi, there will have to be some different options.”

Big Ten media members predicted the Illini to finish second behind No. 13 Indiana in a Big Ten that feels deep, but seemingly lacks national title contenders.

“It's unbelievable how hard every venue is to play (in), how good the coaching is, how good the players are,” Underwood said. “The league is obviously a little bit different. We lost great players (to the pros).”

Shannon, Hawkins and Mayer are used to the attention and scrutiny that accompanies playing for a prominent college basketball program.

"The hype that we get, that’s extra,” Shannon said. “We don’t really pay much attention to it. We just try to push each other hard every day.”

But how the young players — with seven underclassmen on scholarships — handle the hype will be a key factor in just how good the Illini can be.

Underwood pointed to $40 million renovations of the Ubben Basketball Complex as evidence of his program’s ascendency, though he noted that “you’ve got to go out and prove it in this league” to stay at the top.

Fans have flocked back to Champaign during the program’s resurgence, but are yearning for a deep NCAA tournament run after back-to-back exits in the Round of 32.

“We’ve come a long way,” Underwood said. “And you know, that doesn’t just happen because I’m sitting here. I’m the last reason, to be honest. It’s great synergy when you’ve got an athletic director giving you new facilities, we’re moving into a new practice facility and we can sell winning now.”

After the season opener against Eastern Illinois on Nov. 7, the schedule includes matchups against No. 8 UCLA on Nov. 18 and No. 5 Baylor or No. 18 Virginia on Nov. 20. Syracuse (Nov. 29) and No. 12 Texas (Dec. 6) are also scheduled to visit the State Farm Center before Big Ten play begins.