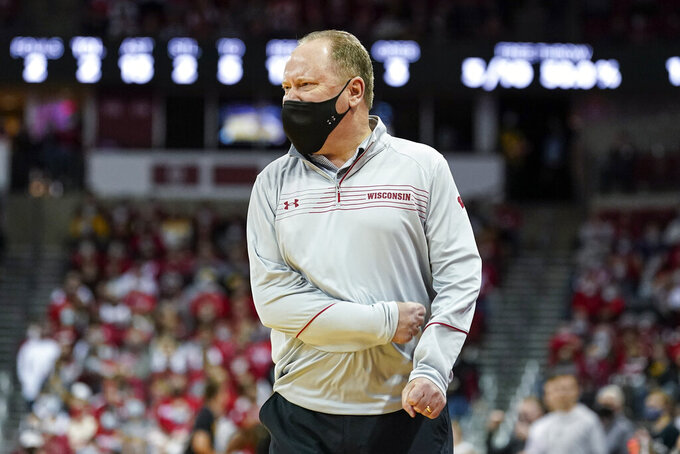 MADISON, Wis. (AP) — The matchup between two of the nation’s top scorers was a virtual draw.

In every other respect, No. 23 Wisconsin beat Iowa convincingly.

“I don't really care about that right now,” Davis said. “He's averaging more than me, but they lost.”

Wisconsin (12-2, 3-1 Big Ten) seized control of the game with a 12-0 spurt midway through the first half that included seven points from Davis. Iowa (11-4, 1-3) answered with eight straight points of its own to get within five, but Wisconsin quickly got the margin back to double digits and stayed in command the rest of the way.

“They got on a roll a little bit, they scored a few times in a row,” Iowa coach Fran McCaffery. “We stopped running. And then we started quick-shooting the ball a little bit — contested 2's, nobody on the glass.”

While Davis was coming off a 37-point, 14-rebound performance in a 74-69 victory Monday at No. 3 Purdue, Murray had 35 points and eight rebounds the same night in Iowa's 80-75 win over Maryland.

Davis wasted no time picking up right where he’d left off against Purdue. The 6-foot-5 sophomore scored 15 points in the first 12 minutes and had 19 points by halftime.

Although Davis didn’t score at all for nearly the first 8½ minutes of the second half, Wisconsin's lead held steady because of the way his teammates were producing.

“We’ve got a lot of guys who bring a lot of different things to the table,” said Wisconsin’s Tyler Wahl, who went 6-of-7 for 16 points and also pulled down nine rebounds.

Brad Davison added 18 points for Wisconsin, which shot 50%, while Steven Crowl had 12 and Chucky Hepburn 11.

For Iowa, Jordan Bohannon and Kris Murray scored 12 each and Patrick McCaffery had 10.

Davis heated back up in plenty of time to seal the victory. His first basket of the second half came on a jumper with 11:36 left, which he followed with a dunk on an alley-oop from Jahcobi Neath to extend Wisconsin’s lead to 65-48 with 11 minutes remaining.

Wisconsin eventually led by as many as 23. Iowa didn't get the margin back into single digits until 15 seconds remained in the game.

The first-half scoring ended with 8.2 seconds remaining when Davison sank three free throws after officials ruled McCaffrey had fouled him on a 3-point attempt in front of the Hawkeyes’ bench.

McCaffery motioned with his legs in an apparent protest that Davison had kicked his leg out in an attempt to draw the foul. Hawkeyes coach Fran McCaffery, Patrick’s father, also voiced his displeasure. But the call stood, enabling Wisconsin to head to the locker room with a 45-32 lead and plenty of momentum.

Murray took a hard fall under the basket with 15:10 left, but he missed only 32 seconds of action before returning to the game.

Iowa: The Hawkeyes missed seven of their first eight 3-point attempts and didn’t get their second 3-point basket until 9:19 remained in the game. Iowa also shot 11 of 19 on free-throw attempts and was outrebounded 43-26.

Wisconsin: The Badgers showed no signs of a letdown after their big victory at Purdue and led for the last 38 minutes of the game. Wisconsin’s ability to maintain its double-digit lead even when Davis wasn’t scoring showed that the Badgers are no one-man show. Wisconsin is off to its fastest start since 2016-17, when it won 13 of its first 15 games.

Wisconsin already has assured itself of rising at least a few spots when the next Top 25 comes out Monday. If the Badgers win at Maryland this weekend, they should land in the top 15 and could get even higher.

Wisconsin: At Maryland on Sunday.