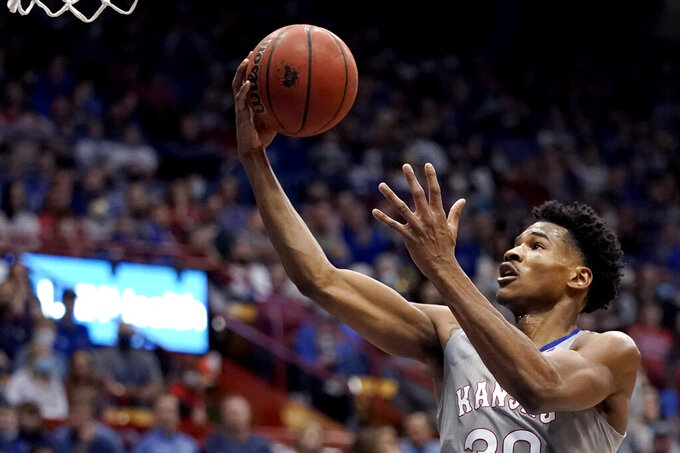 Kansas' Ochai Agbaji puts up a shot during the first half of an NCAA college basketball game against Nevada on Wednesday, Dec. 29, 2021, in Lawrence, Kan. (AP Photo/Charlie Riedel) 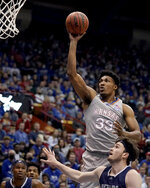 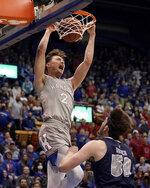 LAWRENCE, Kan. (AP) — After Kansas had its game against Harvard wiped out by COVID-19, and Nevada had its Mountain West opener against San Jose State postponed for the same reason, Wolf Pack coach Steve Alford jumped at the chance to visit storied Allen Fieldhouse for the first time.

By halftime of the hastily arranged fill-in game, he was probably regretting it.

Christian Braun scored 22 points, Ochai Agbaji added 16 and the sixth-ranked Jayhawks rolled to an 88-61 victory over the turnover-prone Wolf Pack before another sellout crowd in the storied arena on Wednesday night.

“There's a lot of people out there scrambling right now. There was like, 75 games scheduled tonight and 32 were canceled or postponed,” Jayhawks coach Bill Self said. “I'm glad we were able to set this up.”

It was the first meeting of the schools since Nevada dealt Kansas a rare loss in the Phog in 2005.

The outcome was far different this time.

Dajuan Harris had a career-high 14 points and David McCormack also scored 14 for the Jayhawks (10-1), who slowly built a 39-17 halftime lead before using a 12-0 run early in the second half to put the game out of reach.

“The last time we played we were poor,” Self said, “so I think they were excited to play.”

With all the scheduling changes this week, it wasn't surprising that both teams were a bit discombobulated.

The Wolf Pack, hounded relentlessly by a defense that forced 20 turnovers in each of its past two games, nearly had that many in the first half alone Wednesday night. In fact, Nevada at one point had turned the ball over nearly as many times (14) as it had taken shots (18) before finishing with 21 turnovers for the game.

Not that the Jayhawks looked like a top-10 team the whole way. They had 10 turnovers at halftime and 14 in all.

Still, a hot start from Braun coupled with a big run over the final couple minutes — including a turnover by DeAndre Henry that turned into Agbaji's windmill dunk — sent the Jayhawks into the locker room with a comfortable lead.

“Like, an ‘F.’ That was a horrible windmill,” Braun said in grading Agbaji's dunk. “Maybe his legs were tired.”

Kansas initially struggled to pull away in the second half, but it got some help Alford's temper. The Nevada coach was incensed a foul wasn't called when Sherfield scored a layup high off the glass, and both teams had already retreated up the floor when a whistle was blown and Alford was hit with a technical foul.

Braun hit both of the free throws, triggering a 10-0 run. Harris drilled a 3-pointer, Abgaji added back-to-back transition dunks, and Remy Martin curled in a 3-pointer as the lead ballooned to 61-36 with 12 1/2 minutes to go.

“We have so many weapons,” Braun said. “We have a lot of guys that have learned how to play with each other.”

Kansas coasted the rest of the way to its 24th straight nonconference home win.

“We're taking steps in the right direction,” Jayhawks forward Jalen Wilson said. “We have a good team, we have a lot of good pieces. We just have to find that rhythm, get a good pace going into conference play.”

Nevada never gave itself a chance with its turnovers. And when the Wolf Pack did set up in the half court, the Jayhawks dominated them in the paint. Kansas finished with a 46-14 scoring edge there and a 39-33 rebounding advantage.

Kansas scheduled the game after Harvard dropped out to to prevent a nearly two-week break before it was supposed to begin Big 12 play this weekend. The Jayhawks' game at Colorado was canceled just hours before tipoff last week, which meant they hadn't been on the floor since struggling to an 80-72 win over Stephen F. Austin on Dec. 18.

Nevada opens Mountain West play against New Mexico on Saturday. The Jayhawks return the same day against George Mason, which added to the schedule when their Big 12 opener against TCU was postponed due to COVID-19 protocols.