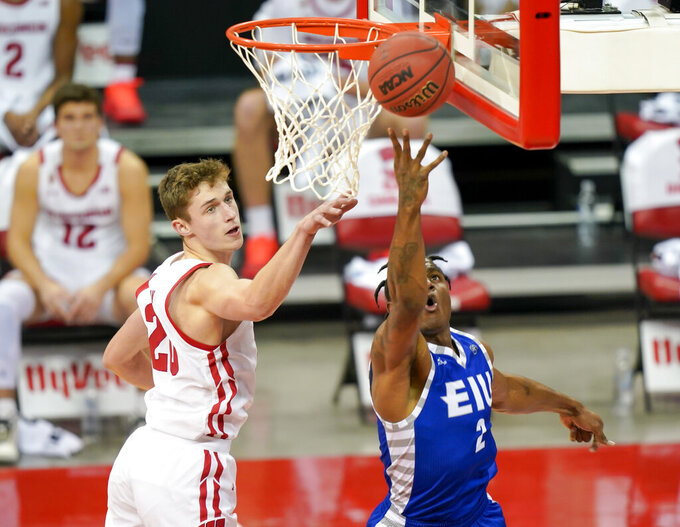 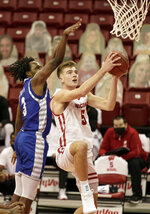 MADISON, Wis. (AP) — Wisconsin big man Nate Reuvers posed all sorts of problems for Eastern Illinois, which had no way to replicate him in practice.

Panthers coach Jay Spoonhour doesn’t exactly have a roster full of 6-foot-11 players who can score inside and out, rebound and block shots.

Reuvers did all three Wednesday night as the seventh-ranked Badgers began their season with a 77-67 victory over Eastern Illinois. The senior scored 18 points, finishing 2 of 3 on 3-pointers, and grabbed nine rebounds to go with five blocks.

“I was just amazed at the way he blocked shots and moved his feet and how agile he is. We don’t have any simulation for that. He’s just very good,” Spoonhour said.

Still, it wasn’t a cakewalk for the Badgers.

Eastern Illinois put itself in a huge hole by shooting poorly in the first half (24% from the field), failing to take care of the ball (six turnovers) and playing porous defense as Wisconsin shot 52% in the opening period.

After falling behind 43-20 at halftime, a 16-4 run early in the second half pulled the Panthers to 56-42. Josiah Wallace later closed the gap to 12 midway through the second half.

But Wisconsin’s Tyler Wahl scored on a drive and a dunk on back-to-back possessions, Ben Carlson drained a 3 and the threat was snuffed out. Eastern Illinois only trimmed the margin to 10 in the final minute with Wisconsin’s starters on the bench.

Reuvers said it was unacceptable that the Panthers scored 47 points in the second half.

Carlson came off the bench to score 13 points for the Badgers, and D’Mitrik Trice had 11.

BIG MEN ON THE FLOOR

One of the big questions for the Badgers heading into the season was how coach Greg Gard would use Reuvers and 6-10 Micah Potter. The pair only started three games together last season after Potter became eligible in December following his transfer from Ohio State. Still, Potter was second on the team in scoring at 10 points per game behind Reuvers at 13 ppg. The pair started both halves as Gard mixed and matched lineups.

Potter finished with nine points and eight rebounds. He also limped off the floor gingerly early in the second half, got treatment and returned.

Gard said he was mixing lineups to help his players get a feel for each other. “The biggest thing is just trying to get comfortable now that we’re in this environment and playing games and these are the guys that are going to be on the floor,” he said.

As experienced as the Badgers are — returning all five starters and seven of the top eight scorers from a team that won a share of the regular-season Big Ten title — underclassmen aren’t expected to shoulder a heavy load this season. But in addition to Carlson’s production off the bench, fellow freshman Jonathan Davis chipped in with eight points on 4-of-7 shooting. “I thought they looked pretty comfortable,” Gard said. “There were a couple of instances where I think the best teacher sometimes is experience. For them to get that experience and have something not go their way or make a mistake, that’s OK. That’s how you learn from it.”

Eastern Illinois: The Panthers shrugged off their early struggles to give the Badgers a test for part of the second half. But it simply wasn’t enough.

Wisconsin: It wasn’t as easy as many would’ve expected, and the Badgers have some things to clean up. But this senior-laden team is thinking more about where it will be this spring than a tune-up in late November.