Smith, Arkansas hold off Texas Tech 68-66 in NCAA 2nd round 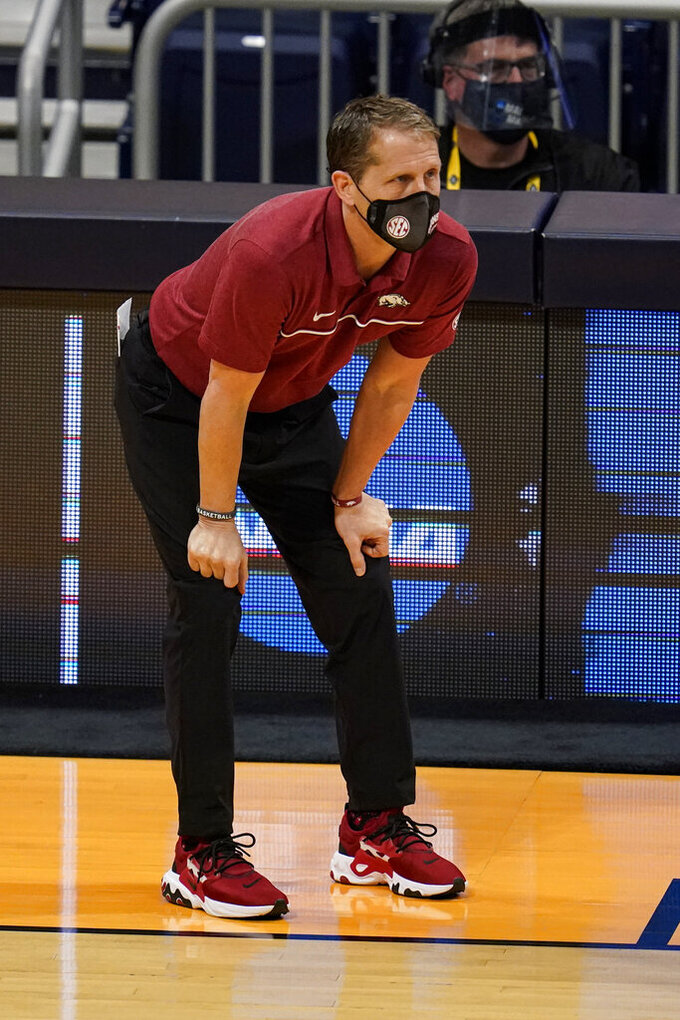 Arkansas head coach Eric Musselman watches from the sideline as his team played against Texas Tech in the first half of a second-round game in the NCAA men's college basketball tournament at Hinkle Fieldhouse in Indianapolis, Sunday, March 21, 2021. (AP Photo/Michael Conroy) 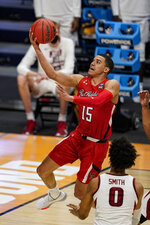 INDIANAPOLIS (AP) — His players began spilling onto the court at the horn, and Arkansas coach Eric Musselman was right there with them — only to break away to climb atop a table with arms raised.

The Razorbacks are going back to the NCAA Tournament's Sweet 16 for the first time since the “40 Minutes of Hell” days a quarter-century ago.

The South Region’s No. 3 seed is off to the regional semifinals for the first time since 1996 under famed former coach Nolan Richardson, a season that marked the end of a nine-year run that included a Final Four trip in 1990, a national championship in 1994 and a runner-up finish in 1995.

Now Musselman's Razorbacks can dream a little bit, too.

The postgame celebration came after a tense finish, which began with Smith defending Kyler Edwards beyond the 3-point arc. Edwards drove into the paint with Smith on his hip and missed a layup, with Arkansas guard JD Notae snagging the rebound and sprinting up court to run the final seconds out.

“Our big thing was we did not want to give up a 3 under any circumstances," Musselman said.

After his table hop, Musselman stopped on his way off the court to mark the moment once more by ripping off his mask to yell to Razorbacks fans and repeatedly pump his fist in exuberance.

Terrence Shannon Jr. scored 20 points for sixth-seeded Texas Tech (18-11), which struggled with its shot for a long stretch only to regain its touch right as Arkansas seemed poised to pull away with a 13-point lead.

The Red Raiders — finalists in the 2019 tournament — also had two late chances to take the lead in the final 90 seconds. But Mac McClung missed the front end of a 1-and-1 at the line with 1:15 left in a 67-66 game, and then Shannon missed a shot inside with about 30 seconds left on the next possession.

“Obviously kind of a classic NCAA Tournament game,” Texas Tech coach Chris Beard said. “It could have gone either way. I was hoping it was going to be one of the games where the team that had the ball last wins it.”

Texas Tech: The Red Raiders advanced with Friday’s win against 11th-seeded Utah State, shooting nearly 57% after halftime and scoring 28 points off turnovers for the game. But they couldn't replicate that formula, going 6 for 35 (17%) from midway through the first half until about 8 minutes left. The Red Raiders forced just nine turnovers that led to five points.

“He said we’re going to win the game on the offensive end if we get stops and that’s what we did,” Shannon said. “But we didn’t capitalize at the end.”

Arkansas: The Razorbacks rallied from a 14-point hole in their first-round win against high-scoring Colgate, then had to come back from 10 down early in this one. Smith followed a 29-point game against Colgate by making 9 of 11 shots against the defensive-minded Red Raiders.

“It shows that we can play with anybody," Smith said. “It doesn’t matter what you throw us. We’re going to be able to compete.”

Star freshman Moses Moody scored 15 points for the Razorbacks, who got a boost from fellow freshmen Jaylin Williams (10 rebounds) in his third start and Davonte Davis (15 points). Davis also helped hold McClung to nine points, well below his 15.8-point average.

Moody also had an improbable key shot. After Chibuzo Agbo banked in a straightaway 3-pointer to bring Texas Tech within 58-57 with 5:30 left, Moody answered by banking in his own 3 off a crossover.

“They may be freshmen, but they don’t play like freshmen,” Smith said. “They've got a lot of a lot of swagger.”

The Razorbacks will face Oral Roberts after the Golden Eagles followed their first-round upset of No. 2 seed Ohio State with another big win.