Stackhouse eager to build on 1st winning season at Vandy 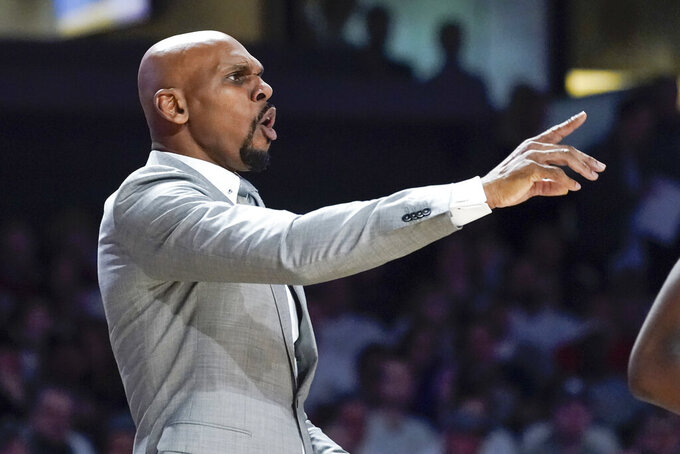 FILE — Vanderbilt head coach Jerry Stackhouse directs his players in the first half of an NCAA college basketball game against Dayton, March 20, 2022, in Nashville, Tenn. With Scotty Pippen Jr. gone, Stackhouse has a roster that should keep the Commodores from missing the Southeastern Conference's top scorer. (AP Photo/Mark Humphrey, File) 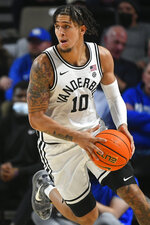 NASHVILLE, Tenn. (AP) — Scotty Pippen Jr. finally left Vanderbilt for the NBA. Going into his fourth season, coach Jerry Stackhouse has a roster that should keep the Commodores from missing the Southeastern Conference's top scorer.

“We're trying to build that hierarchy of allowing our older guy to come in and do what they're supposed to do but got ome young guys that's knocking on the door and really pushing them,” Stackhouse said. “And I think that's going to make our team overall make us better.”

Vanderbilt capped Stackhouse's third season with his first winning record at 19-17. He also ended the Commodores' postseason drought, guiding them to the NIT quarterfinals in their first postseason tournament since reaching the 2017 NCAA Tournament.

Stackhouse has his best recruiting class so far and he brought in a pair of transfers in point guard Ezra Manjon from UC Davis and Emmanuel Ansong from Wisconsin-Green Bay.

It's a roster that Stackhouse thinks can move the ball faster, helping his shooters get better looks at the basket. The Commodores are helped by being healthier than a year ago when Tyrin Lawrence was recovering from an ACL torn in January 2021, and 7-footer Liam Robbins was limited to 15 games by a knee issue.

“Our development of some of our guys from last year to now is a big reason why we can play the way we want to play right now,” said Stackhouse, who received a recent contract extension. “I don't think they were ready to play that way last year.”

Pippen not only led the Commodores in scoring, he was the Southeastern Conference's best scorer averaging 20.4 points a game. After testing his NBA draft stock for a second straight offseason, this time Pippen signed with an agent. He went undrafted but signed a two-way contract with the Los Angeles Lakers. Vanderbilt also lost starting point guard Rodney Chatman to graduation.

Three starters are back along with Tyrin Lawrence and Liam Robbins, who started at least 10 games apiece. The Commodores are led by Jordan Wright, who was Vanderbilt's second-leading scorer averaging 12.3 points a game. Wright also ranked 11th in the SEC with 6.4 rebounds a game.

Myles Stute led the SEC shooting 43.2% beyond the arc, and Quentin Millora-Brown started 30 of his 36 games played. Millora-Brown led Vanderbilt taking 23 charges, and he ranked third with 42 assists.

Stackhouse has seven Commodores back, making up 61.1% of last season's scoring and 68% of their rebounding.

Stackhouse has a recruiting class that Rivals ranked 17th nationally with Colin Smith, Noah Shelby and Lee Dort all four-stars and 24th by 247Sports. ESPN counted Malik Dia as a four-star recruit.

Vanderbilt also added a veteran point guard in Manjon to help replace Pippen. Manjon was a three-time All-Big West pick while at UCDavis.

The Commodores had a chance to grow closer in August during a trip to Europe where they visited Italy, France and Monaco, and they went 3-0 in exhibitions.

The Commodores open Nov. 7 hosting Memphis and coach Penny Hardaway, whose Tigers ended their own NCAA Tournament drought in March. The nonconference slate includes visits to Templle, VCU and Pittsburgh.

Vanderbilt opens SEC play Jan. 3 hosting South Carolina. The Dores visit Tennessee on Jan. 10 and host the Volunteers on Feb. 8. They also have a home-and-home with Kentucky starting in Nashville on Jan. 24 with a trip to Rupp Arena on March 1.