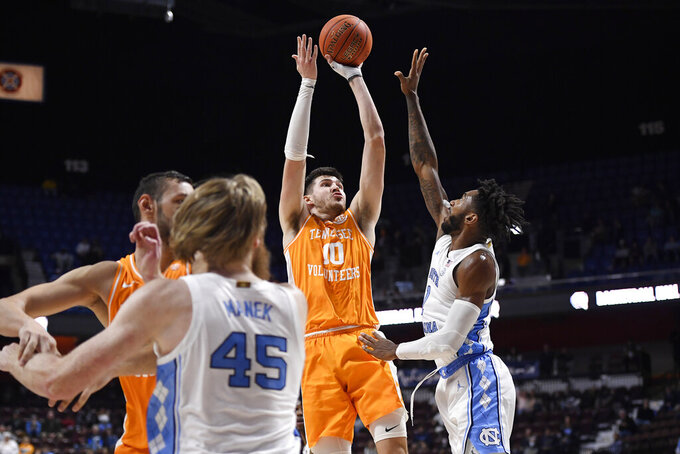 UNCASVILLE, Conn. (AP) — Tennessee turned to its two freshmen guards to bounce back from its first loss of the season and win the consolation game of the Hall of Fame Tip-Off tournament.

Zakai Zeigler scored 18 points to go with five assists, Kennedy Chandler had 14 points, eight assists and five rebounds, and the 17th-ranked Volunteers cruised past No. 18 North Carolina, 89-72 on Sunday.

“Both those guys really did a good job in terms of, I thought, even simple sort of motion,” coach Rick Barnes said. “We obviously like to get (Zeigler) running to the basket some, which there at the end he and Kennedy, where they're playing those two-man games, he's very effective there as well.”

Santiago Vescovi added 17 points and nine rebounds for the Vols (3-1), who were coming off a 71-53 loss to Villanova on Saturday.

Brady Manek hit six 3-pointers and scored 24 points for the Tar Heels (3-2), who fell to Purdue in Saturday’s opening round. Armando Bacot had 16 points and 12 rebounds after scoring just two points and fouling out on Saturday.

Tennessee, which went with a three-guard lineup early in the first half, led by seven points at halftime. The Vols extended that to 12 early in the second half on a run capped when Vescovi stole the ball from Dawson Garcia and laid it up on the other end.

The Volunteers would then answer whenever North Carolina made little runs.

A driving layup by Zeigler pushed the lead to 74-57 with just over 7 minutes to go and his 3-pointer a couple of minutes later off a steal by Brandon Huntley-Hatfield made it 79-60, essentially putting the game out of reach.

Zeigler said he and Kennedy make it hard on defenses when they are on the floor together.

“We're both quick, lightning fast," he said. “I like playing up-tempo and I'm pretty sure he does. I've never played with somebody like that, only maybe one or two players in my entire life. So it's just great.”

North Carolina had won 10 of the previous 11 matchups between the programs, a series that dates to 1911. The Volunteers' last win over the Tar Heels came in 1949.

North Carolina: Carolina shot 40% from the floor, but came into the game shooting 50.6%. The Tar Heels hit 10 more 3-pointers and are averaging more than nine per game, which is on pace to break the school record of 8.7 per game set in 2018-19.

Tennessee: The Volunteers dominated in the paint, outscoring North Carolina 54-22. ... The Vols, who had 18 turnovers on Saturday, had just 10 Sunday, leading to 14 North Carolina points. The Vols scored 19 points on 13 UNC giveaways.

North Carolina gave up 96 points in the paint during the two-day tournament. Coach Hubert Davis said that has to change, because he believes his players have what it takes to be a great defensive team.

“There has to be a competitive fire and nature to guard your guy and keep him out of the lane,” he said.

Tennessee: Tennessee heads back to Knoxville and will host Tennessee Tech on Friday