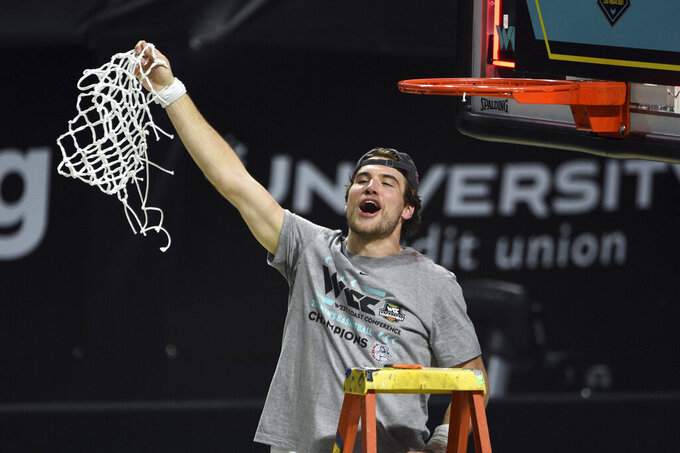 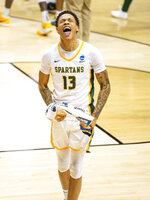 Coach Mark Few can appreciate what’s at stake, and the appropriateness of the NCAA Tournament being held all in Indiana, as Gonzaga continues its push for perfection.

The Bulldogs, 26-0 and the nation’s top overall seed, open their tournament run against Norfolk State in a West Region first-round meeting Saturday. There's history on the line, with Gonzaga seeking to become the first champion to finish without a loss since Bobby Knight's Hoosiers went 32-0 in 1976.

During a season in which Gonzaga won 23 straight by double-digit margins, Few reflected on how far the Bulldogs have come in making their 22nd consecutive tournament appearance.

No longer the beloved small-school underdogs earning national adulation with a string of bracket-busting upsets, the Zags are truly among the ranks of the nation’s elite now. Few recalled when perceptions began to turn in acknowledging the weight of expectations resting on his and the Bulldogs’ collective shoulders.

“Absolutely there is. You’re theoretically thought to win every game,” Few said. “I vividly remember dating back to 2013, I think it was our first seed, and the entire crowd in Salt Lake City flipped on us, started cheering for Southern.”

He expects it to be no different now, especially given that Gonzaga’s arrival in Indiana threatens to end the state’s 45-year claim of being home to the last undefeated champion.

“I don’t think anybody’s going to be rooting for us here with everything that’s on the line,” Few said. “And that’s fine, too. Any emotion is better than no emotion.”

The Zags are stacked with a lineup featuring three John Wooden Award finalists in Corey Kispert, Drew Timme and Jalen Suggs. Gonzaga leads the nation in averaging 92 points per outing, and has shot 50% or better from the field 23 times this season.

The Bulldogs’ tightest margin of victory was an 87-82 win over West Virginia on Dec. 2. And they have wins against three potential West opponents: second-seeded Iowa (which opens against Grand Canyon), No. 3 Kansas (Eastern Washington) and No. 4 Virginia (Ohio).

Norfolk State (17-7) presents the first test, with the Mid-Eastern Athletic Conference team coming off a 54-53 win over Appalachian State in a First Four meeting Thursday.

Coach Robert Jones respects the challenge while noting his players have no reason to feel pressure in facing what he called: “The Lakers of college basketball.”

“Once you get here, you’re playing with house money,” Jones said of the Spartans, who are making just their second tournament appearance. “It’s no secret it’s going to be a challenge. But at the same time, we have to lace them up and we have to play the basketball game.”

“We always just talk about being us,” Nembhard said. “I think we’re going to respect every opponent and just hold ourselves accountable, and we’ll be just fine.”

There’s another team from Washington that’s pretty good — 14th-seeded Eastern Washington from Cheney, some 20 miles from the Spokane-based Bulldogs.

Groves sees the game against Kansas as a chance to put his program on the map.

“I definitely think this year, and down the road even, we’ll definitely continue improving and growing and becoming more well-known across the country for college basketball,” he said.

While Gonzaga eyes a national title, the Eagles have a more modest objectives.

“Our goal is to go into the tournament and hopefully pick up a win or two and see how far we can get,” Groves said.

Iowa’s Luka Garza is one of the most acclaimed big men in college basketball. Grand Canyon center Asbjorn Midtgaard has finally made a name for himself, too.

The 7-footer from Denmark will face the unanimous first-team Associated Press All-American in the opening round, a big leap for a transfer who started only four games in three seasons at Wichita State.

The 6-11 Garza is averaging 23.7 points and 8.8 rebounds per game. He’s Iowa’s all-time leading scorer and the Big Ten player of the year.

Midtgaard is averaging 14.0 points and 9.9 rebounds a game for the nation’s No. 5 rebounding team. He also leads the nation shooting 70.7% from the field.

Guard Joseph Yesufu led Drake to the school’s first NCAA Tournament win in 50 years. The teammate he replaced in the starting lineup last month was just as excited. Maybe more.

Junior point guard Roman Penn, whose season ended when he broke his foot Feb. 21, was part of an exuberant rooting section during a 53-52 First Four win over Wichita State on Thursday.

“Roman was my biggest mentor when I first came here,” said Yesufu, who scored 21 points in 40 minutes. “He’s constantly in my ear because he knew I could be a better player."

By Larry Fleisher an hour ago
By Jim Hoehn 2 hrs ago
2 hrs ago
By Hank Kurz Jr. 3 hrs ago
3 hrs ago