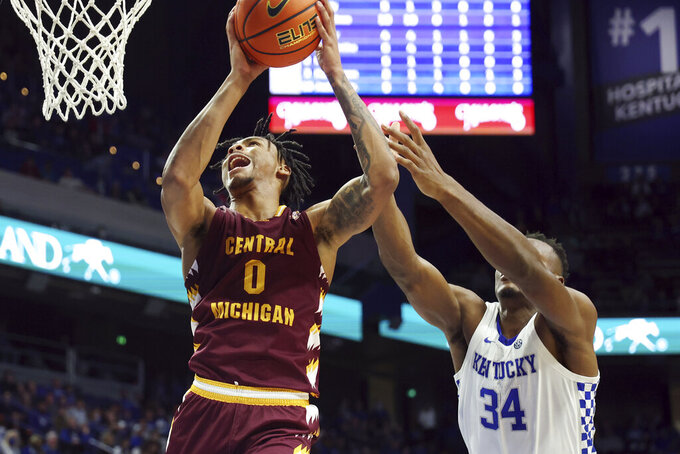 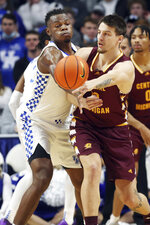 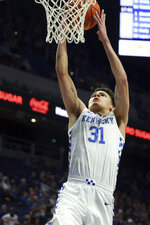 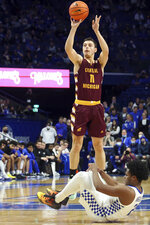 LEXINGTON, Ky. (AP) — One difference between this rout and others before it was the lightning pace No. 9 Kentucky played toward building it.

The Wildcats (6-1) shot 60% in the first half before cooling off to finish 43% overall while dominating the rebuilding Chippewas (1-5) in most phases. They led 25-5 within seven minutes and maintained at least a 25-point cushion for much of the contest. Kentucky's six wins have been by an average margin of 28.3 points.

Considering the Wildcats played short-handed yet again because of injuries and illness, their latest lopsided win revealed more about their resolve.

“I feel like these games are good for us because we’re really working on our team chemistry, still just trying to find ways to play off of each other, find ways to get easier baskets," Washington said. "Especially with teams like that, that came out playing hard and aggressive. That’s the type of stuff we need to face before we go more in depth into the season.”

Jermaine Jackson Jr. had 11 points, and Cameron Healy and Miroslav Stafl each added nine for Central Michigan, which dropped its third consecutive game. It spoiled the Lexington return of first-year Chippewas coach Tony Barbee, who took over the program in April after seven seasons as a Kentucky assistant.

“We came out a little nervous and I’m sure it had a lot to do with their pressure and how they played,” Barbee said. "Two things you can’t do against Kentucky is give them transition baskets and second-chance points on the offensive glass.”

At the same time, Barbee's squad of 12 newcomers displayed some of what he learned with the Wildcats. While the Chippewas never got within striking distance, their zone helped hold Kentucky to 32% shooting after the break and finished 7 of 16 from long range.

“I’m telling Tony he did a great job of saying, ’We’re not backing down,'" said Kentucky coach John Calipari, who improved to 18-1 against former assistants. "His team never stopped. They played physical. They’ll win their share.”

Tshiebwe was 6 of 8 from the field and 8 of 11 from the foul line in 26 minutes to key his sixth double-double this season. Washington was 6 of 11, including 3 of 5 from behind the arc, and chipped in six rebounds as Kentucky controlled the boards 47-30.

Keion Brooks Jr. returned from a one-game absence because of illness to score nine points and grab four rebounds in 17:36. ... Dontaie Allen also had nine points on 3-of-11 shooting. ... Sahvir Wheeler had seven points and six assists, but also three of Kentucky's six turnovers.

Central Michigan came in shooting just 39% from the field and those struggles continued as the Chippewas were just 10 of 30 in the first half, including a 3-of-16 first-half stretch that briefly dug a 30-point hole. They improved to 50% in the second half and even outscored Kentucky's bench 29-27, but faced too deep a hole.

Kentucky came out fast, created opportunities and made them count in perhaps its best start this season. The Wildcats shot just 32% after halftime but were never really threatened. They may have to wait until facing Notre Dame on Dec. 11 to be seriously challenged in their nonconference schedule.