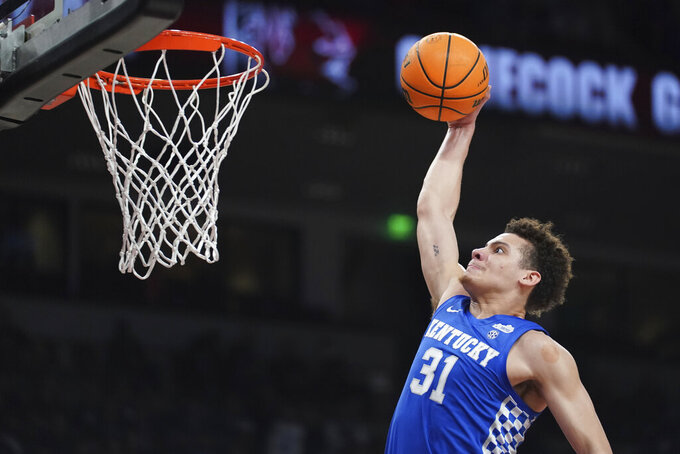 Kentucky guard Kellan Grady goes up for a dunk during the first half against South Carolina in an NCAA college basketball Tuesday, Feb. 8, 2022, in Columbia, S.C. (AP Photo/Sean Rayford)

COLUMBIA, S.C. (AP) — Kentucky coach John Calipari has his eyes on March. And that's why he didn't mind his team losing a big lead before its latest win.

Oscar Tshiebwe posted his sixth straight double-double with 18 points and 14 rebounds and TyTy Washington scored 12 of his 14 points in the second half as the fifth-ranked Wildcats beat South Carolina 86-76 Tuesday night.

But Kentucky (20-4, 9-2 Southeastern Conference) squandered an 11-point lead before getting things in gear to reach 20 wins for a 13th time in the past 14 seasons.

Washington and Tshiebwe led the charge on the way to Kentucky's fifth straight victory — and fourth in a row in league play.

“You've got to keep playing,” said Keion Brooks Jr., who scored 15 points and was among six Wildcats in double figures. "Now, it's our time to go on a run.

“We just weathered the storm,” he said.

Washington broke the tie with a bucket, added a foul shot and then a nifty pass to Brooks for a dunk. The 6-foot-9 Tshiebwe had a couple of inside baskets and when Washington nailed a 3-pointer, the Wildcats were up 58-47 and cruising.

Washington had 12 of his 14 points in the second half.

Tshiebwe said he found a burst of energy after halftime South Carolina couldn't match. "That was a chance for me to grab everything who had 12 of his boards in the second half.

For as good as Kentucky typically is everywhere else in the SEC, it's had its troubles at South Carolina. The last visit, it was Jermaine Couisnard's 3-pointer as the buzzer sounded that lifted the Gamecocks to an 81-78 victory over then then-10th-ranked Wildcats.

Kentucky came out ready to put away South Carolina in the first half and led 39-28 after eight consecutive points by Jacob Toppin.

But it was gone over the next seven minutes as South Carolina put together a 15-4 run.

Bryant had 18 points and 14 boards while Couisnard added 17 points for South Carolina.

“Our defense was not very good today and then offensively, we keep shooting 30 percent from the field,” South Carolina coach Frank Martin said. “It's going to be hard to beat these teams.”

Kentucky: The Wildcats had the speed, smarts and talent to turn things on again when the Gamecocks made it a game in the second half. Behind Tshiebwe and Washington, Kentucky should go deep into the postseason.

South Carolina: It's been a difficult stretch for the Gamecocks. They were within striking distance of their past two ranked foes at home — 38-37 to No. 19 Tennessee in the second half last Saturday — and wound up losing both by double figures.

Kentucky reserve forward Jacob Toppin had all his 10 points in the first half before coming down hard on his ankle and walking awkwardly to the locker room. He did not return to the game after that. Calipari did not have an update on Toppin's condition.

Former South Carolina football coach Steve Spurrier was on hand to present his former Gamecocks assistant — and current coach Shane Beamer — with a new award named for the Ball Coach given to the best performance by a first-year coach. Beamer shared the award with Tennessee's Josh Heupel. “Gamecock Nation is always going to be with the Spurriers,” Steve Spurrier told the crowd.