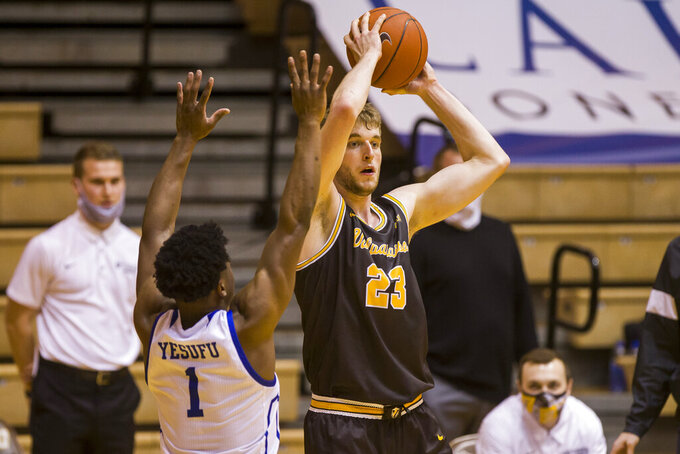 Valparaiso's Ben Krikke (23) looks to pass around Drake's Joseph Yesufu (1) during the second half of an NCAA college basketball game on Sunday, Feb. 7, 2021, in Valparaiso, Ind. (AP Photo/Robert Franklin)

VALPARAISO, Ind. (AP) — Unbeaten no more, No. 25 Drake doesn't plan to dwell on its first defeat.

Ben Krikke scored 15 points and Valparaiso held onto a second-half lead, pulling away to beat the Bulldogs 74-57 Sunday.

The loss by Drake (18-1, 9-1 Missouri Valley) left No. 1 Gonzaga and No. 2 Baylor as the only remaining major college teams with spotless records this season.

“We’re not going to overreact to a loss,” third-year Drake coach Darian DeVries said. “I’ve been doing this for 23 years and I’ve never been part of an undefeated season before. It’s about how you respond. Our guys will get focused on the next game. We’ll learn from this and we’ll move on.”

A day after Valparaiso (7-12, 4-6) squandered a double-digit lead in the second half and lost to Drake 80-77, the Crusaders pulled away for just their second victory over a ranked opponent since beating Mississippi in the 1998 NCAA tournament.

“This was a huge win for us, especially after (yesterday),” Valparaiso coach Matt Lottich said. “To have our guys respond the way they did today, it means a lot. We got to play a ranked team back-to-back on our home floor. That rarely happens. Actually, that never happens.”

Roman Penn scored 17 of his 19 points in the second half, trying to rally the Bulldogs back from a 36-24 halftime deficit. He helped cut Valparaiso’s lead down to 10 points on multiple occasions, but the Bulldogs could never get within single digits.

Drake had recently come back double-digit deficits against Missouri State and Valparaiso as well as surviving an overtime thriller against Illinois State.

The victory was especially sweet for the Crusaders after they’d blown big second-half leads against Vanderbilt, Purdue and Evansville this season, not to mention Saturday’s loss.

Valparaiso freshman Jacob Ognacevic scored eight points during a 10-0 run midway through the first half that gave the Crusaders the lead for good. Ognacevic finished with 11 points.

“Honestly, (a loss) was kind of bound to come,” Penn said. “We weren’t playing too good and we were getting down early. It’s one loss. It’s hard to go undefeated. It was super fun to go through this whole process, but we just didn’t come ready to play.”

Drake: The Bulldogs had overcome big second-half deficits twice in the last two weeks, but fell short this time.

Valparaiso: After blowing second half leads against Evansville (11) and Drake (10) in their last two games, the Crusaders earned a much-needed victory to stop a three-game losing streak in the MVC.

Drake: The Bulldogs are likely to fall out of the Associated Press Top 25 after they earned their first ranking in 13 years last week.

Drake: Will host Northern Iowa on Wednesday evening before beginning a two-game home series against Loyola. The Bulldogs and Ramblers are the top two teams in the Missouri Valley Conference.

Valparaiso: Will host Bradley on Wednesday evening in a rematch of the 2019-20 Missouri Valley Conference tournament title game. The Crusaders beat Bradley 91-85 at the ARC last month.