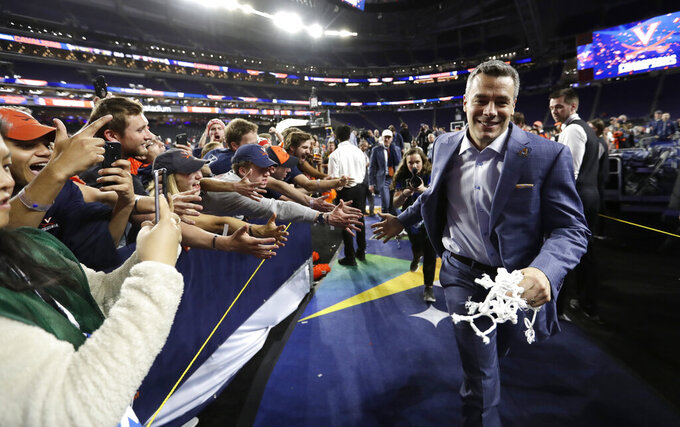 Tony Bennett and Virginia proved last season that a defense-first approach short on offensive style points can still be a winning formula.

The 11th-ranked defending national champions have work to do, however, to build the Cavaliers into a team capable of repeating.

"I think with each team, it's different," Bennett said. "This last year I think we were the No. 2 team in the country for offensive efficiency, and I think that word, efficiency, is most important. Some team can score a little easier, and I think you have to look at that."

In the trio that left for the NBA, the Cavaliers lost 245 of their 321 3-pointers from last season. Clark, a sophomore point guard, is the top returner, with 29.

That will likely necessitate a shift to a greater emphasis in inside scoring, where the 6-foot-8 Key and 7-footer Huff are more likely to thrive.

"I think the physicality and the size factor is definitely one of our strengths," Bennett said.

Diakite, whose short jumper off a feed from Clark sent their Elite 8 game against Purdue to overtime, said he'll also remain driven by a memory from two years ago, when Virginia was seeded first overall in the NCAA Tournament and lost 74-54 to UMBC to become the first top seed to lose to a No. 16 seed in tournament history.

Many of the players who will be counted on this year were not part of that team, however.

Huff is a player who fancies himself as a Dirk Nowitzki type, capable of knocking down 3-pointers and jump shots. He's also fond of blocking shots to rile up the crowd, but he will need to improve his defensive play to avoid foolish fouls and get more extended playing time than he's earned through his first two seasons.

Clark demonstrated savvy beyond his years as a freshman and will add a leadership role because of his experience. He's also a solid defender and takes good care of the ball, but he shot just 35% overall and 34.1% from 3-point range. Improved shooting would help greatly as the offense finds its new rhythm.

PUTTING THE D IN DEFENSE

Woldetensae and the incoming freshmen will need to be quick studies in Bennett's Pack-Line defense, which is the ticket to playing time for all the Cavaliers. Key is the most likely to develop into the rugged front-court defender that has been a staple of the Cavaliers' defensive prowess since Bennett took over 11 years ago.

Virginia added transfer senior Sam Hauser from Marquette, and he won't be able to play until next season, but he could have a huge role as a veteran in helping his young teammates learn the college game. Hauser averaged 14.9 points and 7.2 rebounds last season and is eligible to practice but not to compete.

Virginia opens at Syracuse and has a rematch with No. 23 Purdue in the Big Ten/ACC Challenge on Dec. 4. The Cavaliers also will host the Orange at John Paul Jones Arena and have a pair of games with No. 9 North Carolina and Virginia Tech. Their only meeting with No. 4 Duke will be at home on Feb. 29.