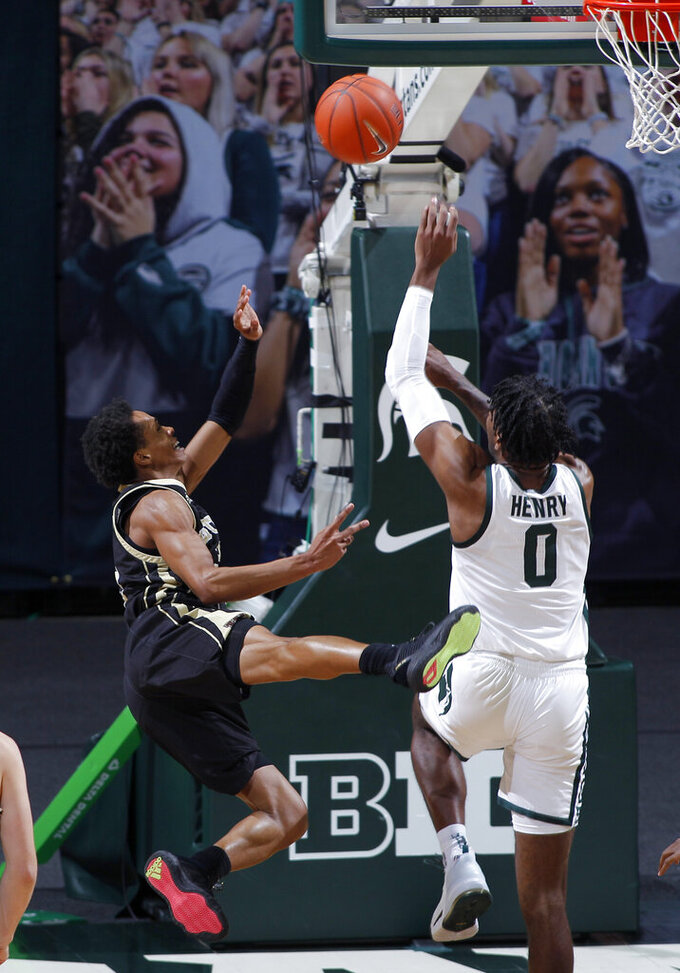 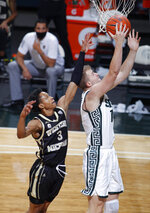 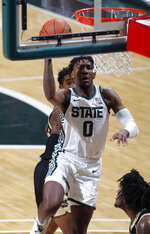 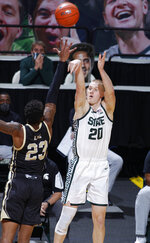 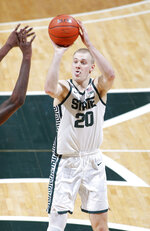 EAST LANSING, Mich. (AP) — Joey Hauser had his heels on the logo at half court and that was close enough to feel confident about making a long-range 3-pointer.

Hauser hoisted the shot without hesitating and made it, helping him finish with a career-high 24 points in a 79-61 win over Western Michigan on Sunday night.

The Marquette transfer scored in double digits in each of his first four games with the Spartans, and was making more than half of his shots before his breakout game. He was unhappy, however, about making just 3 of 13 on 3-pointers until connecting on a career-high six shots beyond the arc on 10 attempts.

Hauser credited his teammates for keeping his confidence up after his shaky start on shots from the outside by encouraging him to shoot more.

“They’ve had faith in me even though I missed a couple shots," he said.

The Spartans (5-0) seemed flat or perhaps just tired for a second straight game at home after beating No. 6 Duke with an inspired effort on the road. Playing for a third time in six days, Michigan State led the Broncos (0-2) by just two points midway through the second half and trailed for six-plus minutes in the game.

Hauser helped Michigan State pull away with a 19-6 run in the second half that was capped by a 3-pointer from about 30 feet.

“They’re a good team and when he gets going like that, they’re really tough," Broncos coach Clayton Bates said.

Western Michigan played for the first time since Nov. 25, when it lost by four points at Butler. The Broncos had their two previous games canceled because of coronavirus issues at Trine and due to their own outbreak, they did not play at Notre Dame.

Bates said his team was missing two starters and a key reserve against Michigan State because of coronavirus-related reasons.

“It’s been a crazy, wild week with our team," Bates said. “Our guys battled through adversity and competed as well as they did against Michigan State, so we’re incredibly proud."

B. Artis White, son of former Spartan basketball player Benny White, scored 19 points for the Broncos and Titus Wright had 16 points and 10 rebounds for the Mid-American Conference team.

Michigan State, which barely beat Detroit 83-76 on Friday night, was sluggish early. The start may have been slowed by Aaron Henry being forced to come off the bench because he was late to a team meeting.

Spartans coach Tom Izzo said he sat Henry after he was a few minutes late to a meeting after giving him a warning for arriving right on time for a previous meeting.

“There has to be some discipline and accountability — our society has zero," Izzo said.

Henry finished with 12 points and five assists, while Rocket Watts had 10 points and six assists.

Western Michigan: Bates, in his first year, was proud of his team's showing after being off for more than 10 days and facing one of the nation's top teams without three key players due to COVID-19 issues.

“We’ve played two games and our effort has been outstanding and we have to carry that over into every game we play," Bates said. “Michigan State sets the standard for how hard you play and our guys did not back down. Hopefully, we can learn from that.”

Michigan State: The deep and talented team is playing well in stretches and very poorly at times.

“We want to flip that switch on from the get go," Hauser said.

The Spartans should move up in the Top 25 on Monday after winning three games, including over No. 6 Duke.

Michigan State: Plays at No. 15 Virginia on Wednesday night, matching up Hauser with his brother, Sam, who also transferred from Marquette.

“It’s going to be a really good opportunity to see him and I’m hoping my family can attend the game," Joey Hauser said.