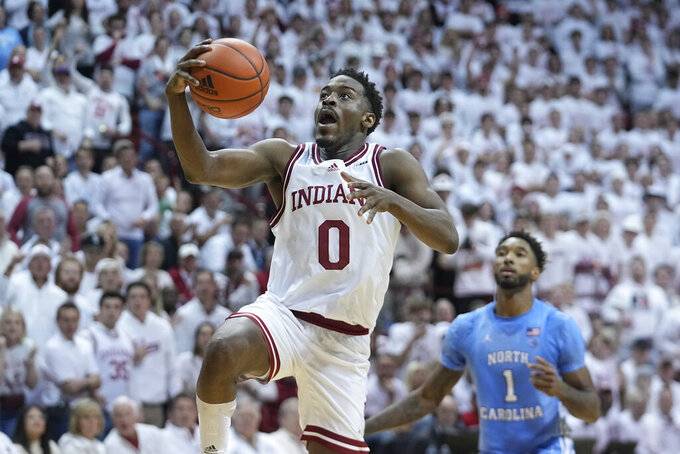 Indiana's Xavier Johnson (0) puts up a shot against North Carolina's Leaky Black (1) during the second half of an NCAA college basketball game, Wednesday, Nov. 30, 2022, in Bloomington, Ind. (AP Photo/Darron Cummings)

He had 21 points and 10 rebounds to lead No. 10 Indiana past No. 18 North Carolina 77-65. Afterward, Jackson-Davis soaked it in with a rare smile and some fun-filled analogies.

“I just thought that our defense was very constrictive, like an anaconda,” he said, drawing laughter. “It just really sucked the life out of UNC early. They couldn't get any big shots early and we kind of rode it out till the end of the game.”

The Hoosiers never let up against last year's national runner-up and this year's preseason No. 1 team. It was a defensive performance former coach Bob Knight would have cheered.

Two days after cracking the top 10 for the first time since 2017 and one day after Knight watched Indiana's practice, the Hoosiers (7-0) delivered their most impressive game of the season. They outscored North Carolina 50-24 in the paint and held the Tar Heels to 8 of 28 shooting in the first half and 1 of 7 to start the second.

Sure, they were facing team that played three games in four days last weekend in Portland, Oregon, and lost Sunday in quadruple overtime to No. 18 Alabama before a cross-country excursion. But Tar Heels coach Hubert Davis wasn't blaming this loss on fatigue.

“The difference was Trayce Jackson-Davis,” Davis said. “They have a player that they can run offense through that can generate points on every possession and as of right now we don't have that. We don't have that in the post.”

Pete Nance had 15 points and 12 rebounds to lead North Carolina (5-3), which has lost three straight for the first time since the 2019-20 season. Caleb Love scored 13 points.

And the Hoosiers made it look relatively easy.

They used a 7-0 first half run to start pulling away. After Puff Johnson briefly halted it with two free throws, the Hoosiers scored six straight to make it 34-24.

North Carolina cut the deficit to 35-29 at the half, but Indiana opened the second with an 11-2 charge to take a 46-31 lead and the Tar Heels couldn't get any closer than seven again.

“It was huge for us,” Jackson-Davis said. “You’ve got to beat the best to be the best is what Coach (Mike) Woodson always says and he’s not afraid to play the best.”

Jackson-Davis got the better of Armando Bacot in a matchup of preseason All-Americans.

Bacot came into the game with an injured right ankle and went to the locker room briefly after hurting his right shoulder just 3 1/2 minutes into the game. When Bacot returned, he battled foul trouble and struggled with his shooting touch as he scored four points in the first half.

He added tape to the shoulder at halftime and finished with 12 points and 10 rebounds while shooting 4 of 10.

North Carolina: The Tar Heels haven't lived up to expectations over the last week. Is it injuries? Could it be the grueling schedule? Whatever the explanation, this team is too talented to have lost three straight. Davis needs to find a solution before Atlantic Coast Conference play begins in earnest.

Indiana: The Hoosiers had serious foul trouble and still found a way to finish. It's a reflection of how much depth Woodson has created in just two seasons. In a league that had a strong November, the Hoosiers are one of the Big Ten's true contenders.

Indiana students didn't wait until the official line began forming Wednesday afternoon. Some spent Tuesday night camped out on a chilly, windy night across the street from Assembly Hall to make sure they'd be among the first into the arena.

Three hours before tipoff, the line wound from the student entrance around the front of Assembly Hall and down the side of Indiana's practice facility with students lined up five or more wide. By the time the game started, almost every seat was filled with a fan wearing a white shirt.

They weren't the only people eager to get in. All 30 NBA teams had representatives at the game.