Louisville's Pegues set for challenge, 'not my first rodeo' 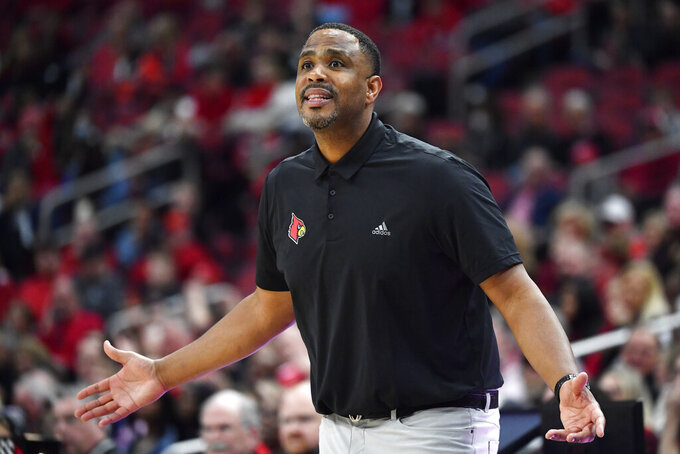 FILE - Louisville interim coach Mike Pegues reacts to a call during the second half of an NCAA college basketball game against Detroit Mercy in Louisville, Ky., Nov. 20, 2021. Pegues fared well in his debut as Louisville’s interim coach, starting this season with a pair of Power 5 victories and a tournament title while Chris Mack was suspended. Pegues’ mission is more critical the second time around as he must salvage the remainder of the Cardinals’ disappointing season. (AP Photo/Timothy D. Easley, File)

A relaxed-looking Mike Pegues said he is ready for the challenge ahead as Louisville’s interim men’s basketball coach, noting Friday with a laugh that “this isn’t my first rodeo” in the position.

Yes, Pegues fared well in his debut as Louisville’s interim coach when he guided the Cardinals to a pair of Power 5 victories and a tournament title to open the season while Chris Mack was suspended.

Pegues’ task is more critical the second time around. He must try to salvage the remainder of the Cardinals’ disappointing season. Chapter Two of his interim tenure begins Saturday against No. 9 Duke and college basketball’s winningest coach, Mike Krzyzewski.

“I can literally say it's not my first rodeo,” Pegues quipped. “I haven't done it for years like the guy I'll be coaching against. He's the GOAT (Greatest Of All Time), I get that. But at least I've done it before, so there's comfortability in that.”

While he has done it on an interim basis, when Pegues was asked if he wanted to be a candidate for the full-time position after a strong finish, he said it would be “great” if that happened but that's not his focus. Louisville interim athletic director Josh Heird has said the will examine all “highly qualified” candidates to fill what he considers a top-10 job.

Pegues was thrust into a second coaching stint after Mack and the school agreed to part ways on Wednesday with the team reeling in a 1-5 slide and 6-8 record since the coach’s return on Dec. 1. Mack's sudden exit with 10 games left was stunning nonetheless, and the Cardinals acknowledged needing time to grasp what happened.

“It was a weird couple of days for sure,” guard Jerrod West said, using the word “frustrated” multiple times. “It was a unique situation I've never been a part of.”

Pegues aims to at least restore stability in Louisville's turbulent season. Co-captain Malik Williams suggested the switch from Mack to Pegues and then back to Mack created difficulty. Pegues believes it left his former boss playing catch-up after returning.

He didn't succeed, and the Cardinals (11-9, 5-5 Atlantic Coast Conference) now must run the table to maintain any hope of reaching the NCAA Tournament.

For Pegues, whose 10 years under Mack included six at Xavier, that means sticking with the up-tempo offensive scheme Louisville has struggled to execute consistently. He also strives to achieve playing the disruptive defense that yielded a Baha Mar Hoops championship in the Bahamas with wins over Mississippi State and Maryland.

“We had a good thing going and we definitely want to get that rhythm back," Pegues said. “But at the end of the day, that’s in the past. This is now. And me assuming the duties of head coach isn’t all of a sudden just going to bring back that November mentality we had.”

Williams said if anyone can re-establish a connection, it's Pegues. The fifth-year senior forward cited his ability to "get under different people's skin" in certain situations and motivate them.

No matter what rotation Pegues uses toward that end, Williams said Louisville must improve in carrying out that plan while there's still time.

“We all just want to be better," he added. "We just want that to change the stigma around this team, how everybody feels about our group. So, we’re just ready to work.”