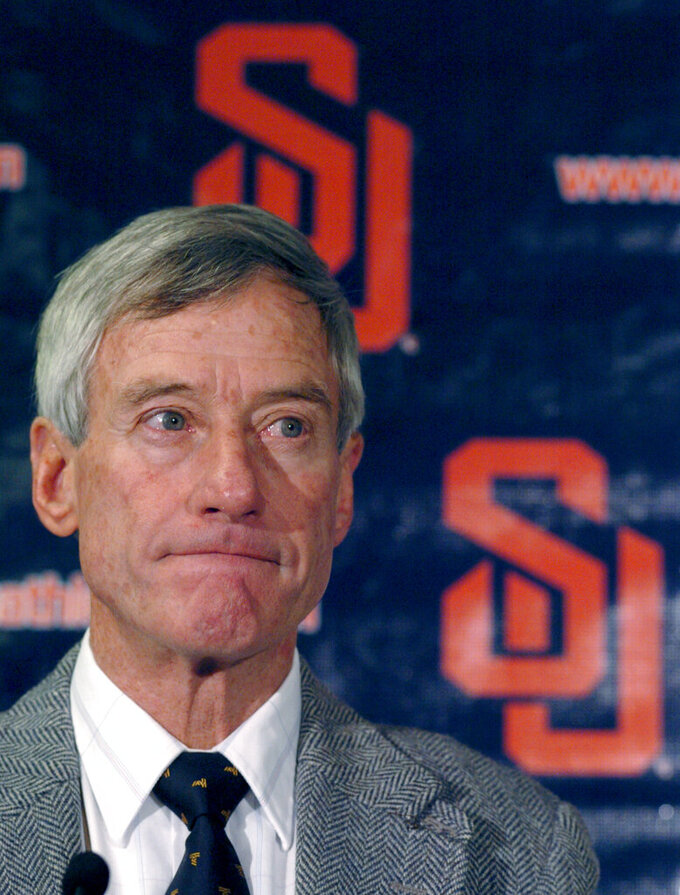 FILE - Jake Crouthamel, athletic director at Syracuse University, announces his retirement during a news conference in Syracuse, N.Y., on Nov. 17, 2004. Crouthamel, a star two-way halfback at Dartmouth in the late 1950s and an accomplished football coach before finding his ultimate niche as athletic director at Syracuse University died Monday, Nov. 7, 2022, in Hanover, N.H., according to the Wendell F. Hartley, Jr. of the Rand-Wilson Funeral Home. He was 84. (John Berry/The Post-Standard via AP, File) 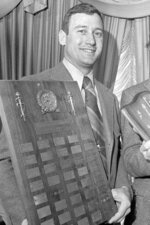 HANOVER, N.H. (AP) — Jake Crouthamel, a star halfback and two-way player at Dartmouth in the late 1950s and an accomplished football coach before finding his ultimate niche as athletic director at Syracuse University has died at 84.

Crouthamel died Monday in Hanover, New Hampshire, according to Wendell F. Hartley, Jr. of the Rand-Wilson Funeral Home there.

Born in 1938 in Perkasie, Pennsylvania, Crouthamel was the Big Green's leading rusher for three seasons and was twice named to the All-Ivy League first team. His career rushing total of 1,763 yards was a school record at the time and still ranks sixth all-time.

Crouthamel was the first player to sign with the expansion Dallas Cowboys in 1960 and the last player cut. He joined the American Football League's Boston Patriots for their inaugural season and then entered the Navy for three years, where he became involved in coaching, leading the Pearl Harbor Naval team to a championship.

He then returned to his alma mater as an assistant to Bob Blackman. When Blackman departed for Illinois, Crouthamel took over from 1971-77. His teams won or shared three Ivy League championships and he was recognized as New England and NCAA District I Coach of the Year in 1973. He left coaching after compiling a 41-20-2 record to become athletic director at Syracuse and left an indelible mark in 27 years.

He was a driving force in the formation of the Big East Conference in 1979. That also was the year the Carrier Dome opened on campus, giving the university a unique indoor sports venue for football, basketball, and lacrosse.

“Jake dedicated his life to intercollegiate athletics and was one of the best and most successful athletics directors of his era,” Syracuse director of athletics John Wildhack said in a statement. “The success of the Orange programs during his tenure speaks to his behind-the-scenes leadership, guidance and expertise.”

After the Syracuse men’s basketball team opened its season with a win Tuesday night, coach Jim Boeheim began his postgame press conference with a tribute to Crouthamel.

“He was one of the great leaders of any place,” Boeheim said. “What he did here, his vision, what he accomplished, I think that’s been overlooked, honestly. He was a great AD. He’s the guy you want to be with if you get into a fight someplace, I can tell you that. There’s not many like him.”

Crouthamel is survived by his wife, Carol, two daughters, and four grandsons.