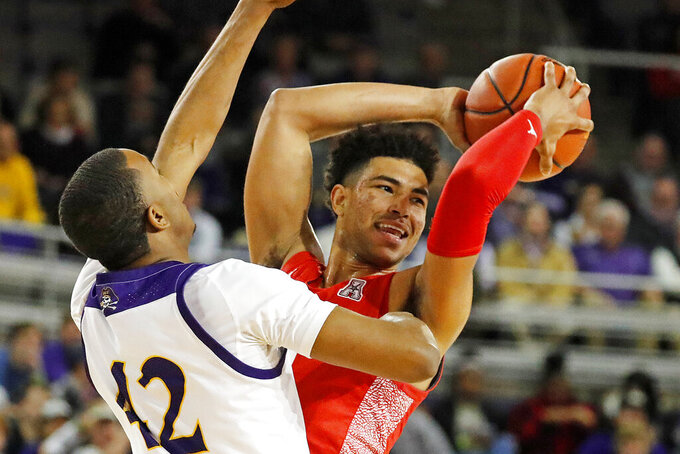 Houston's Quentin Grimes (24) is challenged by East Carolina's Miles James (42) during the first half of an NCAA college basketball game in Greenville, N.C., Wednesday, Jan. 29, 2020. (AP Photo/Karl B DeBlaker)

GREENVILLE, N.C. (AP) — Houston coach Kelvin Sampson had just watched his 21st-ranked Cougars grind through a road win when he ran across East Carolina's Jayden Gardner in the hallway outside his postgame news conference.

The veteran coach couldn't hold back his praise for an opponent who made things difficult on his young team, even after Houston had led by double figures much of the night in a 69-59 win.

“You've got a big heart and you’re a warrior, man,” Sampson told Gardner, patting him on the chest.

The Cougars (17-4, 7-1 American Athletic Conference) won for the 15th time in 17 games Wednesday night, though they struggled all night to slow the 6-foot-7 sophomore and AAC-leading scorer. Gardner finished with 29 points and 19 rebounds.

While Gardner got little help from his teammates, Houston showed some of the balance that has put it atop the AAC standings.

Houston came in with five players averaging between 9.8 and 12.9 points, then got 18 points, five rebounds and a season-high six assists from redshirt freshman Caleb Mills. Kansas transfer Quentin Grimes added 15 points, while Chris Harris Jr. had 10 points and 10 rebounds.

Compare that to the Pirates (9-12, 3-5). Gardner finished with one fewer point than the rest of his teammates, who made 8 of 39 shots (20.5%). And Houston made its move when the Pirates got away from feeding Gardner late in the first half after he had scored 16 points, building a 33-21 lead by the break and never letting ECU closer than eight again.

Houston: The Cougars came in shooting 41% in league play, including 29% from behind the arc. They didn’t do anything to change those numbers Wednesday, shooting 39% and making 5 of 16 3-pointers. More surprising, Houston finished even on the boards (43-all) despite entering the game as the national leader in rebounding margin (10.7). Still, the Cougars beat the Pirates for the ninth straight time after entering the day tied with Tulsa atop the league standings.

“It'’s a road win, it’s hard to win on the road,” Mills said, “but it’s not the way we want to win. We want to outrebound, we want to dominate … That’s not what we did tonight.”

ECU: Gardner has been terrific for the Pirates. He came into the day ranked 13th nationally in scoring and was averaging nearly five full points more than the AAC’s No. 2 scorer (Tulane’s Teshaun Hightower at 16.1 points). But Gardner’s teammates did little to back him up with the Pirates having the chance to match their win total for all of last season.

“We do need to help him more,” Dooley said.

The Cougars won 99-65 here at Minges Coliseum last February in a game that featured multiple technical fouls and ejections — including for Dooley — and a home crowd so irked by officiating that some fans threw trash toward the court.

There were no ugly moments this time. And ECU showed some grit, fighting back from 21 down to within nine in the final minute.

“We're a better team, we compete, we play hard,” Gardner said, adding: "We've just got to keep getting older and keep getting mature and keep going through these games.”