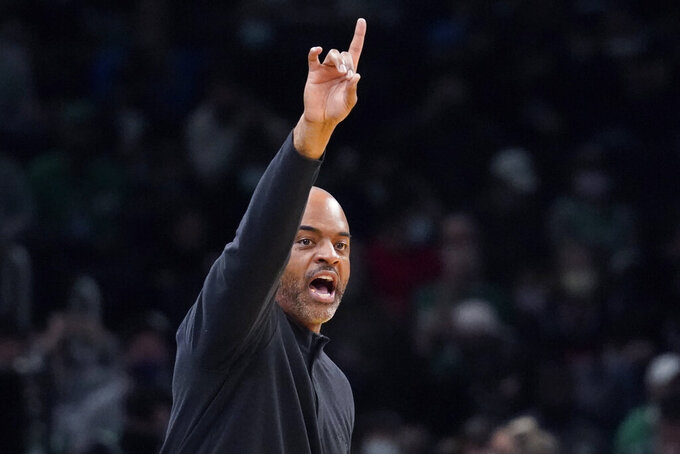 Washington Wizards head coach Wes Unseld Jr. calls to his players during the first half of an NBA basketball game against the Boston Celtics, Wednesday, Oct. 27, 2021, in Boston. (AP Photo/Charles Krupa)

BOSTON (AP) — Montrezl Harrell scored 25 points on 10-of-13 shooting and had 11 rebounds in the Washington Wizards' 116-107 victory over the Boston Celtics on Wednesday night.

Spencer Dinwiddie added 22 points, and Bradley Beal had 17 for the Wizards. They have opened the season 3-1.

Washington center Daniel Gafford had to be helped off the court and was brought straight to the locker room midway into the second quarter and didn’t return. The team he had a right quadriceps contusion.

The 6-foot-10 Gafford collided with Boston forward Jaylen Brown and went to the floor, grabbing his right leg just out of bounds across from Boston’s bench. Brown immediately grabbed his right knee but stayed in the game.

Unlike Boston’s home opener when first-year coach Ime Udoka said the Celtics got “punked” after a 32-point loss to Toronto, Boston rallied after falling behind by 15 points midway into the third quarter.

The Wizards led by one midway into the fourth before going on an 8-0 spree, with Aaron Holiday getting three of the four baskets.

Celtics: C/F Al Horford returned to the lineup after missing the previous game with a left adductor strain. With Horford back and in the starting lineup, guard Dennis Schroder was part of the second unit. … Romeo Langford was out with a strained left calf. … Tatum was whistled for a technical just before halftime.

The scoreboard in the arena had Boston with an extra two points for about three minutes in the final quarter. In fact, it said: Boston 96, Washington 95, until it was changed with just over seven minutes left, taking the two points away.

Tatum rode an exercise bike that was located right next to fans in elevated seating behind a basket off from the Celtics’ bench, trying to stay loose when he came out of the game. At one point, a fan walked down the aisle, put his phone on “selfie” mode and started to take a picture with Tatum in the background but security asked the patron to leave.

Celtics: At Washington on Saturday night.