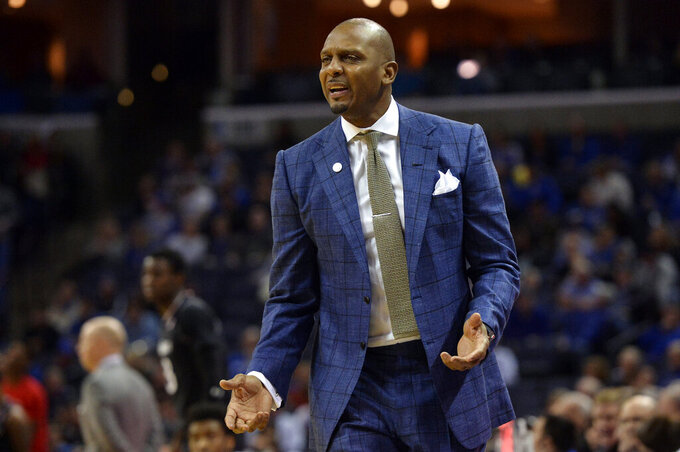 FILE - In this Feb. 7. 2019, file photo, Memphis coach Penny Hardaway reacts during the first half of the team's NCAA college basketball game against Cincinnati in Memphis, Tenn. Hardaway went 22-14 and led the Tigers to an NIT berth in his debut season, but his biggest wins came off the court and on the recruiting trail. Memphis is ranked 14th to start the season and is expected to contend for its first NCAA Tournament berth since 2014. Memphis has the highest preseason ranking of any team that failed to reach the NCAA Tournament last season. (AP Photo/Brandon Dill, File)

Memphis coach Penny Hardaway went 22-14 and led the Tigers to an NIT berth in his debut season. His biggest wins came on the recruiting trail.

That heralded class helps explain why Memphis is ranked 14th to start the season and is expected to contend for its first NCAA Tournament berth since 2014. Memphis has the highest preseason ranking of any team that failed to reach the NCAA Tournament last season.

Hardaway believes the Tigers ought to be ranked even higher.

"Obviously if it were another college, a bigger college, they would be ranked in the top five if they had the No. 1 recruiting class," Hardaway said last month, before the Top 25 was released. "I guess it's just in their minds the inexperience of our staff on this level. But that's up to us, to make it different."

"Experience is the best teacher," Hardaway said. "They're going to get out there, get their feet wet and see what works and what doesn't work. As long as they stay within themselves and listen to us, I think they'll be OK."

Some other teams that missed out on the most recent NCAA Tournament have reason to feel optimistic about their postseason prospects this year.

Arizona had won at least 27 games and reached the NCAA Tournament in six straight seasons before taking a big step backward last year. The Wildcats could return this year as their freshman class includes two top-13 recruits in guards Nico Mannion (9th) and Josh Green (13th). Mannion was a first-team pick and Green was a second-team selection on the preseason all-Pac-12 team. Fifth-year senior Chase Jeter averaged 11.1 points and 6.6 rebounds last season.

Davidson returns its entire starting lineup from a team that finished second in the Atlantic 10 last season. The Wildcats have an exceptional backcourt featuring 2018-19 A-10 player of the year Jon Axel Gudmundsson and Kellan Grady. Gudmundsson averaged 16.9 points, 7.3 rebounds and 4.8 assists last season. Grady had 17.3 points per game a year ago. Other returning starters include KiShawn Pritchett, Luke Frampton and Luka Brajkovic.

Harvard won the Ivy League regular-season title last year but settled for an NIT bid after losing to Yale in the league tournament championship game. Bryce Aiken scored 38 points in that loss to Yale and is back for his senior year after averaging 22.2 points last season. Harvard also returns 2017-18 Ivy player of the year Seth Towns, who missed the entire 2018-19 season with a knee injury.

Consider this a leap of faith that the Illini will make a major jump in Brad Underwood's third season as coach. Illinois hasn't reached the NCAA Tournament since 2013 and is the only team on this list that finished below .500 last season, but the Illini return eight of their top nine scorers from a year ago. That list includes guards Ayo Dosunmu (13.8 ppg last season) and Trent Frazier (13.7) as well as forward Giorgi Bezhanishvili (12.5). Illinois also welcomes 7-foot freshman Kofi Cockburn, who was ranked 46th nationally in the 247Sports Composite.