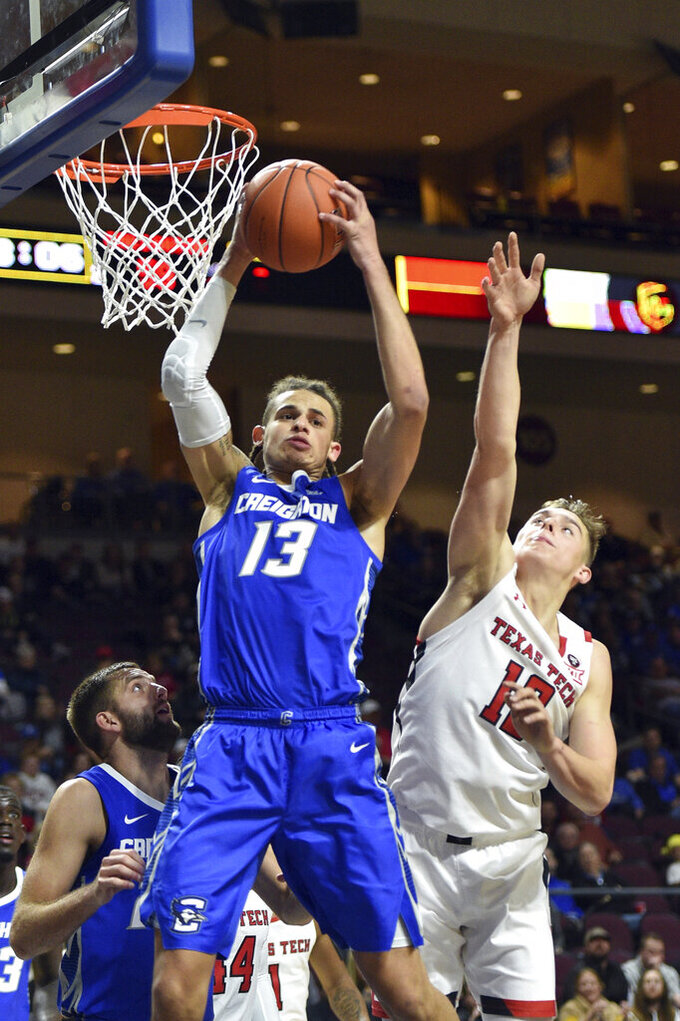 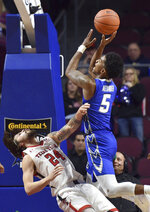 LAS VEGAS (AP) — Marcus Zegarowski followed one of the worst performances of his career with one of his best.

Zegarowski scored a career-high 32 points on 12-for-18 shooting, and Creighton beat No. 12 Texas Tech 83-76 in overtime on Friday night.

Zegarowski also had five assists and two steals. The sophomore guard had seven points on 3-for-16 shooting in Thursday night’s 83-52 loss to San Diego State.

“There will be a game I go 1 for 20 and there will be game I go 8 for 10. That’s how basketball is,” he said. “My teammates and my coaches give me a lot of confidence. I play with a lot of great teammates on and off the floor. It makes my job a lot easier.”

Ty-Shon Alexander had 18 points and 12 rebounds for Creighton (5-2) in the consolation game of the Las Vegas Invitational. Christian Bishop added nine points and eight boards.

Texas Tech trailed Creighton 74-66 with 2:45 left in regulation, but forced overtime with an 8-0 run. Clarke tied with a layup with 33 seconds remaining.

The Bluejays then scored the first six points in the extra session. Alexander, who injured his right leg with 11 minutes left in regulation, made three fouls shots in the final seconds to help close it out.

“We were running on fumes, we were playing with a short bench, just like Texas Tech,” Creighton coach Greg McDermott said. “When we’re going back-to-back nights, it’s not easy. I thought our guys showed a lot resolve in overtime. It’s a good win for us. Texas Tech is a good team.”

“Chris played with a lot of courage this weekend,” Beard said. “He was best our rebounder and best assist person on the stats tonight. He plays with poise out there. He can tell you — he can get better. He’s playing at a high, high level. He was one of the positives this weekend”

In the final seconds of regulation, Alexander turned the ball over near midcourt and Moretti had the ball going the other way. While trying to take a shot just inside the mid-court line, he might have been fouled, but the referees did not call one.

“I thought (Moretti) got fouled,” Beard said. “I had a pretty good view of it, but I’m not an official. I respect those guys. Those are tough calls in the heat of the moment.”

Creighton: Thursday night’s loss to San Diego State snapped a six-game winning streak by the Bluejays in Las Vegas. Creighton had won the Las Vegas Classic in 2008 and Las Vegas Invitational in 2012. The loss was their first here since 1987. Christian Bishop and Damien Jefferson each had nine points.

Texas Tech: Jahmi’us Ramsey was held out because of a hamstring injury. He is day to day.