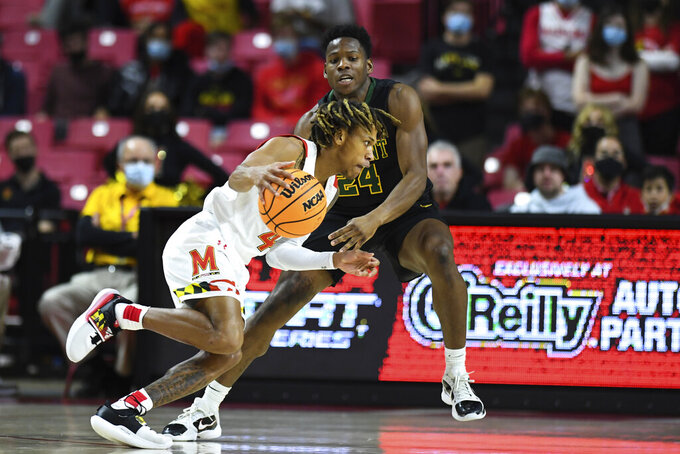 Ben Shungu scored a career-high 27 points and Isaiah Powell added 14 points and 11 rebounds for the Catamounts (1-1), who have not defeated a Big Ten team since 1977.

Maryland is off to a 3-0 start for the eighth consecutive season after allowing just eight points in the final 8:57.

“I’ve been doing this a long time, and that last 10 minutes was as good as one of my teams has ever played defensively,” Maryland coach Mark Turgeon said. “I’ve had a lot of good defensive teams, and that was something else.”

The Terrapins trailed by nine in the first half and 39-32 early in the second before Ian Martinez’s 3-pointer finished a 12-2 run that gave them the lead for good with 12:48 left.

Maryland struggled to fully put away Vermont until late. Ayala and Russell combined for nine points during a 10-0 run in the final minutes to push the lead to 13.

Shungu scored 20 points in the first half, including a pair of 3-pointers in the final minute to give the Catamounts a 36-32 lead at the break.

“He got going in the first half,” Ayala said. “I came in at halftime and was telling the guys, ‘If we stop him, we win the game.’ He had most of their points in the first half and I think he got tired. In the second half, we were wearing him down.”

Maryland also went with a somewhat smaller lineup, as center Qudus Wahab played only eight scoreless minutes after the break.

That had a trickle-down effect of allowing the Terps to repeatedly switch defenders on to Shungu.

“They were really building a wall in transition against Benny, and even in the halfcourt they had guys one pass away that were really squeezed in on him and made everything difficult for him,” Vermont coach John Becker said.

Vermont forward Ryan Davis had eight points on 3-of-12 shooting. Davis was last season’s America East player of the year but missed the Catamounts’ opening victory Thursday at Northern Iowa.

Vermont: The Catamounts are a perennial contender in the America East, and Saturday’s result suggests that will be the case again this season. Vermont’s remaining game against a power conference team is Dec. 7 at Providence.

Maryland: Much like in Thursday’s 71-64 win over George Washington, the Terps were not at their best but managed to earn a victory. Perimeter shooting is an obvious concern; Maryland is 9 of 47 from 3-point range over the last two games.

With few upsets in the bottom half of the Top 25 this week, Maryland shouldn’t move much when Monday’s poll is released.

Maryland freshman forward James Graham III remained suspended for a violation of team rules and missed his second game in a row. Turgeon said he had not met with Graham since before Thursday’s game.

“We just had too much going in between,” Turgeon said. “I’ll meet with James on Monday and we’ll see where it goes from there.”

Graham, who enrolled in the middle of last season and averaged 1.3 points in eight games, had two points and a rebound in five minutes of Tuesday’s season opener against Quinnipiac.

Vermont will try to extend its winning streak in home openers to eight Tuesday against Division III Worcester Polytechnic Institute.

Maryland continues its opening five-game homestand Wednesday against George Mason. The Terps are 9-0 all-time against the Patriots.