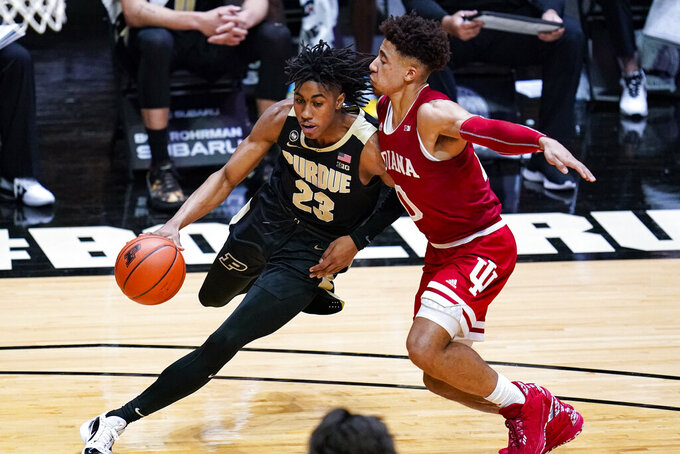 His mother, Niele, led Notre Dame to the first of its two national championships and now coaches at her alma mater. His father, Javin Hunter, played for the Fighting Irish and in the NFL. The younger Ivey was a highly-touted high school star, too.

So when he got to Purdue last fall and started making an impact with three other talented freshmen, Ivey had a pretty good sense of what would happen next. Yes, fans started talking about The Baby Boilers, Part 2, the sequel to Purdue's incredible freshmen in 2007-08.

Only they hope to edit the final scene with one, long run at an NCAA Tournament being played exclusively in Indiana.

“I packed a lot," Ivey said after finding out the fourth-seeded Boilermakers would face 13th-seeded North Texas on Friday in the South Region. “I packed my whole suitcase. I packed everything because I'm planning to stay 'til April."

The Boilermakers (18-9) have been one of the Big Ten's hottest teams since January, going 11-4, winning six of their last seven and jumping to No. 20 in the AP Top 25 despite last week's overtime loss to No. 9 Ohio State in the league tourney. And they're only Indiana school still playing, too.

One reason, they've got an experienced cast playing lead roles. All-conference forward Trevion Williams, a junior, averages 14.9 points and 9.6 rebounds. Senior guard Sasha Stefanovic was one of the league's top 3-point shooters and has returned following a positive COVID-19 test forced him to miss three weeks.

The four freshmen in the supporting cast is pretty strong, too: Ivey, Zach Edey, Mason Gillis and Brandon Newman. Each possesses a different skill set and presents a distinct challenge for defenders.

Ivey is the athletic, 6-foot-4 playmaking guard who can score in bunches. He averages just 10.5 points but has scored at least 14 in nine of Purdue's last 11 games.

Gillis and Newman both redshirted last season. But at 6-6, 230 pounds, Gillis is the tough guy who enjoys mixing it up inside and the 6-5 Newman can handle the ball, make 3-pointers and defend.

Edey is the most unique.

The long-armed, 7-foot-4, 285-pound Toronto native gave up pitching to pursue basketball and may be the most talented center in a long line that have come through coach Matt Painter's program. He averaged 10.2 points, 5.4 rebounds and 1.3 blocks in one of the country's most rugged leagues, becoming a big hit around campus and a big headache for defenders because he makes players of all sizes look small.

All four earned Big Ten freshmen of the week honors this season, a league record for one school. Edey and Ivey became the ninth set of Big Ten teammates to earn all-freshmen honors.

They're a confident bunch, too.

Like the original Baby Boilers in 2008 — Robbie Hummel, E'Twaun Moore, JaJuan Johnson and Scott Martin — Purdue played well enough to contend for a Big Ten title but fell short in the regular-season and the tournament.

Now, though, they have a chance to change the script from 13 years ago when Hummel, Moore & Co. beat Baylor in the first round and lost to Xavier in the second. This time, Purdue is playing for state pride and to prove this year's finale can be better than the original.

“Obviously, being from Indiana, this is amazing just to have the whole tournament in Indiana, having family here that can make the games," Ivey said. “But this is for pride, man, being the only in-state school in the tournament. This is for pride and to show people what they’re missing out on. I'm going to be very locked in once we step on the court. I know where we want to go and I know where we want to end up."