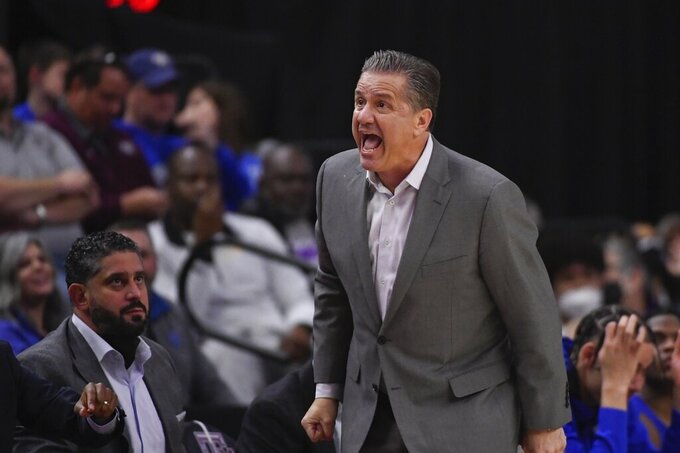 Kentucky coach John Calipari reacts to a foul called against Kentucky during the second half of the team's NCAA college basketball game against Texas A&M on Wednesday, Jan. 19, 2022, in College Station, Texas. (AP Photo/Justin Rex)

No. 12 Kentucky(16-4) visits fifth-ranked Kansas (17-2) to highlight a Southeastern Conference slate that's mostly comprised of games in the Big 12/SEC Challenge. Kentucky rebounded from a loss to No. 1 Auburn with an overtime victory over Mississippi State despite playing without injured guard TyTy Washington (left ankle). The Wildcats are led by rebounding machine Oscar Tshiebwe. Kansas's last three games have each been three-point wins, including a 94-91, double-overtime victory over No. 13 Texas Tech Monday night when Ochai Agbaji scored a career-high 37 points. Kansas is 9-0 at Allen Fieldhouse. The other marquee matchup comes when Auburn (19-1) hosts Oklahoma (13-7) after eking out a 55-54 win over Missouri in the program's first game as the top-ranked team. The Tigers have won 16 straight. Fourth-ranked Baylor visits an Alabama team that has fallen from the Top 25.

Oscar Tshiebwe, Kentucky. The nation's top rebounder had 21 points and 22 rebounds against Mississippi State. Tshiebwe is averaging 16.3 points and 15.2 rebounds. The 6-foot-9, 255-pounder, a West Virginia transfer, has collected at least 12 rebounds in seven straight games and grabbed 28 against Western Kentucky in December.

Kentucky's John Calipari reached career win No. 800 with a victory over Mississippi State, just six shy of Eddie Sutton in the 10th spot among Division I coaches. Calipari reached that milestone in 1,037 games, needing fewer than every coach except Adolph Rupp (972), Roy Williams (1,012) and Dean Smith (1,029). ... Tennessee overcame a 13-point deficit to beat Florida 78-71, its largest comeback since rallying from a 17-point deficit at Kentucky on March 3, 2020. ... Arkansas has held five straight opponents below 40% shooting for the first time since joining the SEC, helping fuel a five-game win streak. ... No. 18 LSU outscored Texas A&M 13-2 over the final 3:34, winning 70-64 with three players sidelined by the end. It stopped a three-game losing streak.

No. 24 Mississippi finishes off a brutal week's schedule after entering the rankings for the first time since January 2007. The Rebels, who visited No. 1 South Carolina Thursday night, now host 15th-ranked Georgia on Sunday. South Carolina won 69-40. ... No. 4 Tennessee will have to play the rest of the season without center Keyen Green, who tore an ACL in last weekend's win over Georgia. The Lady Vols don't play until Monday.