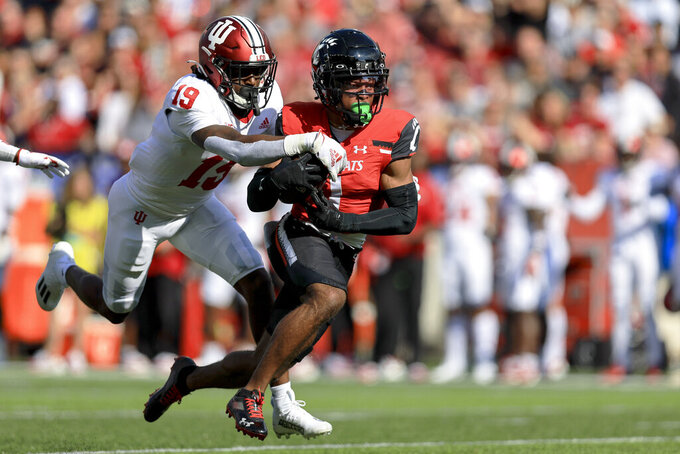 CINCINNATI (AP) — Ben Bryant passed for 314 of his 354 yards in the first half with a career-high four touchdowns, and Tyler Scott had career-highs with 185 receiving yards and three TDs, as Cincinnati defeated Indiana 45-24 on Saturday.

“It didn't feel as good afterward as the score might indicate,” said Bearcats head coach Luke Fickell. “This is a team that still needs to do a good job of finishing. But it's another opportunity to learn and grow. This is a good football team.”

Byron Threats' first career interception and a 28-yard return gave Cincinnati first-and-goal at the six. The Bearcats settled for a 24-yard field goal by Ryan Coe to go ahead 3-0.

On the Bearcats' first play from scrimmage after the Hoosiers tied the score with a field goal, Bryant found Scott wide open for a 75-yard touchdown making the score 10-3. It was the longest pass play for the Bearcats since Scott's 81-yard TD against Miami (OH) last season.

Bryant's 5-yard TD pass to Tre Tucker made the score 17-3 early in the second quarter.

“He did a good job spreading things around,” Fickell said. “He's going to take what's given to him. We continue to focus on Ben's strengths.”

The Hoosiers (3-1) answered back on Connor Bazelak's 19-yard TD pass to senior running back Josh Henderson, but Bryant's second TD pass to Scott put Cincinnati ahead 24-10 with 4:33 left in the first half.

Bazelak completed 31 of a school-record 66 pass attempts for 280 yards and two TDs with two interceptions. Shaun Shivers rushed for 79 yards and a TD.

Bryant was 17 of 21 passing for 314 yards and four touchdowns in the first half. It was the most passing yards for a Bearcats QB in the first half since Gunner Kiel had 302 against Houston in 2015.

“I'm really nit-picky on myself and the offense,” Bryant said. “We preach starting strong, but we have to get better.”

Scott had three touchdown receptions in the first half giving him 10 for his career, all for more than 20 yards. It's the first time in program history that a Bearcats player had three TD catches in a half.

“The coaching staff has really trusted in me,” said Scott, who played running back in high school. “The trust between Ben (Bryant) and I gets better every week. We talk after every play. It's been great.”

Just before halftime, redshirt sophomore nose tackle Dominique Perry who scooped up a Bazelak fumble forced by Eric Phillips and returned it 14 yards for a touchdown to give the Bearcats a 38-10 lead at halftime. It was Perry's first game after missing the previous three due to injury.

Shivers' career-long 47-yard TD run cut Cincinnati's lead to 38-24 with 14:01 remaining. But the Hoosiers wouldn't get any closer.

“Our defense let us down in the first half,” said IU head coach Tom Allen. "We stopped the run today. We have to stop the pass. We weren’t consistent in our execution. It snowballed on us. We’re still struggling to get off to a fast start.”

Cincinnati: Fickell has been urging Bryant to take more chances downfield and get the ball in the hands of his playmakers. He did that on Saturday with TD passes of 75, 34, and 32 yards. Bryant averaged 14 yards per completion.

Throwing the ball 66 times and completing 31 isn't a recipe for success. But trailing by 28 points at halftime, and Cincinnati's defensive scheme, forced the Hoosiers' hand. “We knew coming in we would have to throw the ball over their heads,” Bazelak said. "Credit to them. They did a good job stopping us.”

The Bearcats offense went dormant in the second half with an interception, six punts, and a failed fourth-down on their first eight possessions. They had four first downs and 71 total yards after halftime, and only 30 rushing yards on the day. “In the second half, they loaded things up," Fickell said. "They have some big guys up front and we couldn't get to the second level.”

Indiana: At Nebraska next Saturday.

Cincinnati: At Tulsa next Saturday.