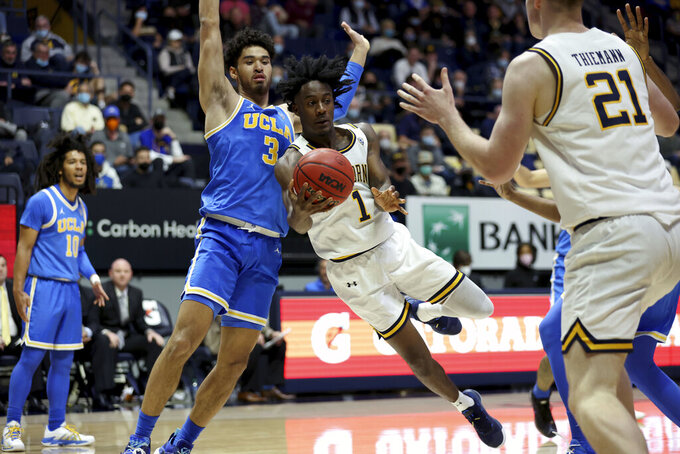 BERKELEY, Calif. (AP) — Tyger Campbell scored 17 points, Johnny Juzang made a clutch 3-pointer late despite his worst shooting performance of the season, and No. 5 UCLA beat California 60-52 on Saturday night.

Jaime Jaquez Jr. added 14 points as the Bruins (10-1, 2-0 Pac-12) made a victorious return to conference play after missing nearly a month due to COVID-19 issues.

“It felt like we’re starting over, to be honest with you, with such a big break,” UCLA coach Mike Cronin said. “I knew we were going to take Cal’s best shot because I know what (coach) Mark Fox is made of. We told our guys we were going to probably have to grind it out.”

The Bruins were outrebounded and limited to four 3-pointers but pulled away behind a defense that held the Golden Bears to eight points over the final nine minutes.

“We got points in transition and we were able to play off that and create things,” said Campbell, who had three of the Bruins’ 10 steals. “Coach likes to turn our defense into offense so that was good for us. It works for us because nights like tonight we didn’t shoot the best on offense and our defense kept them to under 60. It’s good to fall back on.”

Juzang, UCLA’s leading scorer and a preseason All-American, missed six of his first seven shots but drained a 3-pointer to put the Bruins ahead 55-43. Juzang had reached double figures in 17 consecutive games dating to last season, but finished Saturday with nine points.

Andre Kelly had 22 points and six rebounds for California. The Bears (9-7, 2-3) have lost nine straight against their intrastate rivals.

“We did a lot of things to give us a chance throughout the game, but against the best you have to be a little better than we were tonight,” Fox said. “We can probably point to four or five small, little mistakes in the game that ended up being the difference. Just being a little more consistent across the board, I think, would help get us over the hump.”

UCLA methodically pulled away in the second half after the Bruins missed their first six shots coming out of halftime.

Juzang put UCLA ahead 49-39 after Cody Riley intercepted a pass by Grant Anticevich and fed it to Campbell, who found Juzang under the basket for the layup. Campbell followed with a 3-pointer to make it 52-39.

Campbell and Jaquez keyed a 15-5 run late in the first half. Campbell aggressively attacked the basket and spun around defenders to score while Jaquez powered in from down low to help the Bruins lead 31-25.

WORKING HIS WAY BACK

Riley had nine points, five rebounds and a team-high four steals in his second game back after missing UCLA’s first nine with a meniscus injury in his left knee.

A PLAY TO REMEMBER

Shepherd made a terrific defensive play to get a block from behind on Juzang’s attempt in the key, then took the ball the other way and scored to pull Cal within 31-29 early in the second half.

UCLA: The Bruins had to overcome early problems on the board and a hit-and-miss offense that sputtered early. But Cronin’s team stuck to its defensive principles and improved to 22-3 over the last two seasons when holding opponents to 70 points or fewer. UCLA has won four straight since its only loss of the season against then-No. 1 Gonzaga in November.

California: The Bears have dropped back-to-back home games after winning their previous nine at Haas Pavilion. Fox’s team has shown distinct improvements on defensive this season and proved it by holding the Pac-12’s top 3-point shooting team to 4 of 18 beyond the arc. The problem continues to be inconsistencies on offense.

California: At Washington on Wednesday.