Fresh to Baylor, Sochan and Brown big for defending champs 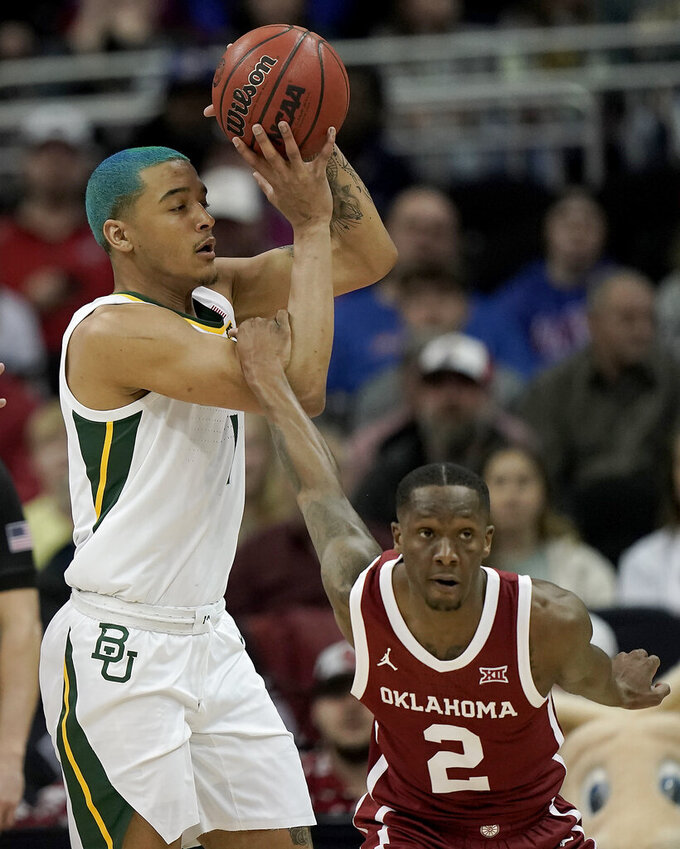 Baylor forward Jeremy Sochan, left, shoots under pressure from Oklahoma guard Umoja Gibson (2) during the first half of an NCAA college basketball game in the quarterfinal round of the Big 12 Conference tournament in Kansas City, Mo., Thursday, March 10, 2022. (AP Photo/Charlie Riedel)

Kendall Brown was a five-star recruit whose dad is a former Harlem Globetrotters player. Jeremy Sochan was born in Oklahoma, grew up in England and has played basketball in Poland and Germany.

The true freshmen are now roommates at Baylor and have played significant roles in the defending national champion Bears being a No. 1 seed again and winning another Big 12 title, even with only one returning starter.

“They want to win and they’re high-level athletes, and high-level people as well,” said second-team All-Big 12 guard Adam Flagler, who is a starter this season after coming off the bench in 28 games last season. “We kind of expected that over time they would get to this point, and they have so much more to show.”

Brown and Sochan will be on the biggest stage, the NCAA Tournament, with the fourth-ranked Bears trying to become the first team to win back-to-back national championships since Florida in 2006 and 2007.

“Just getting here with all the new guys, a lot of great pieces and starting off really hot, and we just kept going, and now our expectations are set for a back-to-back," said Brown, whose dad, Courtney “The Iceman” Brown, was a member of the Globetrotters from 1990-94.

The Bears (26-6) have to travel fewer than 100 miles for their first-round NCAA East Region game Thursday against Norfolk State in Fort Worth, Texas.

Sochan watched the end of Baylor's national championship victory over Gonzaga in April — it was about 4 a.m. in Germany. He had already signed with the Bears, and knew there would be significant roster turnover.

“I came in with a growth mindset and the mindset to work hard and see what happens,” Sochan said. “I’ve always felt I could come into a team and impact from the start. So I did really expect that, and that’s what the outcome has been fortunately.”

Senior post Flo Thamba and Brown are the only players who have played (and started) every game this season, with the 6-foot-8 Brown averaging 10 points and 4.9 rebounds a game while shooting 59.5% from the field. Thamba was the only returning starter from the title team that featured the talented trio of selfless guards All-American Jared Butler, Davion Mitchell and MaCio Teague.

Big 12 coaches voted Sochan as the league’s best sixth man. Versatile like his varying hairstyles, the 6-9 Sochan can play any of the five positions on the floor. He is 10th in the Big 12 with 6.2 rebounds a game, with 8.8 points, in about 25 minutes a game.

“These two dudes are a big part of our success. In order for us to win, we need them to be stars like they are,” said All-Big 12 guard James Akinjo, a graduate transfer from Arizona going into his first NCAA Tournament. “I think everybody in the country knows these two are NBA-talent players, and I think through the course of the season they solidified that.”

The Bears started this season 15-0, extending their overall winning streak to 21 games after the six-game sweep through last year’s NCAA Tournament. Their first two losses came in consecutive home games in January, the first of four games Sochan missed because of a left ankle injury.

“We all really clicked early on and just knowing our roles early on, we really knew that we can make a push in March for a championship,” Brown said.

Sochan speaks with a British accent, and his Polish-born mother — who also was a player — coached him as a kid to be aggressive and use his skills. He played his senior year of high school in Germany, and last year became the youngest member of the Polish men’s national team.

Poland is on the border of Ukraine, so in last week’s Big 12 Tournament he colored his hair blue, one of the two colors of the Ukrainian flag. He wore messages on his warmup shirt and shoes of support for the nation at war with invading Russia.

“I think we’re all connected in some way. What’s happening isn’t right,” Sochan said. “Just showing some awareness with whatever I can do.”