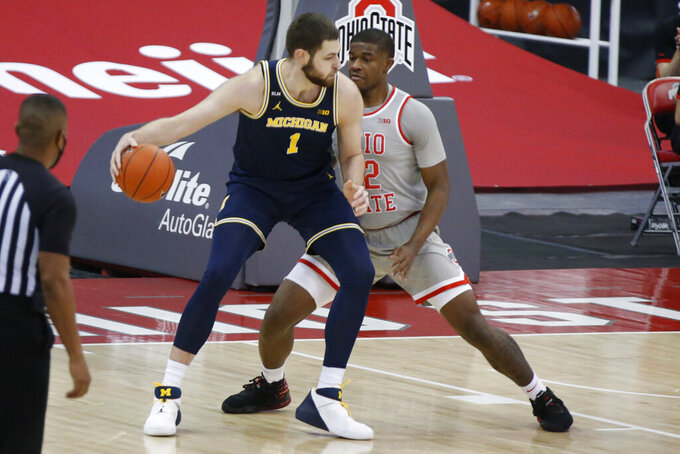 ANN ARBOR, Mich. (AP) — Once Hunter Dickinson established himself as one of the top freshmen in the country, this became a matchup to look forward to.

It's finally here: Dickinson and No. 3 Michigan against Luka Garza and No. 9 Iowa. A battle between two of college basketball's top big men — who are both from the Washington, D.C. area and have known each other for years.

“It’s really impressive to see what he’s done so far, but I think anybody from the DMV would have told you that that was going to happen," Garza said about his younger counterpart. "He’s been very elite for a while.”

The Big Ten-leading Wolverines (16-1, 11-1) host Thursday night's matchup, and the 7-foot-1 Dickinson is a big reason why they're in this position. He's already been Big Ten freshmen of the week seven times. A 20-year-old freshman who played high school basketball at DeMatha, Dickinson leads Michigan with 15 points and 7.8 rebounds per game.

Garza, who played high school basketball at Maret, is a couple years older than Dickinson, but they've known each other for a while and have worked out together.

“He’s been playing at a very high level of basketball for a while now," Garza said. "He’s mature beyond his years, because of him playing at that level.”

This matchup may feel like a bit of a throwback. Garza has made 32 3-pointers this season, but Dickinson hasn't made any, and this game could come down to how well these two big men deal with each other around the basket. Garza scored 44 points at Michigan in a game last season, although the Hawkeyes still lost.

“I think something that he does really well is use his body. He’s got a big frame that he throws around really well," Dickinson said. "He’s really good at using angles. If you give him any type of angle to get it off the backboard or something like that, he’s really good.”

Although Dickinson and Garza have both had success in the Big Ten this season, that doesn't mean they've been in touch that often.

“During the season it's hard. I don't really text anybody from anywhere else, other than my teammates," Dickinson said. "I've got to probably try to do better of reaching out to my friends and stuff like that. ... It's usually just me being a competitor. I don't want to talk to my opponents too much.”

They'll see plenty of each other Thursday night, though, in the only scheduled meeting between these teams this season.

“I think he’s a really, really good player,” Garza said. “He’s been that way since he was young. He knows how to score the ball, and he’s terrific down there.”