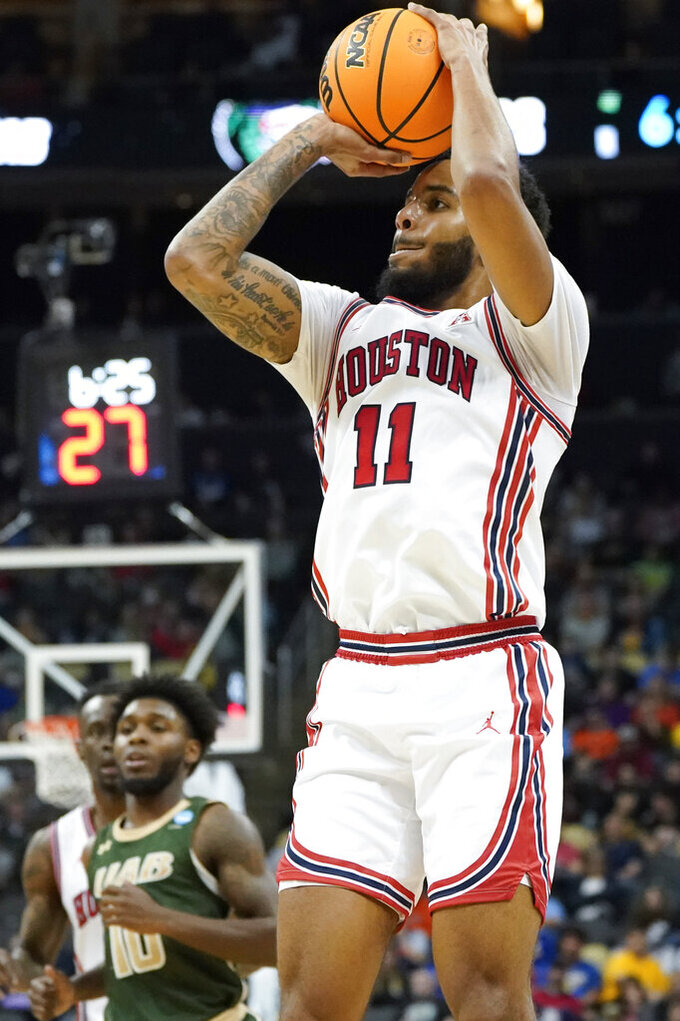 Houston's Kyler Edwards (11) prepares to shoot a 3-point basket in front of UAB's Jordan Walker (10) during the first half of a college basketball game in the first round of the NCAA tournament, Friday, March 18, 2022, in Pittsburgh. (AP Photo/Keith Srakocic) 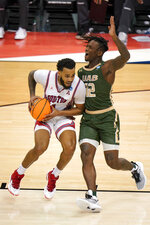 PITTSBURGH (AP) — As Houston's players went through pregame warmups before discarding UAB without much trouble in their first-round South Region matchup, Cougars senior Kyler Edwards had the look of someone who had been here before.

It all was so familiar to Edwards. The blaring pep bands. The pressure. The spotlight.

March's maddening stage, filled with momentum swings, upsets, heroes and heartache, is something of a second home for Edwards, who knows his way around the ubiquitous NCAA logos — and around the brackets.

Friday's game was Edwards' ninth in the NCAA Tournament, and along the way he has gained both invaluable experience and important intelligence for the Cougars (30-5), who take on Illinois (23-9) on Sunday for a Sweet 16 spot.

“It gives me a lot of confidence to know what I’m doing out there on the court,” Edwards said Saturday following Houston's closed practice at PPG Paints Arena. “And I just feel like I’m a veteran out there so I can know when to make the right plays, know when to do certain things. The experience helps me out a lot.”

Edwards transferred to Houston after playing three seasons at Texas Tech. As a freshman, he got all the way to the national title game and scored 12 points in the Red Raiders' loss to Virginia.

Frustrated by less playing time as a junior, Edwards followed Texas Tech coach Chris Beard's decision to leave Texas with one of his own. He entered the transfer portal and wound up at Houston, which made the Final Four in 2021.

And if the Cougars' well-rounded performance against UAB is any indication, Houston might be able to extend its season into April's first weekend again.

Edwards did a little bit of everything during the 82-68 win over the Blazers, the Cougars' ninth victory by at least 10 points in the past 11 games. He scored 25 points, 18 on 3-pointers, and added seven rebounds in 37 minutes.

Whenever UAB made a run, Edwards was usually the one who countered. With the Blazers still pushing hard in the waning moments, it was Edwards who effectively dashed any comeback hopes with a layup and 3-pointer in the final minute.

On to the next one.

But beyond his solid stat line, it was Edwards who talked some of his younger teammates through their first NCAA adventure.

For Houston coach Kelvin Sampson, having Edwards on the floor is comforting for his staff and players.

“We’re playing three freshmen a lot of minutes,” Sampson said. “We have a 19-year-old freshman point guard in Jamal Shead that Kyler is probably his best friend who he spends most of his time with on the team. I think it’s comforting for Jamal to lean on him.”

Sampson, too, has had to lean on Edwards.

Like most teams, the Cougars have dealt with their share of adversity. However, Houston's was pretty extreme as starters Tramon Mark and Marcus Sasser, holdovers from the Final Four squad and the team's best players, suffered season-ending injuries in December.

Those losses forced Sampson, now in his eighth season at Houston, to change his plans. It caused Edwards to raise his game.

The sturdy 6-foot-4 guard responded with a three-game tear in January, scoring 29, 23 and 25 points while shooting 19 for 37 on 3-pointers. The stretch raised his profile in the American Athletic Conference and also strengthened his teammates' faith in him.

“He’s very humble, kind of a quiet leader on the team," Sampson said. "Our kids respect him a lot, so I think that’s very valuable for our players.”

Edwards is one of three transfers on Houston making a major impact. The others, swingman Taze Moore, who played at Cal-Bakersfield, and forward Josh Carlton, who came over from Connecticut, also have contributed on a team that shook off back-to-back losses — Houston's first consecutive losses in five years — in early February to go on their current run.

It's gotten the Cougars to Sunday and a matchup against the Fighting Illini and their massive All-American center Kofi Cockburn, the closest thing college basketball has had to Hall of Famer Shaquille O'Neal in years.

“Kofi's a big man now,” Sampson said. “Kofi's a lot closer to Shaq than he is guys we play against. That dude can block out the sun. He’s wide."

Edwards has taken on some big boys in the tournament before, and after what Houston has dealt with this season, what's another big obstacle?