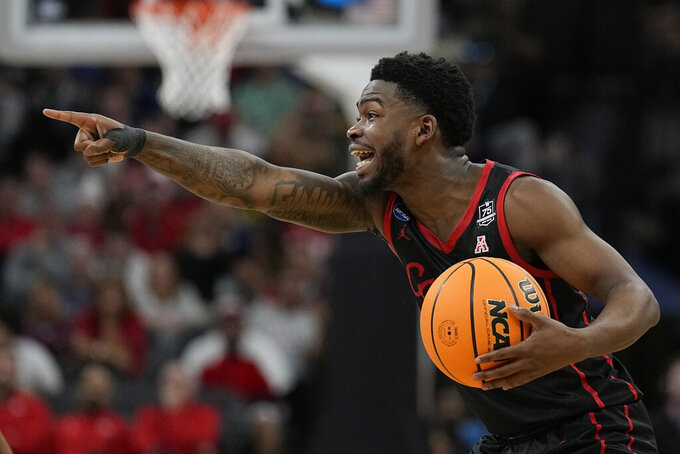 Houston guard Jamal Shead yells during the first half of a college basketball game against Arizona in the Sweet 16 round of the NCAA tournament on Thursday, March 24, 2022, in San Antonio. (AP Photo/Eric Gay)

SAN ANTONIO (AP) — Taze Moore was a player Houston coach Kelvin Sampson didn't even know. Jamal Shead was too young and inexperienced to be expected to make such an impact.

Now they are part of a completely revamped starting lineup that is trying to get the Cougars (32-5) into consecutive Final Fours for the first time since 1982-84 in the Phi Slama Jama era, long before any of the current players were born.

Sampson has had to replace his entire starting five since Houston's loss to eventual champ Baylor in a national semifinal last year. Nonetheless, these fifth-seeded Cougars play No. 2 seed Villanova (29-7) in the South Region championship game Saturday.

“We’ve got a lot of older guys. We've got a lot of experience,” fifth-year senior forward Fabian White Jr. said. “We just stay solid really. I think as a team we just bonded really, especially over the offseason. ... We just stick together through adversity really.”

The starters for Houston, which never trailed in a 72-60 win over top-seeded Arizona in the Sweet 16, are second-year guard Shead, Cal State Bakersfield transfer Moore, two other senior newcomers (guard Kyler Edwards and post Josh Carlton) and White, who had started a handful of games before this season.

“I think last year’s team focused more on just strictly guards scoring a lot more,” Shead said. “It’s a totally different atmosphere, but the culture stays the same. We still play as hard as we do. We still play defense as much as we can. And I think everybody just feeds off of each other, just like last year’s team.”

Villanova won the 2018 national championship in San Antonio, at the Alamodome about three miles from AT&T Center, and won the 2016 title about 200 miles away in Houston. The Big East champion Wildcats beat Michigan 63-55 on Thursday night, and now have to beat the local favorite to get to their seventh Final Four.

“We’re expecting a road game. What’s funny, we really didn’t think — you know, you think about it one game at a time, and we never thought about it until I started watching that game last night when our game was over,” Villanova coach Jay Wright said. “Then it hit me. Like, ‘Wow, we’re in for it, man.’ They’re going to have a great following here.”

Sampson recalled Shead arriving on campus two years ago when he was only 17. Shead got limited action on a team filled with talented guards his first season. This season could have been similar before Sasser and Mark got hurt.

"He’s kind of thrust into a major role early. He just had to get better,” Sampson said. “He has some older guys around him to help nurture him. That was important. Then once he found his way, he got his wings, he started flying. ... Jamal has grown up, and this team has grown up with him.”

Edwards and Carlton had already committed to Houston last spring before the Cougars found Moore in the transfer portal to fill out their roster. Moore scored a season-high 21 points in the Cougars' second-round win over Illinois.

“I had no idea who he was. ... Taze just kind of popped out of nowhere," Sampson said. “Taze is a Mississippi kid, humble, down to earth, courteous, respectful, nice, great teammate. It’s been a blessing to have him in our program. Sometimes you’ve got to get lucky. We didn’t make him the kind of kid he was. We got that when we recruited him.”

There was a moment in Villanova’s regional semifinal victory when senior guard Collin Gillespie’s left knee was bent awkwardly on the floor with a Michigan player on top of his leg while they went for a loose ball.

Gillespie, who missed the NCAA Tournament last season because of a torn MCL in that knee, grimaced when he got up and walked off the contact. And he played all but one minute in the victory over the Wolverines.

“There’s no doubt. I trust in my surgeon and everything that he did for me. So it’s stable,” Gillespie said Friday. “It’s just one of those things where, if you get hit, it feels a little uncomfortable, but I’m fine now. I feel good.”

Sampson said older reporters are the people who talk about Phi Slama Jama, an era for Houston basketball he says has no impact when recruiting players four decades later.

“When I think of Phi Slama Jama, I think of success. But as far as recruiting, you never talk about it or never mention it because it’s not relative to these kids today,” Sampson said. “But it is relative to the program. I think you should honor the past, but don’t live in it. Live in the future. Live for today.”

Houston is playing in its seventh regional final. The Cougars won the previous six, making it to the Final Four every other time they have gotten this far in the NCAA Tournament.