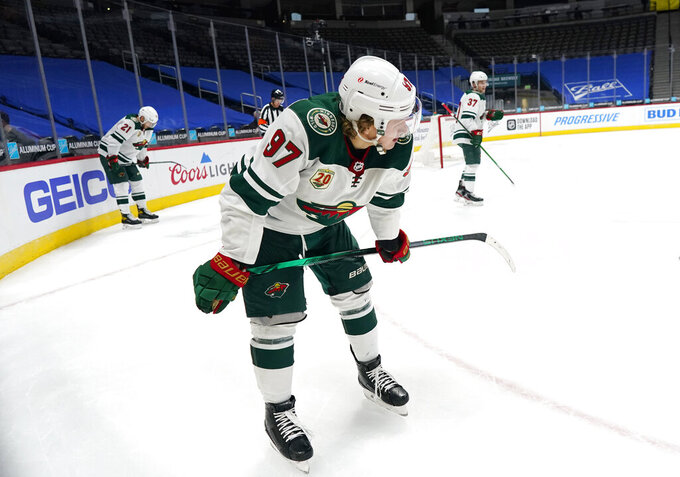 The Minnesota Wild have been cleared by the NHL to resume team activities.

The Wild will practice Friday at Xcel Energy Center, 10 days after their most recent game. They’ve had six games postponed due to COVID-19 cases within the team, including Saturday at Los Angeles. Their next scheduled game is Tuesday at Los Angeles.

The Wild have 12 players still listed by the league as being unavailable due to COVID-19 protocols. Forward Marcus Foligno was removed from the list. He was the first player to enter quarantine on Jan. 31.

The Big 12 has announced the reschedule dates for nine women’s basketball games postponed this season because of COVID-19 protocols. The makeup games will be played during a nine-day span that includes the week before the conference tournament.

Kansas State has four makeup games, starting Feb. 27 at No. 7 Baylor, the 10-time defending Big 12 champion. The Wildcats will also host TCU on March 1, and West Virginia on March 3 before playing in the league’s final regular-season game March 7 at Oklahoma.

The Sooners and Kansas both have three makeup games, while Baylor, TCU and West Virginia have two each. Texas and Iowa State only have one, while Texas Tech and Oklahoma State have none set before the conference tournament March 11-14.

North Carolina Central says it will eliminate baseball after this season.

The school announced the move Thursday, citing an increase in athletics expenditures from the past four years as well as the financial impact from the COVID-19 pandemic. The school says the decision to discontinue one sport will improve “the overall fiscal stability” of the athletics department’s budget while also improving resources available for the remaining 14 sports programs.

The school said it had taken measures to cut operational costs by 30% since March 2020 to manage the impact of the pandemic, which included eliminating positions and furloughs. The school cited Title IX equality considerations in the decision to eliminate a men’s sport, with the decision leaving the Mid-Eastern Athletic Conference program with seven men’s and women’s sports each.

The school will honor existing and new scholarships for baseball players who wish to remain at the school for the 2021-22 year.

In a statement, athletics director Ingrid Wicker McCree called it “a challenging day” and said the decision came after “a rigorous internal and external review of our financial model.”

The NHL says an Edmonton Oilers player went into COVID protocol and that the start time for the team’s game at Montreal scheduled for Thursday night has been pushed back an hour to allow for the completion of test results for other members of the organization.

The league’s seven teams in Canada had been without a virus-related disturbance until now. There have so far been 35 games postponed, all in the three U.S. divisions.

The Atlantic Coast Conference announced Thursday that Louisville's men's basketball game at Virginia Tech scheduled for Saturday has been postponed due to COVID-19 concerns.

The postponement is the fourth in a row for the Cardinals and follows the continuing quarantining and contact tracing within the men’s program. Head coach Chris Mack is among those who tested positive and was slated to miss the game.

The team is adhering to ACC protocols.

The game has been rescheduled for March 3.

The U.S. Olympic wrestling trials will be held April 2-3 in Fort Worth, Texas, where a limited number of spectators will be allowed at Dickies Arena.

The trials, originally scheduled for April 2020 before the Tokyo Olympics were postponed a year, had been planned for the Bryce Jordan Center at Penn State. USA Wrestling had to move the trials because of COVID-19 restrictions on capacity that spokesman Gary Abbott said wouldn’t accommodate participants, let alone spectators.

The trials will determine who becomes eligible to represent the United States in the Olympics now scheduled to begin in late July. This will be the fifth straight U.S. Olympic Team Trials in which all three Olympic wrestling teams — men’s freestyle, women’s freestyle, and Greco-Roman — will be determined at the same time.

Capacity at the Bryce Jordan Center would have been capped at 500 in the arena and 150 in the practice gym because of current COVID-19 restrictions. USA Wrestling plans to hold its 2024 trials there.

Saturday’s men's basketball game between Texas A&M and Florida has been postponed due to COVID-19.

A combination of positive tests, contact tracing and subsequent quarantining of individuals within the Texas A&M program caused the change.

The postponement is consistent with Southeastern Conference COVID-19 management requirements.

It's the third straight Florida men's game affected by the coronavirus. The Gators' second game of the season against LSU last Saturday also was postponed.

No makeup date has been decided on for the game with the Aggies and there are just three weeks left in the regular season.