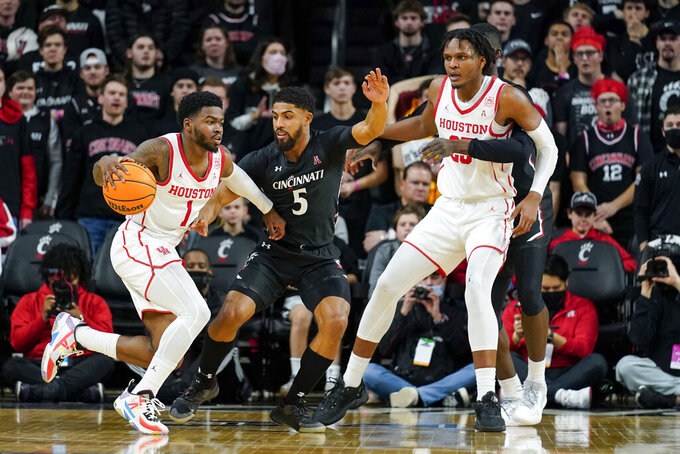 “We take a lot of pride over the years, once we get into February, to get better,” Cougars coach Kelvin Sampson said. "Not focused on our record as much as just getting to the next game. We had a lot of guys play well tonight, not just Fabian.”

David DeJulius scored 18 of his 25 points in the first half for the Bearcats (15-7, 5-4 American), who dropped their fourth straight to Houston.

“We got our butts kicked tonight,” Bearcats coach Wes Miller said. “Tip your hat to Houston. They did some good things offensively. They guarded the heck out of us. We knew that was going to happen.”

Houston was dominant from the opening tip, which Moore converted into a two-handed dunk. The Cougars went 10 of 15 from the floor and 4 of 5 from 3-point range to start.

“They play inspiring basketball,” DeJulius said. "They hit the glass hard. They play together. They showed why they are the sixth-ranked team in the country.”

A 3-pointer by White and a steal and dunk by Edwards made the score 20-3 with 14:02 remaining in the first half, prompting Miller to call his second timeout.

The Bearcats, meanwhile, had two field goals in the first nine minutes.

Houston outscored the Bearcats 38-18 in the paint.

"Everybody counted us out when Marcus (Sasser) went down," White said. “It's a matter of pride for us. We were just playing basketball out there today. We're getting into the meat of the schedule. It's all about the next game.”

The Cougars led by as many as 21 points in the first half, but the Bearcats managed to cut their halftime deficit to 42-31 behind DeJulius’ 18 points.

“We thought we were going to come out after halftime and make a run,” Miller said. “They made it tough on us defensively.”

Cincinnati couldn't take advantage of Houston's second-half foul trouble or a knee injury to Shead, who limped off with nine minutes left and didn't return.

“Our fast start tonight was more of a byproduct of our preparation,” Sampson said. “We walked a tightrope with fatigue and foul trouble. We got tired in the second half.”

White tied Michael Young for first on Houston's career wins list with 109. Young was a part of 109 victories from 1980-84 including two national championship game appearances.

“Fabian would be the first one to tell you it’s about the team, not him,” Sampson said. “As a senior, he’s playing his best basketball. Been with him for five years now. Just thrilled for that young man.”

Houston: The Cougars have continued to win despite losing leading scorer Sasser and perimeter shooter Tramon Mark to season-ending injuries early in the season. The Cougars' depth was tested further Sunday when both Edwards and Moore picked up their fourth fouls early in the second half and Shead left with a knee issue.

Cincinnati: DeJulius has been carrying the Bearcats lately, averaging 18.5 points over his last five games. In the previous two games, he scored the team's final seven points in a loss to Temple, and had the game-winning put-back with 3.7 seconds in a win over East Carolina.

“Coach Miller instilled the confidence in me,” DeJulius said. “I just want to stay aggressive.”

Houston: At SMU on Wednesday.

Cincinnati: At South Florida on Wednesday.